Television. It has changed our lives in some shape or form; for most of America, that shape or form seems to be round. Ba dum bum. Always open up with a joke, thank you Henny Youngman.

As the market slowly morphs into handheld devices and moves from stationary living rooms to going (thank you Pete Townsend) mobile, I was asked to reflect on how exactly my life has been changed by the tele, the idiot box, the boob tube, groove tube, teacher, mother, secret lover.

I was obsessed in a way. I even told time in 90-minute increments

In the mid-’70s, the cultural landscape of television was drastically different. Home Box Office still had its diapers on and the eventual war between VHS and Beta was nothing more than a few outlining skirmishes. Movie studios had very little use for their libraries after movies left the theaters. Save for the occasional revival screening, they were more times than not left to rot on shelves.

Daytime television consisted mainly of game shows and soaps, and by the late weekday afternoon, it was a barren wasteland. You were either catering to the after-school kids, John Travolta in a bubble or biding your time until the six o’clock news, when fathers around the country started coming home and pulling up a Swanson to said boob tube.

Not wanting to wade into the Scooby Doo market or the high waters of Gilligan’s Island reruns, ABC was airing The 4:30 Movie. Ninety minutes of movie gold, Monday to Friday. I am sure in some sense that the upper executives, more keyed in to prime time demographics, spared little time to oversee what the programming directors where doing as they selected what movies they would show.

Left up to their own devices, the programmers went to geek town, and I was more than happy to hitch a ride. And that ride, my friends, was awesome.

They would consistently hold theme weeks. Monster week. Horror week. Western week. A goddamn Planet of the Apes week! A veritable chimpan-A to chimpanzee. But even beyond the genres, there were star weeks. Burt Reynolds week. Irwin (the master of disaster) Allen week. I hold a great debt of gratitude to those programmers.

Beyond the obvious love of horror, The 4:30 Movie exposed me to films I would never have gotten a chance to see without them. The Blob? Check. Earthquake? Check. The original TV movie, Don’t Be Afraid of the Dark? Thanks to that creeper? Um, check. The original hooker with a heart, Gigi? Double D check. 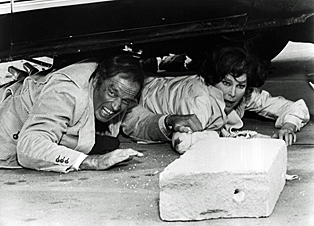 And when a movie was truly a big Hollywood blockbuster, à la Earthquake or The Poseidon Adventure, it was split up over the course of two days.

Now, these movies were by no means uncut. They were edited for television. But when splitting a movie up over the course of two days, editing for content usually meant you were left short for program length. In order to make up time, the programmers would dip into scenes that were originally cut out of the movie and splice them back in.

Yes, The 4:30 Movie provided me my first glimpse into deleted scenes. The original Easter Eggs. Up until then I was like every other kid. What was shot was what you saw. But nope. After that and for years that followed until the laser disc, I would scan TV airings of favorite movies in hopes of seeing something that I hadn’t seen in the theatrical cut. The televised versions of both Carpenter classics, The Thing and Prince of Darkness? Nearly unrecognizable shells of their theatrical personas.

Back then, especially for a kid that lived for movies, there was no way to tell what was going to air beyond the primitive yet strangling confines of the weekly television guide that came with the Sunday paper. This was usually the first section I would tear into on a Sunday morning, figuring out what was to air and scheduling my week around it. I was obsessed in a way. I even told time in 90-minute increments.

The 4:30 Movie also laid the framework for me to begin tracking filmmakers. With no obvious film reference database at my fingertips, I would learn about filmmakers and stars through these films. Coming off Smokey & the Bandit, I was on a huge Burt Reynolds kick. So you bet your sweet CB radio there, good buddy, I was front and center for Burt week, with White Lightning and The Longest Yard.

But the real one was Deliverance.

I can remember the “coming up tomorrow” preview, and the shot of the hand emerging from the water in Jon Voight’s nightmare, fingers curled in a painful rage – I was sold. 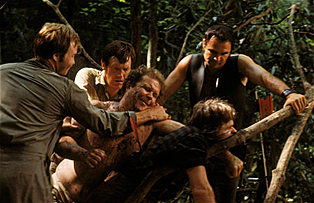 As the movie unfolded, I did not know what the hell was going on, but I knew this was something far darker then I had ever encountered. This was the ’70s, and the evil that was out in the world was talked about in hushed tones. I was always ushered out of the room when tales of Vietnam and the unraveling of America took place. But here, these men on a rafting trip were facing evil, and I was along for the ride.

I mean, come on – a 9-year-old? Trying to make sense of what those men were doing to poor Ned Beatty through the chopped-up censor editing? Imagine the look of horror on my mother’s face when I asked her what squealing like a pig meant. It would be another 10 years before I ever did find out, but I did know one thing: Three-toothed, banjo-playing mountain men were evil incarnate.

These were the seeds for me. I liked this movie. I liked the edge-of-my-seat feelings it gave me. It was like movie puberty for me.

When HBO started running Excalibur (oddly, a PG version during the day and a more explicit R in the p.m.), I was there – partially for the chrome-domed Merlin but mostly for John Boorman.

I even remember that after the horror of the Deliverance pig question, I began incorporating my mother into the experience as she spun stories of her youth, as Earthquake spilled out in front of me. They used to mine the theater walls with extra-large speakers for Sensurround, so that the theater would actually shake during the earthquake scenes as Charlton Heston dodged rocks that for some reason bounced on the TV but not on the playground macadam. In a quasi-mimicry, I would crank the volume during these scenes on the television, imagining the walls of my house shaking only to have my mother come screaming into the living room.

She even saved me once. The 4:30 Movie took me to see Steve McQueen fight off the gooey blob, while outside a thunderstorm raged. The next day, in the backyard of a friend’s house, I played on a rusty swing set. I was swinging too high, and the set started to tip; what oozed out the bottom of one of the metal cylinder legs was a rainbow nightmare of rusty water goo. Only to me, it wasn’t rusty water. It was the mother-freaking blob. 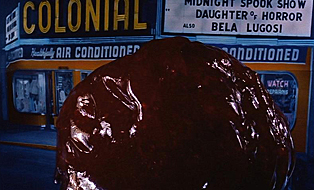 I ran screaming all the way home. After several restless nights, my mother explained to me that the movie Blob was really made of Jell-O, and after they finished filming, the whole cast sat there at a party, each with a spoon, and dug in. The thought of Steve McQueen eating his way through the Blob made me giggle and I was cool. Night terrors gone.

I could go on about any movie and some wild mental adventure, the horrors of William Holden staring at me from a swimming pool telling me he was already dead, Gertrude the duck being murdered hundreds of miles below the surface of the earth and on and on. But I’d be remiss if I didn’t mention the opening animation, where a dark, silhouetted man sits behind some sort of device, frantically spinning a dial, edges glowing, music swelling. We spin around him until we enter the front of the device and the title card comes up.

I didn’t know if this thing was a camera or a projector or what (hey I was a kid!). It looked like a camera from what I had seen in Famous Monsters of Filmland, but it also seemed to show me things as well. It was like my very own TARDIS, granting me access to faraway lands and amazing stories.

In later years, I would understand that they had animated a camera for the opening, but still the dichotomy lingers. Was it shooting something magical to show me for that day’s adventure or was it about to project one?

It didn’t matter. I was hooked. If this was the life of making movies, telling stories in a visual format, then I had to get me one of those things.

Networks were keying into a larger afternoon demographic. Talk shows had started turning an ugly light on to the family issues in the once-believed heaven of suburbia. It was cheap, fast, a train wreck of emotions, and there was money to be had. The studios caught on as well, with VHS the winner of the home video format; they could release old titles on these little cassettes and make money off them. In the beginning it didn’t matter what was being released, you were going to rent it. 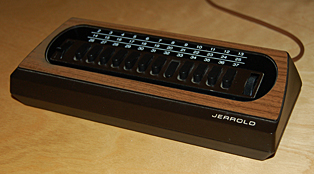 Then the day came. Flipping through the Sunday papers, looking for the television guide. Flip it open to Monday afternoon and where in the wide world of sports is my movie? Surely it was a mistake! Go to Tuesday. No. Wednesday. Nope, nope and nope. The last broadcast of The 4:30 Movie came in 1981. Its replacement? The gavel that banged the death knell for my beloved afternoon delight? Good old Judge Wapner and The People’s Court.

But it’s okay. In reality, I had already moved on by then, having been exposed to the cinema tastes of Carpenter, Corman and Raimi and all those nasty beasties they dredged up from their nightmares. Afternoon television watching had gone by the way of little boys and snips and snails and puppy dog tails.

I could say a part of my childhood died then, but that would be too Rockwellian. The foundation had been laid. I was a walking IMDB before I even knew what it meant and I was firmly rooted on the path to finding my own camera/projector TARDIS.

When I come across one of those old films today, I’d be lying if I said that not only do I remember the movie but also watching it on The 4:30 Movie. But it formed the foundation and introduced me to some great (and some not-so-great) movies that kids since do not really get exposed to. It was by no means the sole reason why I ventured into visual storytelling, but it certainly has its place.