There is a little-known story from the history of The Monkees, the band that were a bunch of TV executives’ answer to the overwhelming popularity of The Beatles. They were initially hired just to sing the songs and be the faces of the show. Over time, the band wanted to show they were more than pretty faces/actors and started demanding to play on their own songs, as well as perform live as a real rock ‘n’ roll band. So, out they went on tour. 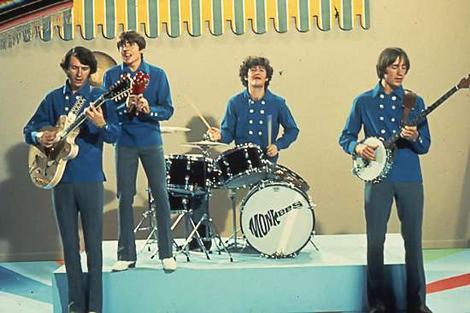 Now, whoever put the tour together picked an opening act that had started to gain acclaim in England and, on the basis of that, wanted to play in America. All the promoter knew was this was pop music too. So, imagine the scene when, in front of an audience of mostly young teen girls and their parents, Jimi Hendrix is doing his opening spot, complete with guitar humping and the like.

And that’s as good an intro to the wonder that is 33 1/3 Revolutions Per Monkee.

I’m guessing this was the band’s attempt at some sort of A Hard Day’s Night/Yellow Submarine hybrid, to showcase their various talents, and prove they were a real rock band, with real rock friends, not the commercialized commodity they were originally intended to be. The TV special, as weird and haphazard as it was, did feature a number of guest stars, including Jerry Lee Lewis, Little Richard, Fats Domino and The Buddy Miles Express.

Billed as guest stars, the film begins (and frankly revolves around) Brian Auger as a keyboard wizard and Julie Driscoll as his…. assistant/caterwauling singer. There is a thin-thread of a plot, mostly about how the band members are birthed in test-tubes, turned into automatons (giving up their identities to become Monkee #1, Monkee #2, etc.) and their subsequent quests to regain their identity, musical integrity and self-determination. Any resemblance between this and the band’s tumultuous history with creator Don Kirshner is, I’m sure, well and fully intended.

The bits in this movie featuring Charles Darwin…well you just have to experience those for yourself. 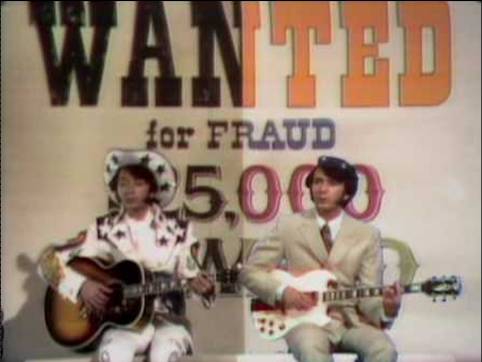 Each member gets a little surreal solo, from Mickey Dolenz’s bizarre R&B styled cover of “I’m a Believer” (complete with Julie Driscoll’s half-Grace Slick/half banshee vocals) to Peter Tork’s hippy wow-ness “Prithee (Do Not Ask for Love)” (you can tell when the 60s wanted to get trippy/spiritual. Sitars were involved. I think it was a law back then). The most interesting is Mike Nesmith’s duet (with himself, via Blue-screen) on “Naked Persimmon (The Only Thing I Believe Is True)” where Rhinestone Cowboy Mike and Slick L.A. Mike make fine music together. The most disturbing is Davey Jones, who appears in a Little Lord Fauntleroy suit, dancing with fairy-tale characters on a kid’s room set with out-sized props, so the dancers look extra toy-like, as he sings “Goldilocks Sometimes.” What these segments mean, I don’t know, but there is a playfulness here that is enjoyable, in a strange sort of way.

Just in case their rage against their own artificial origins is not clear enough, the band next performs “Wind-Up Man”  as mannequins. The metaphors just swim around like whales in a  fish-pond, but the sequence does feature a four piano stack, with Fats Domino, Little Richard, Jerry Lee Lewis and finally, on top, Auger. Yeah, I know…the black men are always the bottom of the stack. I hope that was the intended metaphor for how black musicians were really the innovators and base of Rock ‘n’ Roll.

There are a lot of great musical bits to this special, whether it is the band’s medley of Rock ‘n’ Roll Classics or Peter Torks cover of a Bach piece towards the end. It all culminates is a nice cover of “Listen to the Band” which showcases the bands’ talent (even when it descends into a typical 1960’s cacophony at the end). The Monkees truly were more than their intended use would imply. They were an actual band, made from talented, capable musicians who deserved more credit that they ever got while they were a current presence in music.

This story originally appeared on Network Awesome and is reprinted here in a slightly edited form with their kind permission. The author, Ryk McIntyre, is a multi-hyphen sort of person. Poet, critic, performer, workshop facilitator and co-host at both GotPoetry! Live (Providence) and Cantab Lounge (Cambridge, Massachusetts). He’s been living in Rhode Island for the past six years with his wife and daughter. Ryk has performed his work at Boston’s ICA, NYC’s New School, Portsmouth, NH’s Music Hall and Lollapalooza, to name just a few. He has toured the U.S., performing in countless poetry open mics and festivals. He turned down Allen Ginsberg once.

Watch TV and Have a Couple of Brews
Previous Post