Star Trek is a story about humanity. Our hopes, our dreams, our strengths and our weaknesses. At its core, it’s about being better versions of ourselves.

That doesn’t quite mean everyone in this storybook galaxy is benevolent.

Star Trek is populated with dark, sinister characters. Races and individuals who will sacrifice anyone and anything to get what they want most. Gene Roddenberry’s creation may have celebrated goodness, but it was seasoned with a fair amount of rotten apples.

Yet which of them really stand out? Which of these bad mama jamas are ones we look back on and remember?

To my surprise, not very many. As I boldly went in search of truly villainous villains, I found that while Trek has plenty of thugs and bad guys, it really doesn’t have very many real effective villains. People who are dastardly and wicked, who seek out nothing but pain and misery.

Mind you, that’s not really what Star Trek was about. The bad guys, while there are several, were mostly just castoffs. Random players, most of which were destined to be sent off into the ether, never to be heard from again.

I struggled and weighed each series, examined each bad guy, and aimed locked phasers on my Top 5 Star Trek Villains: 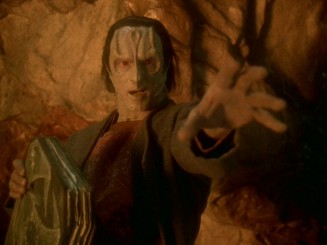 1. Gul Dukat – A kind of space-age Adolf Eichmann, Gul Dukat was both a brute and a gentleman. A killer and a savior. A hero and a nemesis. Over the course of seven seasons on Star Trek: Deep Space Nine, Dukat (played with relish by Marc Alaimo) started as a cruel thug carrying out oppressive and inhumane orders to a rebellious freedom fighter, and ultimately ended up a bitter, vindictive, power-hungry sociopath with delusions of grandeur. Like Hitler and his dogs, Dukat had an affection for his children and a love for Bajoran women, but none of them meant more to him than his own self-importance and lust for power. Peel away the layers that were woven to make the Cardassian overseer a rich, vibrant character and you were left with dark hatred and pure, ugly racism. Dukat tormented nearly every good person on Deep Space Nine, and in the end tried to destroy the very fabric of Bajoran culture. His self-interest made him a cunning adversary, and the perfect foil for Capt. Benjamin Sisko. There is no question that of the villains in Star Trek, he ranks No. 1. 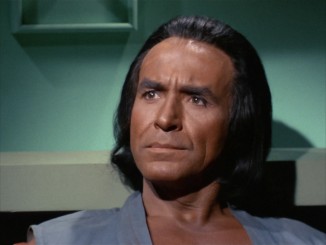 2. Khan – It is impossible to think of Star Trek bad guys and not bow your head to Khan Noonien Singh. He was physical perfection and mental superiority. But as we often learn, power corrupts. Khan’s vast intellect and unmatched capabilities bred arrogance and narcissism. A warped sense of entitlement that led him to believe that since he was better, he must rule. And he didn’t have the time or patience for people who didn’t agree. He had the distinction of facing off with Capt. James T. Kirk not once, but twice. And in those two encounters he cemented a place for himself as one of Star Trek’s most villainous villains. Played with an over-the-top sense of control, Ricardo Montalban gave us two versions of Khan. In The Original Series‘ “Space Seed” he was the sharp, focused tactician. A keen mental giant among sheep. His defeat, however, left him isolated on a planet that would shortly be destroyed. He and a few of his followers survived, left to fend for themselves for years in a desolate environment. That experience twists his mind, and what we’re left with is the cold, bitter Khan we see in Star Trek II: The Wrath of Khan. Twisted and broken, he seeks out revenge upon Kirk and in doing so succeeds with the death of Spock. He strikes out and hurts Kirk in a way no bad guy had ever done before. This cruel effectiveness, along with his charm and impressive chest muscles, makes him a very bad man.

3. Borg – Unlike the others on this list, the Borg is not a character but a collection of characters. Their sameness made them frightening to a Federation society that celebrates individuality and uniqueness. The Borg strived to make everyone uniform, to make each person the same, and to have all people work towards a single goal – the unending obsession to improve. To take what others have, keep what is effective, discard the rest and leave nothing behind. It was a selfish, hateful objective that stands in stark contrast with what Star Trek is all about. The Borg were also powerful, clever and menacing. The things that made them such effective bad guys got chipped away over time, however. The concept introduced in Star Trek: First Contact of a Borg Queen perhaps had some logic to it, but did little to help make the Borg more of a threat. It actually made the drones seem less intimidating, and more like pawns. This idea continued in Star Trek: Voyager. But it would be in the one-off episode of Star Trek: Enterprise that we would rediscover the Borg in all their creepy power. Like Khan to Kirk, the Borg were one of the few villains to make a lasting impression on one of the franchise’s central heroes, Capt. Jean Luc Picard. By capturing him and stripping away his humanity, they took away all that he was and used his knowledge to kill and destroy. This left him with a guilt and an anger that poisoned him for years. The Borg as a race are unmatched by any other in Star Trek for their dastardly deeds. 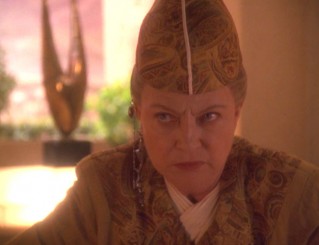 4. Kai Winn – When a person gains the taste for power, sometimes they find themselves drowning in it. That’s the story of Kai Winn, the twisted Bajoran religious icon whose faith never extended beyond her own selfish goals and desires. A sadistic opportunist, Winn never missed a chance to advance her own agenda. But what makes her so efficient as a villain is her ability to maneuver her way through events. She schemes and plots throughout the seven seasons of Deep Space Nine, yet weathers every storm no matter which way the wind blows. What makes the character all the more delicious is the smooth, charmed delivery of actress Louise Fletcher. Winn is graceful and elegant, yet always hidden beneath is Nurse Rachett carefully doling out her own brand of sanctimonious manipulation. Winn’s only failing is her need to be loved. It’s a flaw that undoes her several times, and ultimately leads her to become victimized by Gul Dukat. But this weakness also makes her all the more dangerous as a villain, because it’s a childlike quality that makes her – at least on a certain level – sympathetic. The dynamic causes her to be not only one of Star Trek‘s most compelling villains, but also one of its best-crafted characters.

5. Kruge – Star Trek is littered with Klingons. There are bald ones and fat ones, tough ones and weak ones, ridged ones and flat ones. But, for me, there is only one that captures the pure, unforgiving Klingon as they were originally conceived. Kruge, the devious rogue commander who faces off with Capt. Kirk in Star Trek III: The Search for Spock. Played with perfection by Christopher Lloyd, the character drips with venomous thirst for brutal power. He’s unapologetic in his violent obsession with the ultimate weapon, the Genesis torpedo (designed to create, but better at destruction). And in his thrust to gain that power, he doesn’t let anyone stand in his way, including the infamous Kirk. The result of Kruge’s warpath is the second of Kirk’s greatest losses, the death of his son. Kruge doesn’t take the life of David himself, but coldly orders it without even knowing who was being murdered. Yet his actions cut into Kirk like nothing else could, causing the hero to stumble in the captain’s most honest, vulnerable onscreen moment. This is what makes Kruge stand out: he is the antithesis to the hero. The anti-Kirk. And when these two immovable objects collide, the wreckage and carnage is epic.

Now, some may have noticed there is someone missing here. A one-lettered character who is probably included in every other list like this.

Well, there is a reason for that. He’s not a villain. 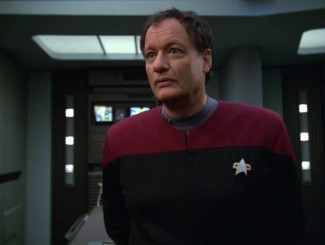 Hands-down one of the most popular recurring characters in all of Star Trek, this multifaceted character is a lot of things. And perhaps at one point he could have been considered a villain. But ultimately Q really isn’t.

When the omnipotent troublemaker first appeared in the Star Trek: The Next Generations‘s pilot, “Encounter at Farpoint,” he was definitely the villain. Dark and sinister. But that depiction all but vanished in subsequent appearances. While it was suggested he committed vicious acts as a means to entertain himself in the past, we never really see any of this. Instead we’re given an impetuous imp who takes pleasure in causing problems for the Enterprise crew. But in most of his appearances on the series, he’s not actually the real threat. And when each encounter ended, he never actually did anything to the characters that wasn’t completely undone in the end. In fact, he even helped them several times.