In the previous issue of Amazing Spider-Man, one of Peter’s colleagues at Horizon Labs opened a portal to 24 hours into the future. What he saw was the total destruction of New York City. Given just hours to figure out how to save everyone, Spider-Man swings all over the city, trying his hardest to avoid a catastrophe he can’t locate. The issue ended with Peter’s time running out as he waited for the world to end. So when I opened this issue, I couldn’t wait to see how Slott was going to resolve one of his best cliff-hangers. The resolution, however, sucked. And this issue was a slap in the face to Spidey fans. 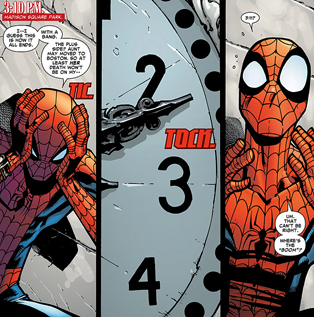 Previously, Peter realized he had exactly until 3:11 to stop the impending disaster. Unfortunately, at 3:11 he still didn’t know what he had to do, so he wrapped his head in his hands and waited for the inevitable end. How did he survive? The analog clock he found didn’t say whether the catastrophe happened in the afternoon or the morning.

So Spider-Man buys himself 12 more hours, only to find out that in order to save New York, he just needs to close the portal opened by his colleague (which he does, and everything goes back to normal).

Had the issue not opened with such a cheesy resolution to the previous issue’s cliff-hanger, I might have enjoyed the story more. The best part of the comic was Peter’s date with Mary Jane, as she reminds him that the only thing he needs to save anyone is to have faith in himself. It seems corny, but their conversation really highlights the one thing that makes Spider-Man such a great character – he welcomes the aid of people around him during crisis rather than working alone (like Batman).

The art doesn’t help, either. Humberto Ramos’ pencils are too cartoonish and a bit silly at times. Take Peter’s colleague Grady, for example. He looks like a chipmunk. Considering the gravity of the situation, staring at a man who looks like he belongs on a Saturday morning anime show doesn’t instill a feeling of angst or tension.

Instead, I just wanted to punch him in the face.

You hurt me today, Dan Slott. I won’t stop reading Amazing Spider-Man because of one issue, but you know the cliché about being fooled.

There are plenty of other comics to read, and at $3.99 an issue, I just don’t think this was worth it. 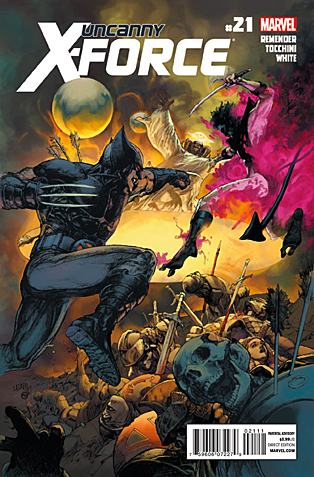 A while ago, my cousin had told me to read Uncanny X-Force. It’s only recently, though, that I got into the series. While I know Rick Remender for his work on Venom, Uncanny X-Force is by far the better book. Spinning off of the events from the first four issues in the series, Remender now turns the story to Fantomex, who, in order to stop Apocalypse from becoming a threat to the world, killed him as he appeared in the form of a boy. Captain Britain is now making him stand trial for his crime. This isn’t a great issue, per se, but it’s still a strong outing by a talented writer.

After being imprisoned in a containment unit that renders him incomprehensible, Fantomex is saved by Psylocke (who is decked out in her Lady Briton costume). She brings Fantomex to Krokwel, a godlike servant of Otherworld. She begs Krokwel to help her companion, but it seems that if he does, the trade-off will be quite costly – for Psylocke. Meanwhile, Nightcrawler comes to the aid of Wolverine and a decapitated Deadpool. As they try to escape, they find themselves surrounded by a group of warriors who turn out to be led by Meggan Puceanu, Brian Braddock’s lover. She offers to help them by taking them to the mysterious Demon-monk, whom it seems she wants defeated – with Logan’s help.

The issue is mostly setup for future events, and while it feels weak after the incredible “Dark Angel Saga,” the story has a good pace and Remender does a nice job of bouncing back and forth between Psylocke and Logan.

After being rescued from Apocalypse’s curse, Warren Worthington, also known as Angel and Archangel, loses all of his previous memories, including his romantic affiliation to Psylocke. Previously, Fantomex had revealed to Psylocke that he had feelings for her, and while she shook him off, her need to save him could reveal a deeper motivation involving love for him. I’m not interested in love triangles, but the buildup for this one has been planted since the first issue, so it’ll be interesting to see how it plays out.

Also, Deadpool has the best lines of the issue, most of them laugh-out-loud funny. I don’t like how Deadpool is written in other series – many writers make his stories more slapstick than clever. But Remender crafts Deadpool’s dialogue in a way that shows he’s bright and witty. He’s not funny because he’s foolish (but he can be). He’s funny because his non-sequitur statements often break the tension of the issue. Remender has made Deadpool a vital asset to the X-Force team rather than the stereotypical comedic character.

My only complaint about the issue is Greg Tocchini’s art. It’s not bad, but compared to Jerome Opeña’s sharp pencils, the issue looks muddled. It appears to have been drawn with marker and it contrasts sharply with the previous images. It’s a minor complaint, but it’s a noticeable difference in style and one that detracts from the issue.

Still, Uncanny X-Force is a fine read. It has great characters, awesome dialogue and an involved story that feels connected and important. If Remender has proven anything with this series it’s that he has a deep history of X-Men lore, and he’s not afraid to flash his writing chops. 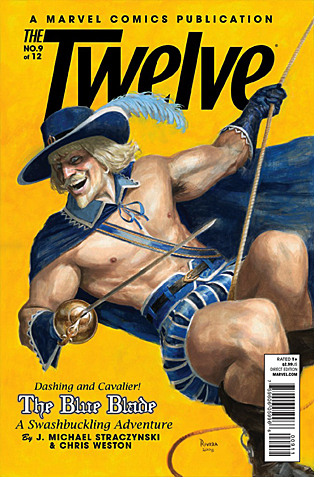 Bannen’s Book of the Week: After being on hiatus since November of 2008, The Twelve has finally returned in all its wonderful glory. For those of you who are unfamiliar with the story, here is a quick synopsis: The Nazis imprisoned a group of 12 heroes in cryogenic suspension back during World War II. They remained frozen until 2008, when they were finally discovered. The story follows their attempts at adjusting to our life, as well as trying to solve the mystery of which one of them is going around killing ordinary citizens. The characters are not original creations. Straczynski delved back into the Marvel archives to uncover them, and he crafted a story around a group of characters who appeared during the comic boom of the 1940s (yet disappeared just as quickly). With echoes of Watchmen, The Twelve takes a look at the secret lives of these heroes and the dark secrets they each hold. Brilliantly crafted and beautifully drawn, this series will go down in history as one of the seminal texts every comic fan should own.

As indicated by Paolo Rivera’s stunning cover, this issue focuses on the Blue Blade (aka Roy Chambers), an Errol Flynn-type hero who takes the future in stride, even capitalizing on his fame to create a television show. Roy has discovered a secret about one of the members of The Twelve – the robot Electro, who can only be controlled through a machine that links it to the brain of its creator. But Electro has been operating seemingly without a handler, and Roy thinks he’s discovered how. But before he can reveal the truth, Electro attacks Roy and, despite his best efforts, Roy is thrown to his death.

The story then turns to Richard Jones, also known as the Phantom Reporter. A detective-like character, Jones has been attempting to figure out the initial mystery of why the heroes were trapped, as well as who has been using Electro to kill – and why. When he goes to the scene of the crime, Jones hooks up to the mental link machine that Electro’s handler used to control him. He sees a few snippets of the past, and in the end, it looks like Jones has discovered Electro’s secret. But before he can tell anyone, he passes out.

Thrown into this mix is Mastermind Excello, a mentalist with the ability to see the future. According to Excello, the heroes are approaching their end, and in the final pages of the issue, one of the heroes reveals a pretty dark secret that explains how his power came to be.

When The Twelve first came out, I didn’t read a single issue. I read a review somewhere that compared it to Watchmen, so I went to the comic store and picked up the first issue. I drove home and read it, then turned around and went right back and bought the rest of the series. Unfortunately, two months later, The Twelve went on an indefinite hiatus. Thank God it’s back. I don’t think I could take not knowing how things will turn out.

What makes the series so good is its character development. Each member of the groups is as engaging as the next, and each has his or her own baggage. This is the best work Straczynski has done in years, and it more than redeems him for his mediocre runs on both Amazing Spider-Man and Superman.

The comparison to Watchmen is apt, as both are character-driven stories with meta themes on comics and comic characters. I wouldn’t call Weston’s art stylized; rather, like Dave Gibbon’s illustrations for Watchmen, Weston renders the characters to look as lifelike as possible. He constructs every panel and every drawing in a way that perfectly conveys the humanity of the piece. In tandem, Straczynski and Weston have created a work that I would deem literary in both its story and presentation.

I could go on and on about this, but instead I’ll just make a plea: Read The Twelve. It has the same ambitious and monumental feel as Watchmen, as well as a timeless quality that makes it one of those series that people will read and analyze and read again. With only three issues left, the mystery of The Twelve will finally be revealed, and it’s one I do not want to miss.

And neither should you.