Dark Horse Comics’ Usagi Yojimbo: Traitors of the Earth is the latest chapter in Stan Sakai’s ongoing saga of Miyamoto Usagi, a rabbit ronin who wanders a world very similar to Japan’s Edo period. Usagi is on a musha shugyo (warrior’s pilgrimage).The narrative has followed this path since 1987 and it’s just as fresh in this latest volume as it was in those Fantagraphics stories.

Influenced by the cinematic works of Hiroshi Inagaki and Akira Kurosawa as well as Sergio Aragonés’ Groo the Wanderer, Usagi Yojimbo is violent without being visceral – humorous without being childish – tragic without sappy melodrama. Sakai explores themes like friendship, honor and Japanese folklore throughout this volume.

Whether drawing young Usagi skipping stones in a pond or a double-page spread of an ancient samurai battle, Sakai uses every panel to tell the story. Nothing is wasted! 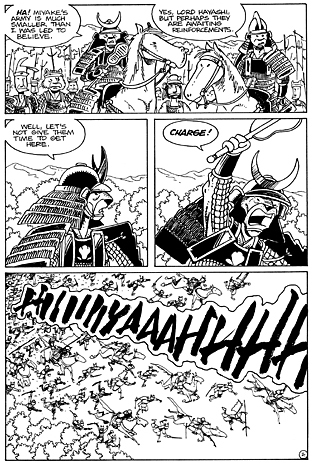 In his introduction, Walt Simonson compares Stan Sakai’s work on Usagi Yojimbo to Carl Barks’ work on Donald Duck. It’s an astute observation beyond the obvious anthropomorphic similarities. Both artists take great care to service their stories first – building worlds and characters that readers read and re-read for decades.

Sakai’s work on this volume is a master class in storytelling. The book opens with a tale of young Usagi. He’s with Katsuichi-sensei, skipping pebbles in a pond. His sensei, who is meditating, chastises young Usagi and proceeds to tell him a story of a foolish woodcutter who loses his axe in a pond. Visually, Sakai plays a game with his readers, having the flashback panel structure mirror the present. Just as Usagi tossed pebbles into the pond, so too did the woodcutter – cursing the pond. In doing so, the woodcutter awakens the kami of the pond. The anger of the kami and annoyance of the sensei mirror each other. It is a game Sakai plays later (to great effect) in the titular story, “Traitors of the Earth.”

The story “A Place to Stay” begins with five panels of swords clashing and pained assassins. The panels transition to a three-quarter page splash of Usagi besieged by assassins. He’s on the run and he’s fighting for his life.

The final story in this collection has massive importance to Usagi’s overall narrative. He encounters an old friend – Masaki. Masaki is also a samurai who was under the command of Usagi’s former master, Lord Mifune. It’s a tale of Usagi and Masaki’s attempt to avenge Lord Mifune by assassinating Lord Hikiji. It’s an excellent one-issue tale that adds an important thread to Miyamoto Usagi’s tapestry.

In addition to the collected comic book stories, the Traitors of the Earth hardcover features extensive and fascinating supplemental material. Comics legend Walt Simonson provides an introduction that reminds readers just how important Usagi Yojimbo is to the comic book form. Stan Sakai’s story notes provide context for some of the folklore and design elements throughout the book. And as always, there’s a gorgeous cover gallery.

Usagi Yojimbo: Traitors of the Earth is everything that’s good about comics. This is the 26th volume of the series and it collects “Usagi and Kami of the Pond,” “Cut the Plum,” “Traitors of the Earth,” “What the Little Thief Heard,” “The Hidden Fortress,” “A Place to Stay,” and “The Death of Lord Hikiji.” It’s 176 pages of story plus the bonus features, which also include “Groo vs. Usagi: Who Would Win?”!

This hardcover is a joy for Usagi fans – whether they’ve just begun their journey or they’ve stood alongside the rabbit ronin for a long time.

Ian’s taken to looking at the comic book form lately. He’s also been watching the Mets a lot more recently. Watch him melt down on Twitter @IanGonzales.

Videogames vs. the World: eXistenZ