Of all the Before Watchmen books, I had the most hope for Nite Owl. He’s similar to Batman in that he has tons of money and a lot of tech. He’s a skilled martial artist, and he has a pretty imposing costume. What J. Michael Straczynski does here, however, is rehash the origin of Tim Drake and bring readers the closest they’ll ever be to a Nite Owl/Rorschach buddy comedy.

Nite Owl has some interesting moments. While young Dan Dreiberg’s detective work was similar to Tim Drake’s in the “A Lonely Place of Dying” storyline – where Drake figures out the identities of both Batman and Nightwing – Dreiberg is given a bit of a sordid backstory that makes his connection to Hollis Mason more genuine. And the training bits between Mason and Dreiberg are fun to read. 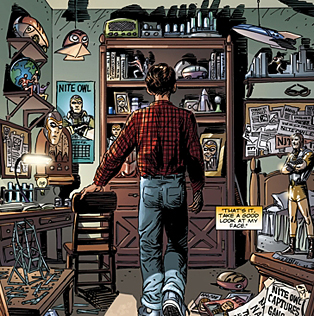 But when the comic jumps ahead to the Nite Owl/Rorschach team-up mentioned in the first meeting of the Crimebusters (as seen in Watchmen #2), the story loses its traction. I say that because there are mentions of the strong history between Rorschach and Nite Owl. Dan Dreiberg is the first person Rorschach visits after he leaves Eddie Blake’s apartment in Watchmen #1, and he mentions their crime-fighting days several times throughout the entire 12-issue Watchmen series. But in Nite Owl, this shared history occurs on one page, shown through a faded montage. I would have liked to have seen the story try to establish itself before moving so quickly into the direct connection to Watchmen.

Tonally, the conversations between Nite Owl and Rorschach also read differently than they appear in Watchmen. Granted, this occurs before the Blair Roche kidnapping case that changed Walter Kovacs forever, so he’s not emotionally destroyed yet. But Straczynski’s Rorschach is a different character. In Watchmen, Rorschach speaks in full sentences until he finds Blaire Roche’s kidnapper. Here, he talks in fractured phrases, which conflicts with the timeline established in Watchmen. Also, JMS throws around Rorschach’s trademark “Hurm” as many times as Alan Moore did in the entire Watchmen run (I counted).

The art is also a visual distraction. I like Andy Kubert’s pencils, but I think Joe Kubert’s inks really muddy up the visuals. Whereas Sandra Hope’s inks were thin and smooth in Flashpoint, Joe Kubert’s inks are thick and erratic. The images have the trademark Kubert style, but they alter characters’ faces and add copious shadowing.

I think JMS would have been wise to stay in one time frame, like the 1960s, and tell the early days of Nite Owl before Watchmen occurred. The need to establish the character is evident, as JMS wants to put his own stamp on the Watchmen mythos. But he ignores some cardinal boundaries set by Alan Moore and Dave Gibbons and for that, Nite Owl suffers greatly. 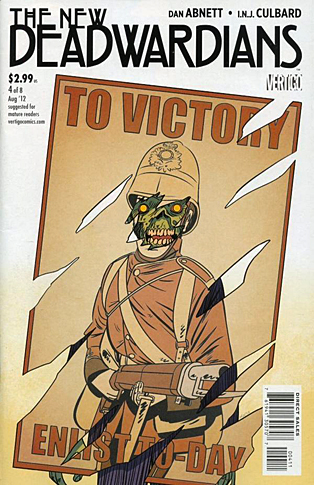 Dan Abnett peels away one more layer of his murder mystery in The New Deadwardians. The world he’s teased is revealed a bit more each issue, and it appears readers are going to get a better look at the area outside of London. Plus, with some great character moments, Abnett reveals more of his main character – the sad but collected George Suttle.

When we left Chief Inspector George Suttle last issue, he was about to be attacked. Dan Abnett picks up this conflict immediately and shows readers a side of Suttle that was present but not explored. The effect is that Suttle appears to be a more dangerous person than his calm and composed demeanor lets on. There’s also an interesting character moment between George and the prostitute Sapphire. It’s clear that there’s a connection between them, but the fact that Suttle, as a vampire, has lost the ability to long for anything makes their tenuous connection that much more charged.

I.N.J. Culbard’s smooth art is a great selling piece for the story. As much of the world is vague, Culbard drops background detail to help readers focus directly on character, especially considering the amount of dialogue that occurs in this book. And Culbard knows when to use close-ups to create tension, and the few times in the book when he needs to, the effect is lucid.

The New Deadwardians keeps adding depth to its story, making it a consistently engaging read. As the story moves outside of the established world into Zone-D (the Dead Zone), readers are finally learning more about the world and how it came to be. The characters are also becoming bigger players, and Abnett’s writing focuses heavily on laying the plot threads for future conflicts. And what’s really interesting is that the murder that started the series is probably the least impressive part so far. 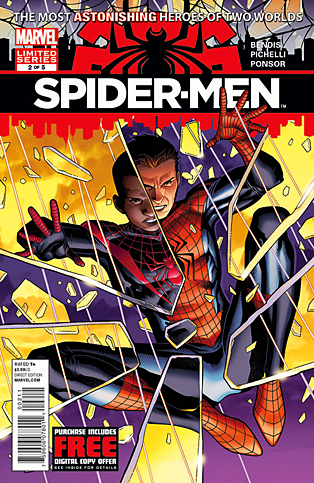 Bannen’s Book of the Week: After having his heroes meet at the end of the previous issue of Spider-Men, Brian Michael Bendis gives readers the fight they’ve wanted to see as Peter Parker, the original, squares off against the new Ultimate Spider-Man, Miles Morales. The results are funny and surprising, and Bendis is able to tell another great Spider-Man story chock-full of humor and action.

Bendis knows how to write Spider-Man. Each character keeps the tone of the issue light, and Bendis is able to convey both the wit of Peter Parker and the naiveté of Miles Morales. I also found myself as frustrated as Peter when he can’t get the answers he needs (like how everyone knows his true identity), but Bendis solves this by using Nick Fury, his most powerful character, to set all records straight and by the end of the issue, it’s clear the time for exposition is over.

I think my favorite part of the issue, however, is the 22-line dialogue bubble where Peter explains his perception of things to the Ultimate Nick Fury. The comic is word-light and action-heavy, and at that point, I thought the dialogue would bring the pacing to a standstill. But it’s a clever move on Bendis’ part, because he doesn’t muddy up the rest of the issue with such word-heavy bubbles, and the explanation is necessary so readers know that Parker is up to speed on his predicament.

Sara Pichelli’s art is, in a word, gorgeous. She renders the characters with such detail that the images come alive. She fluidly depicts movement, and given that her two main characters are acrobatic by nature, Pichelli goes to lengths to make them lithe and agile. Justin Ponsor also adds life to the imagery with his vibrant colors. He can make Miles Morales’ black costume shine and Peter Parker’s traditional red and blues look flashy. I have nothing but love for the artists of this book.

I was unsure about whether or not Bendis would be able to make this story work, given that Marvel has been very clear about keeping the 616 and Ultimate universes separate. But I would be lying if I didn’t admit that I love seeing these two together.