The week after E3 2011 must have been insufferable for everyone I knew back home. There I was, at the bar, at a D&D game, at a coffee shop, at the taco truck, going on about the just-announced Wii U – and I didn’t make a damn bit of sense.

Like a cross between a mime and a yoga instructor, I’d stretch and gesture as if I were holding the Wii U’s gamepad, then describe demos like this one: figuring out a pirate ship’s pattern of fired cannonballs to the beat of the music, while aiming the gamepad around to find the fire through a separate screen, held in relation to my TV. Someone at Nintendo thought that was an amazing proof of concept before the world had a clue about Wii U. Rhythmic AR pirate-battle gesturing? God bless those nincompoops.

I walked away with the feeling that the Wii U now sports the best FPS controller ever made for a console.

One year later, Nintendo has taken a lot of flak for its E3 2012 press conference—dry banter, third parties this, huge games that and so on. But they deserve credit for finally making the Wii U make sense. Really, for making the conversation about it as delightful as playing it.

This was me at a bar last night, talking to a buddy who knows diddly about videogames but whose son is obsessed with virtual Tony Hawk fare.

Me: I got to play with the Wii U last week.

Buddy: Wii U? What’s that about?

Me: Okay, so, it has a controller that’s just like the Xbox: same joysticks, buttons and triggers.

A look of acknowledgment, of comfort. As it turns out, the idea of 50 million buttons on a controller eases my friend – as long as they’re like the ones he’s seen before.

Me: But between all those buttons is a 6.5” touch-screen.

An eyebrow raise. Now that could be interesting, but you need to sell me, his eyes tell me.

Me: And the controller has all kinds of motion sensors, too. The best example is ZombiU, and it makes the Wii U Gamepad feel like an apocalypse survival kit. I’ve used this sentence 800 times, but it’s still golden. My buddy is attentive, his body language warming up.

Me: You’re in a first-person view with a gun, taking on zombies, but instead of pausing to look at a map, you can look down at that second screen at any time.

Buddy: Oh, nice! He doesn’t play with a fucking DS. This shit is new to him.

Me: You can also check, like, your inventory on there and other things, tapping the screen to select weapons and items on the fly. But all the while, the game isn’t paused, so you have to be mindful of zombies attacking you at any moment on your TV.

He’s nodding. What could be a cumbersome thing, to manage two screens at once, has survival-horror context now.

Me: Now, at one point, you get a sniper rifle, and the game tells you to hold the Wii U gamepad up. At that point, the controller screen becomes a fucking sniper scope. You can look at the TV screen to see the full field of view, then fine-tune your aim by moving the Wii U in the air. I gesture with slight up-down, side-to-side motions as if I’m holding this thing.

Me: At another point, I have to break into a door by doing a little puzzle on the touch-screen, right? Only, the thing is, I can see zombies coming up to me on the TV screen while I’m solving this puzzle, so I’m freaking out.

He has the same flash I did when I played the puzzle – that feeling that the game makes you feel like you’re in a goddamned zombie film, that brilliant sort of “I can see my demise slowly approaching” feeling that dangles fear, then yanks it away upon success. He’s smiling.

There’s more to ZombiU than that; for one, the Metroid Prime-esque scanning of the game world works really nicely with the same periscope-style aiming and, for another, the most terrifying part of the ZombiU demo came when the GamePad’s special features stopped working; the touch-screen turned to static, and I was alone in a basement. And that’s good, that I could sell my friend on the game without having to spoil its every little bit, because Ubisoft faces the same challenge – they still have to craft a full, engaging game that rises beyond an incredible 15-minute demonstration. 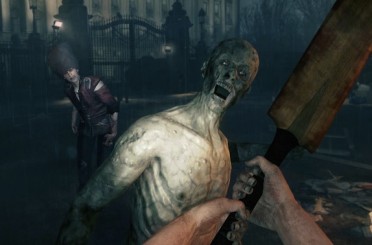 At the very least, I walked away – or, I should say, I was kicked out for going over my time limit – with the feeling that the Wii U now sports the best FPS controller ever made for a console. Nintendo would’ve been geniuses to have someone get on that E3 stage and say so; sadly, they were more worked up about the system’s multiplayer possibilities. I don’t blame ’em; most of my other favorite experiences were the one-on-three games, where the guy with the Wii U Gamepad sees something different than the players watching the HDTV.

Thing is, the last time Nintendo came out of the gate with a new-console concept, they also sucked up all of the good ideas in the first month, and the combination of NintendoLand and the Wii U Wario minigame collection seem poised to do so again. There are only so many ways you can reimagine Pac-Man Vs. before the concept collects dust next to our copies of Wii Sports.

This year, it’s ZombiU that does the real grunt work by saying, “Instead of a gimmick, we have been given legitimate tools. This controller is meant for video games. Let’s make some.”

ZombiU is expected to be a WiiU launch title.  Sam also enjoyed The Last Of Us, Dishonored, Metal Gear Revengeance and Halo 4.