Batman had a rough year in 1993. After years of chasing down villains like Joker, Catwoman, Poison Ivy and Two Face, Batman was beginning to suffer from exhaustion. Suddenly, a steroid-enhanced South American muscleman shows up in Gotham City and blames Batman for some nightmares he had as a kid. So, he decides to break all the inmates out of Arkham Asylum and drive Batman to the brink of physical and mental shutdown. Oh, Batman and Robin were also training a religious zealot who’d been brainwashed by ultra-secret knights descended from the Crusades. 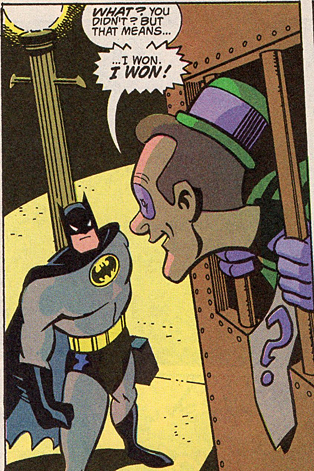 I was 13 and even then, I knew the score – this was some bullshit Batman.

In 1993, the Paul Dini and Bruce Timm-helmed Batman: The Animated Series and its comic book tie-in series, The Batman Adventures, were continuing the work that garnered them the much-deserved success and accolades they received when they premiered in 1992. The Batman Adventures followed the same format as the television series. Each issue was a standalone story (aside from the occasional two-parter) in which Batman would face off against one of his foes. The art in the book mirrored the cartoon’s style. As Batman: TAS became The Adventures of Batman & Robin and later The New Batman Adventures, the comic continued as Batman & Robin Adventures and Batman: Gotham Adventures, respectively. Basically, there was a tie-in comic with brand-new stories that ran for the entirety of the cartoon’s run, and beyond.

While the mainstream continuity Batman comics of 1993 featured an extreme Batman in the form of brainwashed religious zealot Azrael and gritty villains like Gunhawk (DUMB!) and Abattoir (a wasted opportunity), The Batman Adventures focused on classic villains (and classically-themed villains like Harley Quinn). The creators focused on telling a complete and compelling story in 22 pages. Talents like Kelley Puckett, Mike Parobeck, Ty Templeton, Rick Burchett and more translated the formula of Batman: The Animated Series flawlessly.

The villains in both the best episodes of the cartoon and best issues of the comic represented the other side of Batman and his supporting cast. In Batman Adventures #10, Kelley Puckett and Mike Parobeck boil the Riddler down to what makes him great – an egomaniac bent on outsmarting Batman. The issue focuses on Edward Nygma, fresh out of jail and planning to retire from crime. Batman’s outsmarted him too much, so it’s time to find something else. Nygma’s dimwitted yet well-meaning gang talks the Riddler into trying one last caper – a last chance to outsmart Batman. What follows is a tale entitled “The Last Riddler Story.” The Riddler plots his crime while Batman is busy trying to stop a trio of criminals – Mastermind, Mr. Nice and The Perfesser. The Riddler is no physical match for Batman, so he uses subterfuge to mentally blindside him. The thrill of the issue is not Batman pummeling Mastermind, Mr. Nice and The Perfesser’s goons, but the fact that Riddler pulls it off! It’s one of the best Riddler stories in comics.

Batman & Robin Adventures #10 perfectly distills both Ra’s al Ghul and his daughter, Talia. In the story titled “The Blood of the Demon,” Ra’s attempts to release the deadly Teli’Aroa virus on Gotham and the world. Yup, Ty Templeton and Rick Burchett told (what was essentially) the same story as multi-part Bat-events Contagion and Legacy in one 22-page comic. 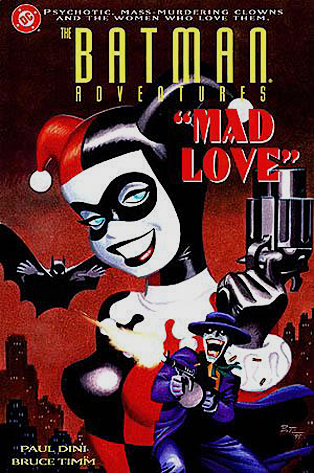 At one point, Ra’s says, “The earliest case of this disease you call a horror was recorded in the 14th century. The natives called it Teli’Aroa… ‘The Blood of the Demon.’ Half a world away, yet in the very year of my birth.” The line is quintessential Ra’s al Ghul. The characterization of Talia is spot-on, too. She’s torn between her loyalty to her father and her beloved Batman. Batman and Robin go on a globetrotting race against the clock to stop Ra’s plan. The issue is a pitch-perfect distillation of the Batman/Ra’s/Talia relationship – it’s one of my all-time favorite Ra’s stories.

What may be Batman: The Animated Series’ most lasting impact on the Batman mythos is Harley Quinn. Paul Dini and Bruce Timm created Harley as a female sidekick for Joker. She first appeared in the episode “Joker’s Favor,” and quickly became a standout character on the show. Her origin story, however, was rejected by the censors at Fox. It was probably too risqué for the same network that aired Married… with Children and The Simpsons, but Dini and Timm found a way to tell the story. After making her first comic book appearance in Batman Adventures #12, Harley’s origin was portrayed in the 1994 one-shot, Batman Adventures: Mad Love. Written by Paul Dini and drawn by Bruce Timm, Mad Love probes the relationship between Harley and the Joker, starting with Harley’s time as an intern at Arkham Asylum, and covers how Dr. Harleen Quinzel transformed into the apple of her puddin’s eye, Harley Quinn. The story has found its way into print in various trade paperback and hardcover collections over the years and is still hailed as one of the best Batman comics ever produced.

Ian can’t stop buying and reading Batman Adventures comics. He will tweet about them like crazy via @IanGonzales.