I wasn’t bullied much as a kid. Sure, I was your typical, average-looking nerd – bespectacled, gangly, pale skin with some splashes of acne – but I was generally easygoing, funny and skilled enough at hiding my geekiness to get the masses to spare me their wrath.

Because I was always aware of that ever-present possibility for embarrassment, though, I tended to keep to myself. If that paralyzing conglomeration known as “Other People” ever knew that I once beat the first island of GTA 3 in a day, that I used to listen to Final Fantasy soundtracks to ease my mind or that I had spent more time collecting Pokémon than most boys spent chasing girls, I figured I would be effectively committing social suicide.

I was different. So – undeserved or not – I felt vulnerable, and I knew it. I didn’t care all that much for these other people or their interests. Yet, in many ways, I felt like they unknowingly held my livelihood in their hands.

I’m older now, and I’ve been happily along for the ride as my beloved games have grown with me. These days, I often think I’ve outgrown my occasional social paranoia, but every now and then a good online gaming session serves to put my insecurities back where they call home.

As a kid already struggling with confidence issues, I would’ve been wary going anywhere near a modern online lobby – the thought of putting my skills on display for complete strangers was a rather daunting prospect, to say the least. Anonymity tends to breed asshats, and it only takes one such asshat to turn what’s supposed to be a session of communal enjoyment into one of coldly singular shame. I’m a big boy now, though, so I always figured I could handle it.

Then a 10-year-old told me I should kill myself over Xbox Live.

The game, in the surprise of all surprises, was Call of Duty (Black Ops to be exact), a title whose community notoriously contains its fair share of casual racists, misogynists and other such morons. This isn’t meant to be a slight against Activision, by the way; dickheads have a tendency to show up to any social gathering. I expect, and often receive, aimless insults when I play online, often for no other reason other than the fact that I’m just there. I’m not naïve enough to think I’m alone in this, so I try not to take it too seriously.

However, this kid – who later admitted his age to me after his assault – was the first to ever launch something like a death threat in my direction. Since I don’t remember the whole of his gamertag, but do distinctly recall the word “poop” being involved, I’ll call the youngster “Little Shit.”

Like most shitstorms, things started out unspectacularly enough. Our game of Domination went along, with Little Shit mumbling angrily under his breath after any particularly offensive death. “Fuck!” he would yell after ending up on the wrong end of a bullet spray. “Goddammit,” he grunted after blowing a kill opportunity. I don’t think he was having the best of days.

As far as my play was concerned, I wasn’t having the best of days either. Poor aim, bad decision making, lost one-on-one battles and other such fails were plaguing me this particular game. I was doing terribly, and naturally my old childlike nerves were starting to rile up from the bottom of my guts again. Somebody’s going to call me out, I thought, as we continued to get pummeled, as I continued to get my ass handed to me by uniformly bland, digital avatars.

Please don’t call me out.

“Dude, you fucking suck.” Blunt and to the point, sure, but it still wasn’t too shocking at this point. I’d heard worse.

I sighed. This was the kind of moment 10-year-old me would’ve lost sleep over, the kind that would’ve reinforced my decision to hide my geekiness as a kid, the kind that, unknowingly or not, grabbed hold of my insecurities, foolish as they may be, and wrung the life out of them.

Those days were supposed to be over, though. Yes, Little Shit was just a little shit, some random boy probably upset because Mom wasn’t making mac and cheese that night. But, just maybe he was the kind of kid who made other little boys, the ones like me all those years ago, afraid to be themselves during some of the most crucial years of their personal development.

Suddenly, I felt like I had to say something. I had to calm Little Shit down, at least for 10-year-old me’s sake. This awkwardly noble crusade felt like something out of an episode of Seinfeld, updated for geeks of the 21st century. I was like the nerdy George Costanza, and this was to be my “beached whale” moment. This was to be for all those boys everywhere who unfairly think they’re losers, for all those kids who will grow up feeling abnormal. This was going to be for me.

Unfortunately, all this grand thought eventually led to me meekly quipping, “Hey, take it easy, kid.” Not the most heroic rebuttal, I know, but at least I had said something. Little Shit knew I was listening now, and he knew I was older than him, so he certainly would know to hold his tongue and keep his miniature rage to himself, right?

“Dude, you sound like a fag, and you suck,” he replied, rather nonchalantly.

“You should just go kill yourself, fucking loser.” 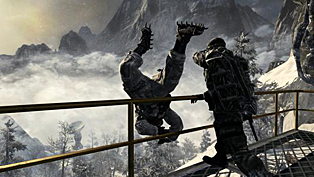 I took my headset off and decided to quit the game. For one, I figured there was no point in arguing with him any longer. How could I? There was always going to be an infestation of little shits burrowing themselves in online games, blindly raging and cursing while their parents are in the other room. If I, by some miracle, got my Little Shit to recognize how ridiculous he was being, there would be someone else just like him ready to take his place in another lobby.

He was just a kid, after all – one presumably raised donning a headset and holding a wireless controller. He probably spent night after night at the virtual gun range, working out his still-developing aggression through headshots and careless insults. As he played his game, he was being trained to become a full-grown ignoramus, one who will treat Call of Duty and games of its ilk as a perpetual dick-measuring contest, where his machismo will always need to be proved.

Then I thought of what he had said. I thought of how, in that one, brainless moment, he had brought me back to my childhood faster than any Pokémon rerun ever could. I thought of how I do kind of sound funny, how I hold onto my “ess” sounds a little too long sometimes and create a bit of a light lisp when I talk. I thought about how much time I put into these games and more often than not still had no consistent skill to show from it.

Little Shit made me think about how, despite having plenty of great friends, a loving girlfriend and a supportive family, I would still always have that awkward loner of a little kid as part of my fundamental person. Even if Little Shit had no sense of depth to his statement, he had made me think about him, and how he related to me, much more than I reasonably should have. I thought of the absurdity of the situation, how a random, spiteful child was making me consider my own being. I felt hopeless.

I thought about the potential repercussions, of how pathetic everything involved in this session was. Little Shit was becoming like my little Camus, plunging me into a pool of existentialist thought and forcing me to wonder why I spent so much time practicing my favorite hobby. Why did I devote so much of my love to pixels, love that had, to a small extent, taken away from my potential love for flesh? Why did it feel right to revel in games and geekiness instead of assimilating to the accepted norms? It all felt like a heavy load to bear.

Of course, now I realize how nonsensical much of this internal debate was. I’m aware that I made a mountain out of a molehill, where my projected insecurities elevated some anonymous future douche into something much more than he’s worth. He was just a little shit to me – nothing more, nothing less.

Even still, his kind lurks. They meander all over not just Xbox Live, but virtually all forms of online gaming. They’re not the majority, not by a long shot, but they’re out there, spouting off angered nonsense at every missed grenade throw. Unfortunately, they’re held as commonplace. If you happen to run into one of these little morons and you feel defenseless to their idiotic assault, let me advise a rather easy way to combat them: Hit the mute button, enjoy the game you love and, more than anything else, try not to think too much about them. Hopefully, they’ll grow up soon enough.

Things are Getting a Bit Unreal