James Gamble’s SpikeDislike is not much without its scoring system.

The goal is to get a bouncing ball (or cat, or square, or rainbow, or sheep) over and under an endless series of spikes (or UFOs, or ghosts, or unicorns, or fences). The ball bounces up and down automatically, while pressing the screen makes it move forward. To play Spike Dislike is to carefully time presses with the bounces to maneuver around the unlikeable spikes.

It’s fairly basic stuff, and if the goal was simply to get as far as possible, there wouldn’t be much to it. You could take your time with each spike, waiting until the perfect moment to clear it.

The very same scoring system promotes recklessness and haste. You begin to play less calmly, more frantically. Once you understand how the scoring works, you find yourself dying where before you had no trouble. You can’t stop; you have to keep moving or your combo will be over.  As your combo increases, the ‘beeps’ get more and more high-pitched like a rising heart rate, only to drop back to a low, disappointing sound and a lowly ‘1 point’ if you let your combo end. You’d rather die than have your combo end. 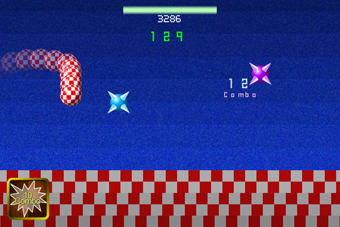 That isn’t the most clever, most sinister thing about SpikeDislike’s scoring and what it makes you do. There are also ‘super’ combos for passing multiple spikes in a single, prolonged press, rushing your ball at full speed over and under spikes. It requires you to look ahead, map out your trajectory a fraction of a second before your ball gets there, and make the all-important gamble: if you let go now, you will definitely survive; if you hold on for a bit longer you might bag 500 points, or you might hit that blue spike.

Sooner or later, super combos will kill you.

It’s simple, elegant and evil. Nothing is stopping you from going slowly and steadily, but there’s always the knowledge, pestering at the back of your brain, that you will get even more points if you go faster, more recklessly. It brings out the worst of you. It forces you to admit that you are greedy and that you want the points now, damn it, not in five minutes. At least, it forced me to admit this.

It’s easy to feel like SpikeDislike dislikes you. Like each death is unfair and uncalled-for. Like it told you to do something that got you in trouble. But, really, that’s not the truth. SpikeDislike might have egged you on with its beeping and its combos and its trophies for particularly daring moves, but you were the one that rushed; you made the stupid mistake. You only have yourself to blame.

Rookie of the Year: Raiders of the Lost Wii

No One Takes Notes Anymore