For people who played videogames in the 1980s and 1990s, reading the manual of a newly-purchased game was just as important an experience as actually playing the game. Players would devour every piece of information the document offered, eating it up in anticipation of the actual gaming experience. This might be the only game they would play that year. They took all of it in.

Manuals barely exist now, having been shrunk down to the barest minimum over the years. There are other, similar gaming experiences that have faded away, but one has staged a curious comeback in the past few weeks.

The idea of taking notes for a game in this development generation is almost preposterous. Why bother? Most gaming experiences are so fluid, finding the solution to a problem is never that hard. Maps are provided in tremendous detail, characters explain their motivation and backstory to you on demand. There’s no reason to write down any of this information when you can come back to it at any time. Moreover, there simply aren’t many challenges that require you to visually sort them out on paper.

Where have all the note-takers gone?

It’s such a far cry from the current world of gaming that it’s almost impossible to comprehend for people who didn’t experience the need for note-taking firsthand. Games like Secret of Mana or Legend of Zelda relied so heavily on taking down notes to solve puzzles and other riddles that it was an intrinsic part of the experience. To have aspects of games jumping off the screen and onto the page made those games more tangible. Just as we create narratives for ourselves within games, taking notes creates an entirely new experience as well.

It wouldn’t be unusual for some gamers to have entire notebooks filled with passwords, maps and solutions for hundreds of games.

No one takes notes anymore, but the launch of Fez has prompted many players to rethink that credo. The game visually taps into a collective nostalgia for the eight-bit era, but it has also managed to prompt gamers to emulate the same experiences they had with these old games – like taking notes. Without any prompting, Fez players have started creating entire blogs dedicated to the notes they used when solving the game’s puzzles. Codes and riddles are littered throughout the game, begging for translation. They require time and patience – and gamers have returned to those forgotten habits in order to solve them.

The fact that this is a novelty indicates just how long note-taking has been dormant. Where have all the note-takers gone?

The rise of the Internet surely claimed some; patience is a virtue long gone when you have YouTube playthrough guides. But there is a larger issue here – the abandonment of complexity.

Aside of game lore, the primary purpose of a game manual was to tell players what to do and how to play. As in-game tutorials evolved, however, the experience became more interactive and the need for a printed manual diminished. Take a look at a manual for a blockbuster like Call of 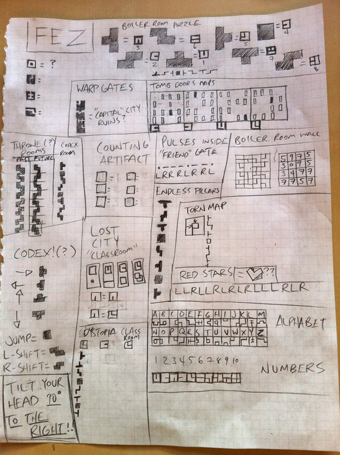 Duty 4: Modern Warfare. In the 1990s, it would have included a huge manual, detailing maps of different levels, details of ordnance and descriptions of tactics. Now, it’s a few sheets of paper warning you not to have a seizure.

As games have become more technically complex, they have become simpler to play. The old-style save systems, where long strings of codes were needed to skip back to a level, became obsolete with the introduction of cheap rewritable memory. The physical aspects of gaming – big boxes filled with discs and maps and guidebooks – diminished as it became possible to include that extra material within the confines of the game.

The last time I had to take notes for a game before Fez was in Splinter Cell: Double Agent. You’re given the task of solving a mathematical puzzle, putting numbers on a cube without repeating any numbers on the opposite side. It’s extremely difficult and it was a rare moment when the means for solving the puzzle weren’t available within the confines of the game. Eventually, I had to reconstruct the entire box in paper form just to finish it. It was an odd experience, but triggered plenty of memories from my early gaming days when this wasn’t just a novelty. It was a necessity.

Games are no longer complex. The puzzles in Portal may take a mental effort to finish, but the solutions are often simple. Dark Souls may be a punishingly difficult, but it’s not necessarily complex – you navigate the world and try not to die. Complexity is handling many different factors all at once – a juggling act of thought and skill. Fez is littered with complexity, including its own hieroglyphic language offering clues and hints to unlock new secrets and hidden treasures.

Most of the time, puzzles aren’t complicated enough to require serious dedication. And in other instances, they’re literally given to you. In Uncharted 3: Drake’s Deception, Nathan Drake is given the task of walking over a large floor of tiles in a particular order to unlock a secret door. If you make one wrong move, the entire sequence is ruined and you have to start over. But not only does the game provide you with sound cues as to whether you’re doing everything right, it literally gives you the answer – in a notebook, no less. You flip through the pages and find your answer. The game has done all the work for you.

Imagine if the game had given you no clues, if all you could do was just spend hours figuring out the solution. What would players do? They’d have to write it down.

Fez has littered its world with a stamp of authorship that requires a dedication to the game itself, not just a passive experience. It’s not a ride. It’s a conversation. The resurgence in note-taking in support of that conversation reveals something lamentable – a regrettable decline in artistic vision and complexity. It’s time we were given a challenge.