Sam Humphries begins and ends his issue by dropping his characters – and his readers – into alternate worlds that have no grounding in our reality. Yet, despite how easily the settings shift, Higher Earth manages to tell a clear and clever story while still introducing a concept that requires an open mind and an appreciation of science fiction. 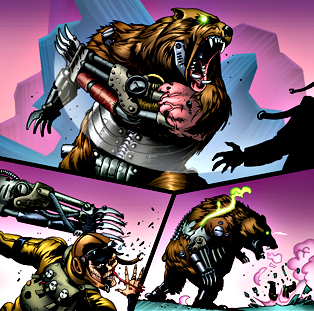 What impressed me most about Higher Earth is how Sam Humphries, in two pages, explains the entire concept of the series. Parallel earths exist and our hero can travel between them. But he sells the concept in a matter of panels. The opening scene – where the main character falls from the sky – sets the tone of the comic. We’re dropped into a world and much like the female character Heidi, we’re given almost no information. Yet just like her, we buy the concept and follow the lead hero into another dimension.

Humphries does a great job of making Heidi an instantly relatable character, even if her naiveté is a bit blunt. For example, she’s drawn playing with action figures. Humphries wants to emphasize her innocence, but the moment makes her more childish than I’d expect for such a tough lead (she’s very handy with a sword.) Nevertheless, she’s the anchor to which readers are drawn.

Francesco Biagini’s imagery is a bit cartoonish, but his detail is impressive. Because the story opens on a garbage planet, Biagini has a lot of rubbish to illustrate. Backgrounds are layered with trash imagery and while the character designs can be a bit blocky and asymmetrical, the art is never a distraction. When I look at Biagini’s work, I think of Ed McGuinness (who can be an acquired taste), and while Andrew Crossley keeps the color palette pretty even, there’s plenty to look at and enjoy.

I like the concept of Higher Earth, and I like the confidence with which Sam Humphries presents it. Readers can either accept it or drop the book. Given the nature of the storytelling, however, and the well-developed characters, I’d recommend Higher Earth as a book that should be on your pull list.

For a while, at least. 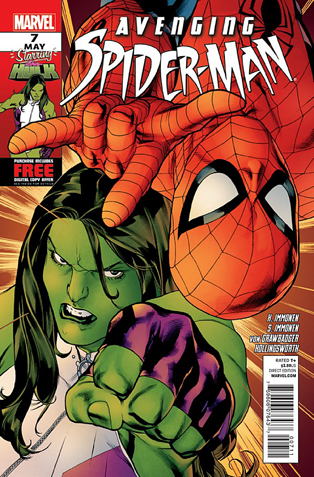 When Zeb Wells stepped away from Avenging Spider-Man, I have to admit that I was a bit skeptical as to whether or not the series would be as good. Wells writes Spider-Man as an hilarious lead, and I’ve loved all the art so far. Seeing as how Stuart Immonen is one of my favorite illustrators, I was sure I’d like the look of the comic. But I was skeptical of the story. Is She-Hulk interesting enough to be paired with Spider-Man and is Kathryn Immonen good enough to make the comic worth reading? Turns out, the answer is yes – and Kathryn Immonen is a talented storyteller to boot.

The comic is mostly absurdity from the get-go. Kathryn Immonen keeps the tone lighthearted and the story moving. Spider-Man comes off as a bit of a loser, but he’s a lovable loser at that. And the comic has plenty of laugh-out-loud moments. Because it deals with a catlike goddess coming to life (and a plethora of cats), silliness is the overall tone. And the image of Spider-Man wearing a bull’s head is awesome.

As for Kathryn Immonen’s other half, Stuart Immonen’s art is tonally perfect. His character designs are cleaner than they were during his Ultimate Spider-Man days and I credit that to Wade Von Grawbadger’s inks. There aren’t extraneous shadows, and many of the characters are smooth and thinly outlined. The action is well-depicted, and the colors are superb. Even though much of the comic is darkened, when light does appear, Matt Hollingsworth makes the images come alive.

But what’s even more impressive is Joe Caramagna’s lettering. Many panels are packed with dialogue, and several of these have so much occurring that Caramagna has to balance the words with the images and try not to overload the designs.

The whole issue is great. I’ve been super impressed with Avenging Spider-Man, because it’s a lighthearted book that captures the goofy side of Spider-Man while telling interesting – if a bit odd – stories. Avenging Spider-Man is one of my favorite series on shelves right now. It’s a clean break from the standard continuity and all it asks of readers is to take their heroes a little less seriously.

With writers and artists who understand the character, that’s an easy thing to do. 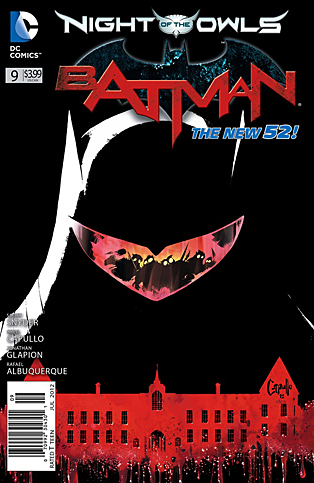 Bannen’s Book of the Week: Enough is enough! Batman has been beaten down and left for dead by the Court of Owls, so I wanted him to finally get some payback in this issue. He does, but it’s only the beginning. In an issue that references Frank Miller’s The Dark Knight Returns, Scott Snyder starts his own tale of revenge in a comic that is only one of many great issues to appear in this arc.

Given that the Court of Owls broke into Wayne Manor, I expected Bruce to fight back violently. After figuring out that the Owls can be defeated with cold air, he had Alfred lower the temperature of the Batcave so that his intruders would slowly lose their abilities, making them easier to defeat. But what works better is that Bruce knows they can regenerate, so he doesn’t hold back at all.

The satisfaction of seeing Batman toss his enemies around like rag dolls is more than I can describe. He dons a suit that references Batman’s in The Dark Knight Returns (when he fights Superman at the end of the issue). Here, however, Bruce uses brute strength to pound his enemies into submission, and while they still find ways to defeat him, the whole issue is dedicated to showing how they are fighting on Batman’s turf.

And he has plenty of tricks up his sleeve.

Whereas earlier issues had Bruce reeling – like those that took place in the den of the Owls – in this issue he’s confident and brutal. All of his smarts and gadgetry are on display. Having Alfred play a vital role is also key to showing that Bruce cannot defeat his enemies without some help from his friends. Even the giant T-Rex has a role in the story!

Given that the majority of the issue is action, Greg Capullo has a lot to illustrate. And despite how much occurs, Capullo manages to keep the story moving along at a fast pace. The comic is a quick but satisfying read, and I can’t help but notice how smoothly Capullo transitions between moments by overlapping panels, yet knowing when to let the moments settle. The imagery itself is always clean, even at its most detailed. Jonathan Glapion’s ink lines help illuminate the characters despite the dark imagery, and Capullo still finds a way to make Bruce look both desperate and powerful in the same moment.

This entire arc has been painful and exciting to read, and I can’t praise Scott Snyder enough for his work on Batman. I want Bruce to get vengeance, and judging by the final page, he’ll be allowed to let loose in the following issue. The comic is layered with detail, both in art and content, and Snyder keeps the story moving along without a single dull or wasted moment.

But “Night of the Owls” needs to end soon, because I don’t know how much more Bruce – or I – can take.

No One Takes Notes Anymore