Okay, so you’re running a game for your friends. They have their characters rolled and ready. You have your plot outline or module all set, and your enemies and monsters are ready to go. You start the game and you want the player characters to rush right to the haunted house or cave of dread, but they want to go to a bar first or pick up some weapons for the upcoming fight. They want to question the person who gave them this mission; they want to question that person’s sons and daughters – then probably his gardener, too. It’s their right to do so, as PCs live in a vibrant world of people and danger. The very essence of role-playing games is to become immersed within another world, to explore and interact with the people and creatures that live there, be they friend or foe, right? That means that you as a Game Master need to prepare for one more thing: non-player characters. You can’t have a world without people in it, and the PCs cannot be the entirety of your world. If they are, then you’re playing a much different game than I’d play.

[W]hen I’m making up NPCs on the spot, they end up sounding like Southern yokels

For my most recent game I had my PCs attend a dinner party. At first, it was just going to be a small affair, something different and more role-playing oriented, since we’d just spent dozens of sessions hacking through caves and dungeons. Once I decided that’s what I wanted to do, I needed to populate my dinner party with partygoers. I turned to the self-styled “front page of the Internet”, Reddit, for help. I asked my fellow redditors to supply me with character names and backstories, and in short order I had way more NPCs than I knew what to do with. The posters actually went above and beyond and along with character histories, they also gave me suggested connections between certain characters.

I weeded out the 30 best ones, did some rewriting, gender-swapping and formed even more connections with a few major plot points sprinkled in for good measure. What I basically had by the start of the game was a sandbox-style RPG session where role-playing became the most important aspect. It was up to the players to interpret the clues these NPCs were giving up – to notice the furtive glances between each character, the strange relationships, backstabbing and double-dealing that was bubbling just under the surface of these supposed men and women of nobility. I made sure that almost every character that was there needed something, and that there was also another character that could fulfill that need. I didn’t give the PCs any kind of mandate; they weren’t on a mission but were, in fact, between missions. I just told them that they were attending a party filled with nobles and knights; I left it completely up to them to mingle and to choose who to meet and associate with.

Here’s what I learned about building and running good NPCs: 1) Give them broad personalities. 2) Give them their own style. 3) Give them three sentences that sum up their backstory, tics or goals they have.

Give them broad personalities: I can be kind of an introvert in real life, which is one of the things that drew me to RPGs in the first place. It’s a time when I can slip out of my skin and be anyone I want. When I role-play, I’m not worried about looking foolish or being weird – it’s part of the game, and I’m certainly not alone while sitting there at a table surrounded by other people also pretending to be someone else. As a GM, I really enjoy slipping on these different characters from one scene to the next, and being prepared helps me to get “in character.” 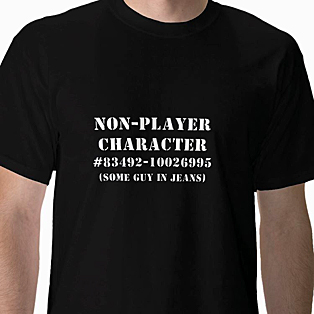 Having an NPC with a broad personality helps it even more, especially when it’s just his or her surface persona. That aloof and dismissive Duke? If you pay attention to him long enough, you’ll catch him making eyes at the Elven bard in the corner. The loud Baroness who is constantly attempting to get the other nobles to donate to her charitable causes? She’s secretly poisoning her husband. The elegant lady in the blue gown who has a penchant for gnomish gadgetry? She’s a vigilante by night, scouring the streets of villainy with weird weapons and skills. When you give your NPCs these broad and layered personalities, it gives you something to hook into while playing them. They will act one way, but they have a secret. That might inform upon certain actions they’ll take. In short, it makes them more like real people.

Give them their own style: The way someone dresses says a lot about who they are or who they’re trying to be. Someone who is overly concerned with how people perceive them is going to dress in the height of fashion. If they’re cultured it will be expensive, subtle and elegant. If they’re a criminal, they’ll be off-the rack, current but typical. If they’re more concerned with drinking and louting, all of their nice clothes will be stained by the time the second course arrives. Take a minute or two to describe what your NPCs are wearing. This will help your players distinguish who is who, when they’re all essentially you.

Give them three sentences describing their backstory: In the middle of a game, no GM wants to be shuffling through papers while their players are waiting to hear the answer to the question they just asked the half-orc paladin. Fleshing out your NPCs with paragraphs of information is great, but if that information can’t be easily accessed, then what’s the point? Three or four sentences to remind you of your NPC’s character and motivation are more than enough.

Now, I generally don’t do this kind of NPC prep in a regular game. This was an atypical session, because usually I’ll just have a name and a vague idea in my head about who an NPC is. I’m awful at playacting with accents, and I find that when I’m making up NPCs on the spot, they end up sounding like Southern yokels. When I put in the time to really develop some NPCs I found that playing them was much easier, and I was able to act them out with a nuance and confidence that didn’t exist previously.

In the end, my players had a blast, essentially being able to role-play through a murder-mysteryish improv night where one person (me) played pretty much everyone at the party. I learned a lot and had a good time as well. It’s a testament to the uniqueness of the RPG that a session like this can even be designed and initiated.

As always, I would love to hear from you all. Sound off in the comments. How do you prep NPCs for your games? Do you just wing it, do you extensively plan out the NPCs’ backstories or is it something in the middle?

Videogames are Killing Me