That’s not entirely true. Depression, bad eating habits, poor exercise and bad ergonomics are killing me. God, time and my own mortality are killing me. But videogames are, at the very least, an accomplice.

In 1999, my friend and mentor Tom Spurgeon wrote an essay called “Comics Made Me Fat.” It’s a funny piece that paints a picture of a life out of control, but Tom seems okay with it so you don’t come away from the story feeling too terrible. Twelve years later, Tom wrote another story that isn’t quite so jovial. In it he describes a health crisis that nearly killed him. Again, comics are all wrapped up in the sad story. When you live lives like us, writing about comics or games or whatever, it is really easy to fall into bad, even suicidal habits.

When I made exercise a requirement for playing the game, I just wound up playing less.

I will celebrate my 40th birthday this November. It is beginning to sink in that at this age, the near-death experiences of friends, family and loved ones come at an increased clip. Tom was a lucky forward scout that made it back alive. I’d rather not go out on the same mission, but if that’s the case I’d better start doing something about it.

Here’s what I’m up against: I’m overweight, pre-diabetic and my cholesterol is out of whack. I suffer from lower back pain caused by a hernia and I’m struggling with nasty headaches. The answer to nearly all of these issues is exercise. I need to exercise so I can burn more calories than I consume. I need to exercise to increase the good kind of cholesterol in my blood and lower my blood sugar. I need to exercise so that I build supportive muscle strength in my core and protect my back injury. Hell, even the headaches and the hard muscular knots in my neck would benefit from a little body movement. But that means I have to get off my ass.

I’m really good at coming up with excuses. Driving to the gym is a hassle. There are no sidewalks around my house so walking and bike riding is dangerous and/or iffy. Here’s a good one: I can’t do yoga because I haven’t swept the floor. The truth is that depression, fear and all kinds of dirty mental roadblocks are getting between me and doing what I have to do. That’s what people who don’t get the struggle with weight, food addiction and depression can never wrap their heads around. “Just stop eating so much,” they say. “Get off your ass and run a mile.” They’ll never understand the kind of headspace that drag 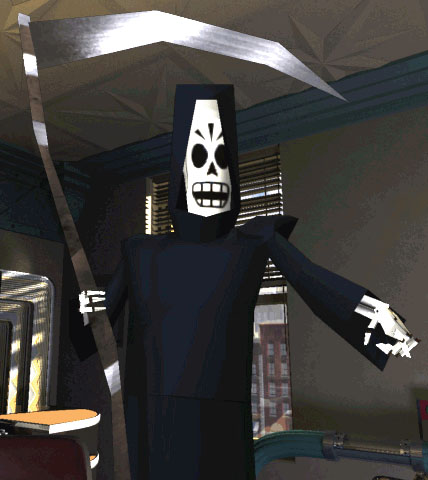 s people down like a rusty anchor chain. And they’ll never get how hard it is to shrug those heavy things off and do what needs to be done. The fact that it takes near-death experiences for many people to straighten up ought to be a clue that there are other, invisible and more insidious factors in play. They’ll never get it.

Part of my problem is that I let myself get derailed. I’ll make some good habits and frequent the gym for a month or two. And then something like E3 will come up and throw me off. I’ll come back exhausted and start the spiral again. For a while I tried to use videogames as a carrot, but my World of Warcraft workout was short-lived. When I made exercise a requirement for playing the game, I just wound up playing less. That was the path of least resistance. For a while I used Foursquare to kind of gamify gym attendance, but that didn’t work either. Some asshole named Pierre kept snaking me for the mayor prize. I was sure he was cheating somehow.

My latest scheme (or fantasy) was to get a treadmill and put it in the living room. I remembered reading that Neal Stephenson played Halo while he walked and kept thin that way. He even wrote a character into Reamde that did something similar. In the story the guy is a fantasy author who writes lore for MMOs – and he does all his work on a treadmill, keeping incredibly fit. So I’ve been harboring that idea for a while, but treadmills are expensive and a pain in the ass to get delivered and assembled. It’s an easy thing to put off.

That leaves me where I am right now: slouching in front of a computer with a mild headache swirling behind the backs of my eyes and taut strings of muscles stretching from the back of my head to my shoulder blades. The easiest thing to do when I’m done writing is to grab my iPad or Xbox controller and slump onto the couch with pillows propped so that it almost feels like my body isn’t even there. That’s how videogames are killing me. They’re the thing I’m doing instead of what I should be doing. That’s the most common charge levied at videogames and I don’t expect games will ever be able to shake that reputation. I doesn’t help when jerks like me write stuff like this about them.

Because truth is that it’s me that’s killing me. I’m just using videogames to help me get the job done.

Pretension +1 is a weekly column about life, games, culture and all the stuff that ties them together. Follow Gus Mastrapa on Twitter @Triphibian.