My cousin introduced me to The Authority during its first run from the late ’90s into the new millennium. I was struck by Bryan Hitch’s clean and detailed art, as well as the shocking amount of violence doled out by writer Warren Ellis. I didn’t follow the series after the creators left, but I remembered the name of the title when Mark Millar courted controversy by having Apollo kiss Midnighter. I watched the news wide-eyed, thinking, “They’re talking about a comic book!” DC recently brought Stormwatch back and, with it, the characters of Midnighter and Apollo. Their relationship has yet to materialize, but as a reader and a fan, I want to see it, and I want to see it done well. But homosexuality in comics seems to cause an uproar. What’s the big deal? Why do media outlets report on controversy found in comic books? In my view, there’s more to it than two men kissing.

When reading The Authority, I never felt like I was reading a comic about gay people but a comic about an action team that happened to have two gay members.

Stormwatch wasn’t always such a controversial comic. It began under Jim Lee when he worked for Wildstorm comics. Much like the Justice League, Stormwatch operated on a satellite overseeing the planet where they took care of various situations that arose. It wasn’t until Warren Ellis carried the characters into his series The Authority that the controversy began.

When Ellis finished his run, Mark Millar took over and pushed the Apollo/Midnighter relationship to the forefront. They weren’t written, however, as homosexual stereotypes. By that I mean they didn’t act as caricatures of gay men (think Jack from Will and Grace). Apollo and Midnighter had a great relationship. They were kind and loving, but strong and powerful. Their relationship had the same dimensions as Peter Parker and Mary Jane Watson’s or Clark Kent and Lois Lane’s. When reading The Authority, I never felt like I was reading a comic about gay people but a comic about an action team that happened to have two gay members.

Comic books have capitalized on the success of gay characters. Apollo and Midnighter were a copy of Superman and Batman, taking the old joke of them being romantically involved and putting it into practice. The Authority was praised for this decision, but it was praised more for its storytelling. DC has worked on introducing strong female leads who are also gay. Katherine “Katy” Kane is DC’s first gay superhero. Appearing in 52 #7, Batwoman created quite a stir. Gay rights groups applauded DC for taking such a bold step, but others derided them for either “pandering to the gay agenda,” or for creating a lesbian that was aimed at “male fantasies.”

More recently, Marvel has introduced the gay characters Hulkling and Wiccan in its Young Avengers title. Archie comics even opened its doors to homosexuality by introducing Kevin Keller, its first gay character, and having a gay marriage in Life with Archie #16. Despite a group called One Million Moms calling for a boycott, based on the fact that it is sold at Toys R Us stores, the comic sold out. And in the past few weeks, Marvel has been running solicitations about its own first gay wedding in June. Northstar, who currently appears in Astonishing X-Men, is going to marry his boyfriend Kyle in issue #151. 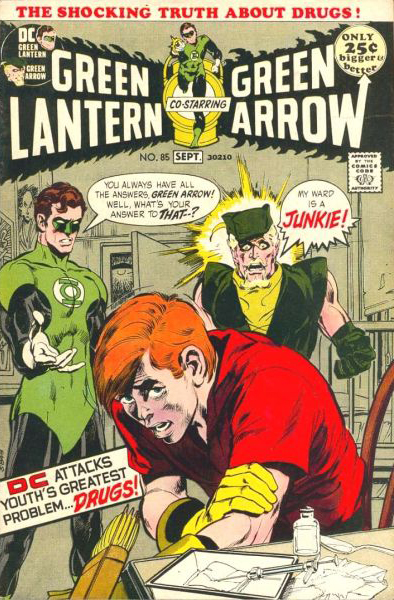 But comics have always been a place for social controversy. In Superman’s Girlfriend Lois Lane #106, Lois stepped into a machine that turned her African American. It caused readers – and Superman – to confront their own racism. Roy Harper, also known as Red Arrow, was addicted to heroin. His painful withdrawal and his rehabilitation were chronicled in Green Lantern #85-86. More recently in the Green Arrow series, Mia Dearden, also known as Speedy, was introduced as HIV positive due to her past as a prostitute. When she told the Teen Titans of her disease, they accepted her without any arguments.

So why do writers create the controversy? To sell comics? Probably. To create buzz over a title? Sure. But I think it’s more than that. I see comic book writers as experiencing and reacting to the outside world, offering a different view, and acting as a social barometer for changing times. The writers capture public sentiment and translate that into a mixture of words and images. Media outlets don’t go nuts about homosexuality in movies, books, or television. But when they appear in comic books, it is suddenly worth of a headline.

Why? I don’t know. Maybe it’s because comics are the last bridge between youth and adulthood and the majority of readers are children. Maybe people feel that exposing children to such controversy is unethical.

No other media form gets as much attention regarding controversial issues. Television and film are ephemeral – you can’t hold them in your hands. A book can be read and reread, but not in one sitting. A comic book, though…it is a story but also an artifact of our childhood. It reminds us of being a child, of the time when our thoughts on such issues were formed. It allows us, as adults, to look back on how our minds opened. We live in a world of great tolerance and maybe it’s because comic books paved the way for it.

Superheroes Should Never Fall in Love