Much like Peter Parker and his alter ego, Spider-Man, my love of comics is something that I can never permanently walk away from, even though I’ve tried multiple times. Since I started writing for Unwinnable, I’ve rediscovered my love for comic books – and what keeps me coming back. There’s just so much more to discover and journeys to be had with characters that have been there with me for many years.

Where does my journey begin? Sometime in 1985, I was at a stationery store in the Washington Township shopping plaza, probably after getting a haircut with my dad at the nearby Italian barber. My dad bought me Transformers #6 and all I can remember about it is that Megatron and Shockwave were blasting away at each other on the cover. Maybe the elaborate Cybertronian intrigue was too much for my 5-year-old brain, but I didn’t pick up any more issues after that, instead preferring my Transformers in cartoon form. In fact, I didn’t get another comic book until 1987.

It was G.I. Joe #64, where the current Cobra Commander is revealed to be an impostor. I ended up buying many more Joe comics after that – maybe it was because I loved the action figures, or maybe because the comic was much more badass than the cartoon, I really can’t say. Writer Larry Hama managed the almost impossible 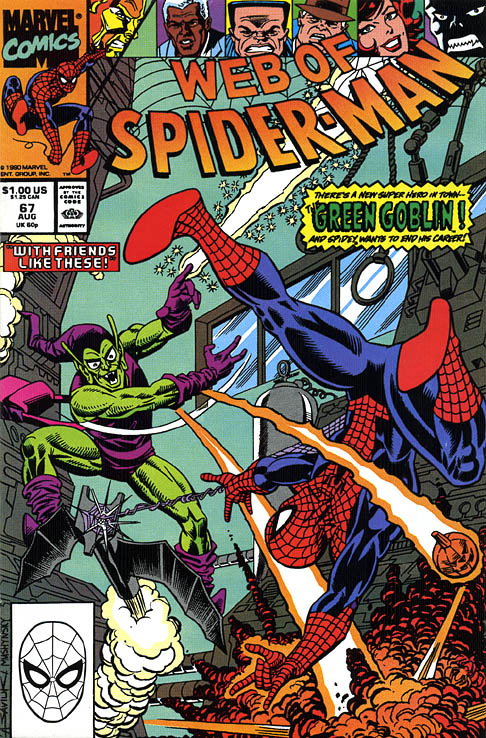 task of helming a series based on a toy line and actually made me care about many of the hundreds of characters. The story arcs were inventive, and even outlandish concepts like Serpentor and Battleforce 2000 were squeezed into the pseudo-realistic universe without seeming entirely idiotic. People also died, which seems like an odd thing to point out since the G.I. Joe franchise was about war, but about five people died over the entire run of the animated series!

For the next three years, I drifted through various comics, and elements of this period still remain in my collection. Some TMNT, a couple of movie adaption comics (Batman and Indiana Jones and the Last Crusade ), even the Alf comic series! Remember Alf? He’s back, in comics form. At this point, something began to draw me towards the superhero characters. Something that made me realize that I was riding a bike with training wheels and not getting the full richness of the Marvel and DC universes. Hulk, the X-Men, Spider-Man and Batman all looked like they were doing awesome things, and why the hell was I missing out? While I was testing the water with my toes before, in 1989, I was prepared to dive.

While visiting my grandmother in Tennessee, I bought Web of Spider-Man #67 at a nearby general store. Spider-Man briefly fights the Green Goblin before they decide to just hang out and talk for a while. It was a bit of a letdown from the battle promised on the cover. Still, the vastness of the Spider-Man universe was crackling in the dialogue and characters, and I wanted to learn more. Also, there was a tease that this villain Tombstone was way more powerful and was ready to take down Spidey in the next issue! I read this comic over and over. I was hooked. From then on, I collected as much Spider-Man as I could and even had a subscription to Amazing Spider-Man for years. More things were to follow, but where to go to next?

Continuity has always stood in my way of fully enjoying comics. The fact that most of these comics have been around for hundreds of issues was daunting. This was especially true when I didn’t have the disposable income to try out as many titles as I can now. I think that’s why I didn’t tackle the DC Universe at large until my early teens. I was also intrigued by the X-Men, but where was I going to jump in? Strangely my initial familiarity with them was with the horrible Nintendo game! At the time, the comic with the closest lineup to that game (Wolverine, Storm, Nightcrawler, etc) was Classic X-Men, which was a comic reprinting the classic story lines. It actually helped me finally jump into modern-day Uncanny X–Men and X-Factor. Not long after that, Marvel overhauled all the X-books so new people could jump on, so I guess I was just a little early to the party.

Much changed in the ‘90s. I must admit that my love and hatred of comics were both fully realized in those ten years. For about the last five of those years, I had pretty much quit buying new issues from Marvel and DC. Trade paperbacks were coming out more frequently and made collecting the classic stories easier. Image Comics was founded by the artists whose work was my introduction to many characters and it had my attention for a few years. Dark Horse Comics started putting out creator-owned comics like Hellboy and Sin City. Comic magazines were making me aware of stuff other than superhero comics, and of companies like Kitchen Sink and Fantagraphics. I also discovered comic books from other parts of the world and they were translated and available in America! While Marvel slumped with their Spider-Man Clone Saga and convoluted X-Men story lines, I was discovering the rest of what the comic world had to offer, away from the foil-embossed covers.

And then I pretty much stopped.

When I saw it, all I could think was, “Daredevil is written by Kevin Smith now?”

It goes without saying that the end of high school and the beginning of college is a crazy time. So many decisions and adjustments to make, and not enough time as there once was. I was too busy reading the books that teenagers read and watching the cool movies that aspiring filmmakers watch. And I played a lot of PlayStation. It would be a few years before something caught my eye on a wire comic book rack in a comic book store in New Paltz, New York. When I saw it, all I could think was, “Daredevil is written by Kevin Smith now?” I read it, liked it and checked up on some of my other favorite characters. I was hooked again.

I haven’t had a drought as bad as my late teens and early twenties since, although sometimes my passion dwindles to a couple of books a month. Other times I buy every stupid issue of that company-wide crossover. When I’m not buying Spider-Man, it’s nothing against the character, more towards his handlers and their handlers. The last 10 years of comic books has been wonderful and it’s an exciting, evolving medium that will probably get caught up in another stupid trend or two as this decade goes on, but I’ll forgive it. At this point I feel like I’m at an intersection between that period of discovery and that period of being caught up in a storyline of characters I love, a future classic.

I love to read engaging stories that will be stuck in my head for years to come from my favorite writers. I love simple dialogue exchanges between characters and the humorous – and sometimes absurd – places those exchanges and characters go to. I love seeing human stories told within this four-color format and I love seeing new worlds at the turn of the page. I love artistic innovation and being wowed by the new guy, but I also love the diverse artistic styles of my favorite artists.