There have been many deaths of girlfriends and loved ones over the years in comics, but none has caused such a stir as Alexandra DeWitt. A photographer for a newspaper in Los Angeles, Alex was the girlfriend of Green Lantern Kyle Rayner. One day, however, Kyle came home to find his girlfriend stuffed in a fridge by a guy named Major Force. This spawned the website, Women in Refrigerators, which dedicated itself to cataloging the often violent ends of the female lovers of superheroes. But there’s more to superhero love than dying, and sometimes a hero’s girlfriend turning up in a refrigerator is the best thing to happen. 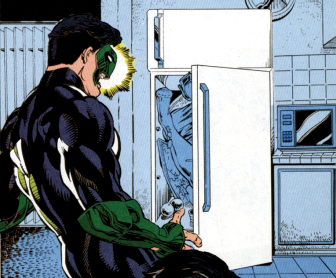 Most superhero stories have a formula. The hero is usually on the brink of a great change, and through his powers he moves into a new realm of existence where he will never see the world the same way again. Think of any major superhero. Spider-Man, for example, is a geeky loser. He gets bitten by a radioactive spider and suddenly he’s able to say and do the things he’s always wanted to do. The same goes for someone like Batman. Bruce Wayne is directionless and mournful until he decides to don a cape and run around the city of Gotham at night dressed like a bat.

Superhero stories eventually add another element: love. Gwen Stacy, Lois Lane, Carol Ferris and Mary Jane Watson are only a few of the many loves of superheroes. These people are meant to be a grounding force for the heroes, a person who centers a hero’s thoughts and keeps him sane and moral. Most, however, end up dying.

Gwen Stacy had her neck snapped by Spider-Man as he tried to save her from falling to death off the Brooklyn Bridge. Sue Dibny, the wife of the Elongated Man, was burned alive by Ray Palmer’s ex-wife, Jean Loring. Bruce Wayne has lost more than one love – his girlfriend, Silver St. Cloud, had her throat sliced open by Onomatopoeia and David Cain ordered the killing of Vesper Fairchild, a crime which was pinned on Wayne himself.

Granted, neither Lois Lane nor Mary Jane have died, but each has been a stagnant weight around her superhero counterpart’s neck. The Peter Parker/Mary Jane love story dragged on and on into nothingness. Writers complained about being stuck in narrative corners. They pretended to kill MJ, but then it was revealed she wasn’t on the plane that exploded. They tried moving her across the country, but Peter just spent his time pining for her. While many blasted Joe Quesada for his “One More Day” and “Brand New Day” retcons, they’ve worked out in Spidey’s favor – issues of Amazing Spider-Man without Mrs. Parker are receiving high praise from fans and reviewers alike. 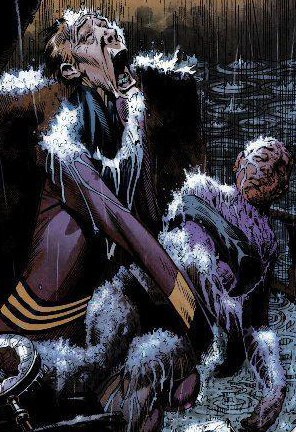 The same goes for Lois Lane. After years of doting on Lois, Clark eventually married her in 1996. They spent years in bland bliss while the rest of the comic world waited to see something happen with Superman. He couldn’t go off-world anymore because he was tied to Lois, and she was constantly a target for Supes’ villains. It must have been tedious to write a Superman comic and know that you had to, at some point, throw in a line about his relationship with his wife. Thankfully, due to the New 52, Lois and Clark’s relationship is no more. Big Blue can soar around the universe without worrying about keeping his wedding ring visible.

These are extreme examples, I know, because relationships can sometimes work. Hal Jordan’s on again/off again romance with Carol Ferris makes for some great moments, especially in the Geoff Johns’ Green Lantern series. Kathy Kane and Maggie Sawyer make a great couple. And Alana and Marko from Brian K. Vaughan’s Saga are my new favorite lovers.

But for the most part, love in comics doesn’t work. It either ends up with someone dead or a hero stuck in a narrative mud pit. Superheros are supposed to beat up bad guys and do cool things with their powers, not worry about missing dates with their girlfriends or worry about what tie to wear to a wedding. These moments have their place, but they rarely occur.

I praise the single superhero. He can be strong, clever and battle the evils of the world. And he doesn’t have to make up excuses for missing dinner.