I completely missed Driver: San Francisco when it came out in September last year. Partly, there were just too many games coming out, and I was never going to get around to all of them. But mostly, I am now ashamed to admit, I just didn’t think it was a game worth caring about. I thought it would be Just-Another-Open-World-Cops-and-Robbers-in-Cars game. I’d had enough of those already.

Using the quiet opening months of 2012 to catch up on my 2011 backlog, I finally decided to give Driver: SF a go. I was still skeptical, but by now I had heard enough of my fellow writers singing its praise to warrant checking it out.

Paradoxically, by taking place in a dream, Driver: SF’s world feels all the more real

There are few games I have been so wrong about. Driver: SF is one of the most gloriously and proudly weird AAA games I’ve ever played that wasn’t developed in Japan. There is a bizarre surreality to it, yet it takes itself utterly and completely seriously. It is entirely committed to its own ludicrous world.

Ironically, the attribute most fundamental to Driver: SF’s awesomeness is the very reason I was reluctant to actually play it. At the start of the game, a car crash puts playable character John Tanner into a coma, and the rest of the game takes place in his head, in his dreams.

It is a setup that, in other media, I can’t stand. I could never get into the television series Life on Mars, for instance, because the whole story being inside a dream seemed to render it all meaningless. Nothing really mattered, so why waste my time watching it?

But in Driver: SF, the context of a dream world has the polar opposite effect. It doesn’t break my immersion or render my actions meaningless. Rather, it grounds the very weirdness native to all videogames. It justifies those things that sit in the corner of your vision in any videogame world, the things that if you focus on for too long, threaten to tear the fabric of the entire virtual world apart. 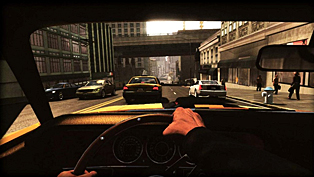 There is a mission towards the start of Driver: SF that hit home to me not just in the dreamlike nature of its world, but the dreamlike nature of all videogame worlds. In this mission, Tanner has taken over the body of a female singer’s driver. In the backseat, the singer is on her phone with her abusive boyfriend or agent (it’s never made particularly clear). He is threatening to bring his gang to her concert to rip stuff up. She calls his bluff, saying he can’t even get to the concert because it is a private gig at a private venue. He counters with the fact that she has placed signs all over the city with the venue’s name on it. The solution is clear: On the way to the venue, you must driver through and smash all the signs so that the abusive boyfriend/agent/gangster can’t find the gig.

It plays like any other videogame mission ever: There is a thin veil of fictional context to justify your absurd goals, and then you do it. But you think about it for any longer than a second, and the plausibility of such circumstances begins to unravel: If the guy already knows about the signs, surely he already knows about the venue, right? It’s ridiculous! But in Driver: SF it works so well because you truly are in a dream. Read that last paragraph again. Describing that mission reads exactly like how you would describe a dream right after you wake up – a dream that seemed entirely plausible while you were in it but which seems utterly absurd now that you are awake and are trying to explain it.

All videogame worlds are dreamlike. They are all realistic-ish in some respects while completely absurd in others. The sense of immersion we crave in videogame play isn’t a passive act of being tricked into thinking we are “really” in another world, it is an active act of consciously making believe. If we are engaged enough with a game, we explain away the absurd blind spots of unreality in order to feel immersed.

We cause ridiculous domino effects to get out of gaol cells. We shoot gas tankers while somehow knowing the building next to it will fall at just the right angle to kill the monster but not us. We suddenly have unlimited ammo at just the right time. We hardly notice when the shop owner says exactly the same thing every single time we visit her. It’s weird. It’s almost like our character is choosing what will and won’t happen. Just like a dream.

Of course, just like dreams, something so weird that it actually breaks our immersion could potentially happen. Something that we cannot in any way convince ourselves we didn’t see. This could be anything from a glitch to an absurdly dumb level or an unconvincing character. The beauty of Driver: SF, then, is that by taking place entirely in a dream, the weird and glitchy attributes inherent to all videogames are accounted for and given a reason to be there: They are there because it is a dream. Paradoxically, by taking place in a dream, Driver: SF’s world feels all the more real.

The nonsensical makes sense. It is something the game does deliberately when it toys with gaming conventions, bringing clearly into focus things other games try to conceal. Another mission early in the game has Tanner chasing a suspect across the city, but she loses the player by entering an area of San Francisco the player hasn’t unlocked yet. Things that would stand out and risk un-engaging me from the experience of any other game instead reinforce the very fabric of Driver: SF’s dream world to me. 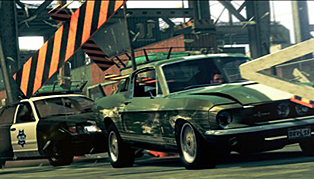 This is especially true when Tanner’s dream world starts to fall apart towards the end of the game, when his questioning of his own reality leads to it becoming even more unreal. Time itself will stop, or the game’s antagonist will suddenly have the same magical powers of swapping bodies as Tanner has, or a passenger in a car will, entirely out of context, tell John to “wake up.”

Once we start to lose the sense of immersion we have in a game, it can be nearly impossible to get it back. More and more unrealities become visible, stand out and remove us from the experience. The same can happen in our dreams, perhaps even waking us up if something too weird happens.

This is precisely what happens to Tanner. As he becomes more aware of his world’s unreality, it unravels even further. Yet, the effect on me, the player, is the opposite. By understanding how all videogame worlds work like dreams, by embracing this instead of trying to hide it, Driver: SF creates one of the most engaging and transfixing videogame experiences I’ve had in recent times.