Growing up in the 1980s, it was always hard to miss DC Comics’ ads for Wild Dog. A submachine gun-toting lunatic wearing a hockey mask and bright turquoise football jersey is a little tough to ignore. The laughing red dog on the jersey didn’t hurt, either.

While Marvel’s Punisher was busy firing rocket launchers into motel rooms, Wild Dog was protecting the breadbasket of America from homegrown terrorists. The novel idea behind Wild Dog was that he didn’t protect a big city – he was a suburban superhero. Wild Dog patrolled the Quad Cities, a real-world group of five cities that straddle the Iowa-Illinois boundary of the Mississippi River. The book was supposed to be a touchstone for the majority of comic readers. You know, the ones that don’t live in big cities. 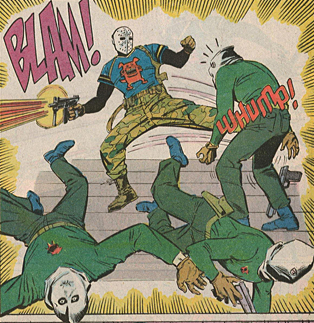 Wild Dog is one of those gritty vigilante characters that started popping up after the Punisher’s success. The first time Wild Dog appears, he barges into a hostage situation, shooting terrorists in the face and fighting dirty.

A kick to the nuts aside, Max Allan Collins, Terry Beatty and company take the time to showcase some technological marvels like electroshock gloves and bulletproof vests that allow the everyday person to appear to have the powers of Superman. I thought this was going on a lot in Batman at the same time, but maybe they thought there were comic readers who were more interested in Jason Voorhees with a machine gun than Batman.

A conceit of the initial miniseries was keeping Wild Dog’s identity a secret until the fourth and final issue. Readers judged Wild Dog by his actions while they got to follow four friends and an ambitious TV news reporter, Susan King. King tracks down the Wild Dog story after he saves her from the exploding mall situation.

For me, the breakout star of the book is meddling reporter King. She’s the first character we meet in the book and it’s mostly her story. She’s comics’ stereotypical nosy reporter. Susan has a no-nonsense attitude and she’s willing to do anything to get her story. She also calls her rival, the network’s anchorwoman, a slut at least once an issue.

The villains of the story are the homegrown terrorist organization, the Committee for Social Change. The committee blows up a mall, goes after a gymnasium full of honors students and an army arsenal. The final issue of the series focuses on the question of “Who is Wild Dog?” and explores his origin. 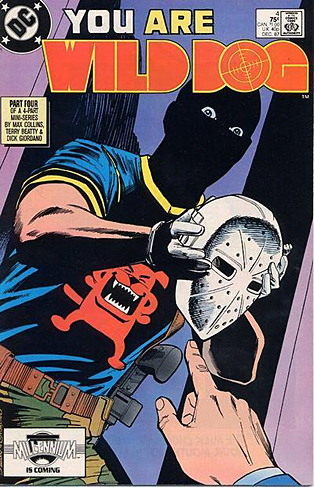 The book follows four characters who could be Wild Dog.

Graham Gault – Liaison between the CIA and the FBI.

The four men played football for the local state university’s football team, the Red Dogs. Wild Dog wears their football jersey. Coincidence? Also, all four men talk about how they wish someone would do something about this omnipresent threat of homegrown terror.

At the time of Wild Dog’s publication, the concept of homegrown terror may have been fodder for talking heads and op-ed pieces, but the only active homegrown terrorist in the two years preceding was the Unabomber. Of course, this was a very different story around the world. However, given the Committee for Social Change’s very similar agenda, I think it’s safe to say the Unabomber’s neo-Luddite campaign had some effect on the story.

Wild Dog is a snapshot of 1980s comics and a prophet of the grim and gritty 1990s that were to come. With its locale and mystery angle, Wild Dog was an attempt at telling a different kind of superhero story in the 1980s, though that meant DC dipping their feet into the Punisher pool.

Wild Dog went onto appear in Action Comics Weekly, Wild Dog Special #1 and guest appeared in Lobo, Infinite Crisis and Booster Gold. While there are no Wild Dog collected editions at this time, who knows when they may appear? After all, I stumbled upon the Essential Howard the Duck a few years ago – and Lucasfilm made that property toxic!