On Wednesday, DC Comics announced Before Watchmen. A series of miniseries, Before Watchmen will serve as a prequel to Alan Moore and Dave Gibbons’ classic tale, Watchmen. While reading the news and reactions to Before Watchmen all day Wednesday, the disparity and severity of the opinions didn’t surprise me in the least. Personal insults were flung left and right by people who have never met the targets of their vitriol. Meanwhile, others expressed blind excitement for Minutemen by Darwyn Cooke, Silk Spectre by Mr. Cooke and Amanda Conner and Rorschach by Brian Azzarello and Lee Bermejo. Like most fans and pros, I had mixed feelings over the project. Then I read Eric Stephenson’s blog post that summed up the situation very succinctly.

Mr. Stephenson’s post is a sobering read. Alan Moore and Dave Gibbons had a highly publicized agreement with DC over the rights to Watchmen. At the time, trade paperback collections were not as ubiquitous as they are today. They were actually pretty rare. Mr. Moore and Mr. Gibbons expected the rights to their creation would revert to them within a year after issue 12 hit the stands. Watchmen has been in print in trade paperback form since 1987. In 1989, Alan Moore and DC Comics parted ways. 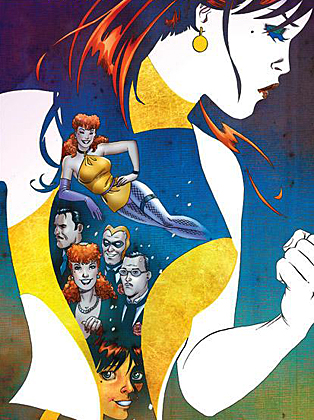 I was unconsciously, maybe even willfully ignorant, of the fact that trade paperbacks weren’t the norm. Sure, I’d heard the story that DC agreed to return the rights to Alan Moore and Dave Gibbons once Watchmen was out of print, but I always looked at the trade paperbacks and thought, “Well, it’s still selling, so why would they take it off the shelf?” Ah, ignorance is bliss.

In the summer of 1990, or maybe 1991, I remember going to a bookstore and seeing graphic novels there for the first time. There were four, to be precise: Batman: Year One, The Dark Knight Returns, First Comics’ color reprints of Teenage Mutant Ninja Turtles and Watchmen. I think there were some books about the Batman TV series and 1989’s Batman movie to fill out the shelf, but those were the comic books present. That was the first time I’d encountered Watchmen and the idea of the graphic novel.

The current regime at DC Comics is not the one that made the agreement with Mr. Moore and Mr. Gibbons. I don’t think the motivations behind Before Watchmen are sinister in the least. A Watchmen prequel will make money and it’s their responsibility to make the company money. That way the marketers, assistants, mailroom people, etc. can all pay the rent and feed their families. That is the point of a company – to make money.

Nonetheless, given the spirit of the original arrangement and the reality of the past 24 years, the mere concept of Before Watchmen is wrong. It is not defendable – at all.

As a writer for Unwinnable, I signed a contract. Unwinnable has exclusivity of any content I write for a reasonable amount of time and retains the right to keep it on the site or use it in any promotional way they see fit. If they want to reprint it in an annual, they can. They were kind enough to give me a platform for my ravings in the first place, why shouldn’t they be allowed to republish? If I want to expand the content into a larger work after the exclusivity period, I can. I own it. It’s a fair agreement between two parties.

Now, if they wanted to expand the work without my consent, that would be wrong. Thankfully, that is not the case.

The very public agreement between Alan Moore, Dave Gibbons and DC Comics was hailed as a victory for creators’ rights, but it wound up being just another way for the publisher to swindle the talent. For every Jerry Robinson, there are more Bill Fingers.

What do Mr. Moore and Mr. Gibbons think about the project now? Alan Moore told the New York Times that he felt the project was “completely shameless.” Mr. Moore has never had any trouble voicing his disgust with his past relationship with the comic publisher.

Dave Gibbons doesn’t exactly sound enthusiastic about the whole affair either. “The original series of Watchmen is the complete story that Alan Moore and I wanted to tell,” he said in DC’s press release. “However, I appreciate DC’s reasons for this initiative and the wish of the artists and writers involved to pay tribute to our work. May these new additions have the success they desire.”

These two creators did so much to elevate the medium’s presence beyond the newsstand and the comic book store. We hold the work in such high esteem, we forget the story behind it. Before Watchmen’s existence is another sad chapter in the story of comic publishers and creators’ rights – and the books aren’t even out yet.

Unwinnable will soon be expanding Ian’s work without his consent. Watch him rant and rave on Twitter @IanGonzales.

When to Hold ’em and When to Fold ’em
Previous Post