Looking at all of Mark Millar’s latest work, I enjoyed Superior the most. The book has heart, like Millar really wanted readers to understand that regardless of our disabilities, everyone can be a superhero. Superior isn’t as great as The Ultimates or the original Kick-Ass, but it’s a step in the right direction (and quite an improvement from the shit-bag that was Ultimate Comics Avengers). The book is littered with clichés (including my least favorite, “Once and for all!”), but the story has a pretty epic ending and it manages to maintain its heart – even if it is a bit too hokey.

Simon Pooni discovered that his abilities as Superior were given to him by a demon named Ormon (who appears inhabiting the body of an astronaut ape). Ormon is looking for a human soul to keep from a pretty severe punishment over the next 500 years. To help Simon along, this demon took the snottiest kid in school – and Simon’s one enemy – Abraxas, and gave him his own powers and free rein to destroy the city. Without any other choice, Simon takes up the mantle of Superior again and throws down with both the bully and the ape (who takes the form of a 100-foot, skull-faced, mechanical monster). 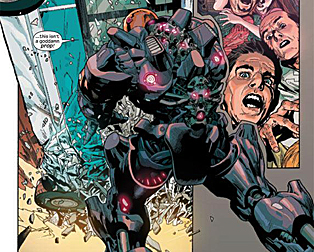 Many splash pages and stock phrases later, Simon is able to remove the monkey from his suit and defeat the bully. Thinking he’s won, the demon starts celebrating, until a reporter friend of Simon’s discovers a loophole that allows him to keep his soul (even though he loses his powers) and send the demon to the farthest reaches of hell.

Pretty silly, I know. But the final few pages really showcase the point of the issue. After Superior “dies,” people come together in his honor. The show of decency from one person to another is more of an accomplishment than Simon could hope to achieve in a lifetime as a superhero. The dedication at the end of the issue says it all: “To Christopher Reeve and Richard Donner.”

I think this focus is what made Superior such a coherent read. Millar wasn’t writing for the sake of getting a paycheck (although he probably got a hefty one, as the comic is published under his own banner – Millarworld). Instead, the book seems more geared toward making a statement about heroism and humanity. People can, regardless of ability, be positive influences on the world. Much like Christopher Reeve, Simon Pooni is able to make a huge impact on the people around him, despite having a disability. Super powers don’t make a superhero, a caveat of comics repeated in almost every superhero ever created (make a list – you’ll see I’m right).

This is the kind of uplifting story that children with disabilities should read. Millar has really tapped into an idea to which many people can relate. Even if you hate this kind of sappy stuff, you have to admit it: Christopher Reeve did more without a cape than he could have ever done with one on. 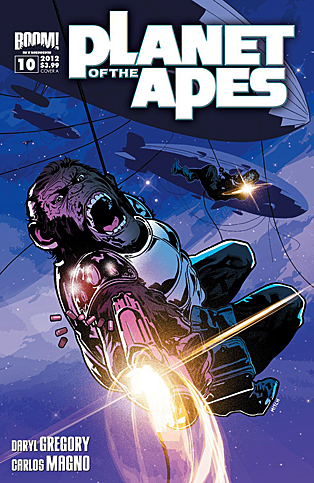 I picked this comic up because of the cover. How could a comic like this not interest you? It turns out that Planet of the Apes has some intense action, well-written dialogue and a story that hearkens back to Nazi Germany and the initial laws imposed against the Jewish people. In this context, the story becomes more relatable, and I think readers can see beyond the ape/human conflict to the bigger issues of genocide and bigotry.

I haven’t been reading this series, so I’m trying to work my way into it. According to the blurb at the beginning of the issue, a revered ape leader was recently assassinated by a human. This threw the human/ape alliance into the fire, and then causes the initial breakdown of the society. Told from a few different viewpoints, the story allows readers to witness first the storming of rural villages by armed guards, the end of a friendship between a young girl and her young ape friend and, lastly, the introduction of guns.

As an allegory for human interrelationships, Planet of the Apes shows how human beings are less accepting of other races. This shouldn’t really surprise anyone. What this does is make the reader sympathetic toward the apes, and it creates a division between people who are accepting of others and those who hold onto violence and hatred.

What really surprised me was that for a Planet of the Apes story, this comic has a lot of depth. From reading the current plot synopsis, I can see that Daryl Gregory wanted to do more than just retell humanity’s downfall and the rise of the apes; instead, he’s crafting a tale that shows the beginnings of war and the ways in which human beings will doom themselves by not working with people of other cultures.

There is no moment where someone shouts, “You blew it up!” but I’m waiting for it. It seems like Gregory is having a lot of fun writing within the Planet of the Apes mythos, as well as inventing some elements of his own. I found this comic to be contemporary and its themes to be universal. It’s entertaining and engaging.

If anything, it will bring us closer to that Planet of the Apes musical we’ve all been waiting for. 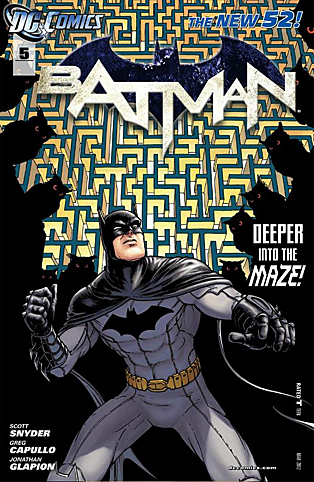 Bannen’s Book of the Week: I know you’ve seen this before – Scott Snyder’s Batman as the book of the week. But there’s a different reason this time. I’ve never, ever experienced a comic that makes the reader such an integral part of the story. Batman #5 forces the reader to enter the twisted, labyrinthine world of the Court of Owls, and for a few moments, to feel as lost, as disoriented and as alone as Batman feels.

In the previous issue, Batman found himself trapped in a literal labyrinth beneath one of the secret hideouts of the Court of Owls. When he awakes, confused and lost, he has to traverse a series of rooms that slowly piece together Gotham’s secret history. Using strange lights and drugged water, the Court pushes Bruce to the brink of insanity. Drawn with one bloodshot eye gaping through a hole in the cowl, Batman looks crazier than ever. Through Greg Capullo’s visuals, readers can see the desperation in his face as he tries to escape. In the end, Batman’s new nemesis catches up to him and leaves him bloodied and dying with a sword protruding from his stomach.

The best part of the issue (if nothing else has piqued your interest) is the comic construction. After Bruce has been drugged, Snyder and Capullo force you to turn the comic sideways to read the story, as the panels move vertically across the next three splash pages. Then – and here’s the best part – you’re made to turn the comic upside down and read it backwards. Much like a funhouse, the effect is disorienting but a hell of a lot of fun.

Reading comics can be such a sedentary activity. Insisting that the reader be an active member of the story shows that Snyder is a new breed of comic writer, one who can create a story that takes twists and turns – literally – and brings the reader along in a new and exciting way.

It may be a gimmick, but it’s a new gimmick to me. It was the highlight of the issue, showcasing the power of the enemy and the futile attempt Batman makes to fight him. I’ve never seen Bruce look so weak! And while most arcs end with the hero victorious, I don’t see such a clear-cut resolution here.

Snyder’s work on Detective Comics proves that he can craft an ending that is both satisfying and haunting. The implications of that run are far-reaching, and with his current work on Batman, I don’t see a positive end in Bruce’s future.

Snyder is a master storyteller, and Batman is a fantastic series. Out of DC’s entire New 52, this is easily the best one and the series you should have in your collection. Don’t be surprised if you see it in the “Book of the Week” column again.

Batman, Planet of the Apes, Superior