Guest writer Stefan Jeremiah is an expatriate Englishman living in New York City. A globally published photojournalist working for the likes of Magnum, Getty and WireImage, someone once told him, “Leave the words to the writers.” Unwinnable decided that person was full of crap and gave Stef a second chance so he could discuss his love of the classic N64 game GoldenEye 007 and its recently released next-gen upgrade, GoldenEye 007: Reloaded.

I grew up in the halcyon days of NES and SNES. I was always a Nintendo man, but in my late teens, my love for videogames began to wane. I was disappointed at the poor catalog of games for the SNES in comparison to what was available on the Megadrive/Genesis and the market share for the next generation of consoles was now being fought over by the newer kids on the block: Sony with the PlayStation and Sega, with its turd the Saturn.

When Nintendo finally showed up late as hell to the party, I wasn’t initially moved by its offering. The N64 was a 3D, 64-bit cartridge loading monster with a funky new controller. In predictable Nintendo style, it launched with a Mario title. For me, though, it wasn’t enough. I was over Mario. I’d completed the original Super Mario Bros., the sequels on the NES and Mario World on the SNES.

In the time Nintendo had stalled, I’d learned to smoke, I’d been arrested for drunk and disorderly and I’d done questionable things that would have had me beaten by many a daughters’ father (if they’d known). This 64-bit Mario looked good, but I’d moved on.

I rinsed the holy shit out of that game

That is, until I played GoldenEye 007. I rinsed the shit out of that game. It wasn’t the first gun-blasting first-person shooter and there were others that were far gorier, but rolling ’round as 007 and wasting people was beyond satisfying. Playing the split-screen multiplayer and greasing your buddies made me equally euphoric.

The game levels loosely followed the namesake movie’s plot as you ran around underground bunkers, jungles and missile silos, wiping out dirty commie soldiers at every turn. Basically, your job was to shoot everyone in front of you except the odd random scientist and The Girl. The game even ended with you nailing her! (OK, it’s just kissing…)

When I say I rinsed the shit out of that game, I mean, I rinsed the holy shit out of that game [Editor’s Note: Stef is English. We don’t really know what he means either, but we gather that dishwashing is a very satisfying recreational pursuit in the United Kingdom]. I played it to the nth degree. I completed it on every difficulty setting, opened up all the achievements and secret levels. So when I saw the reboot, GoldenEye 007: Reloaded, had finally made it to the Xbox 360, I damn near shat my pants with excitement.

I completed it on the easiest setting in two days, with little food, water or clothing. My roommate hates me.

The reboot is similar to the original as it attempts to follow the movie’s plot lines, only now with Daniel Craig’s mug pasted in where Pierce Brosnan was in 1997. This is definitely a new game, however. Graphically, it looks awesome, as you’d expect these days. There is an excellent blending of Splinter Cell and Medal of Honor as some things call for stealth and others carnage.

To the untrained eye, it looks and plays like so many first-person shooters that have come out since the original N64 version. But what really sealed it for me was that Reloaded feels right. It has the same element of satisfaction that came with being James Bond in the original. From the pull of the trigger as you cream a few rounds into some goon, to pissing around with your smartphone taking snappy snaps of some helicopter that was nicked by some Russian mafia knobhead.

The Wii certainly has its place and I can understand that some people like to jump up and down and wave their fucking arms around when they play videogames, but if you’re like me, I like to play them without incurring a hernia (although you should see my goal celebrations when I score at FIFA. My roommate hates me). So now that GoldenEye 007: Reloaded is out on Xbox 360 (and PlayStation 3, if you are into that sort of thing), I’ll be losing an unhealthy chunk of my life rinsing the shit out of it online.

You should do the same. 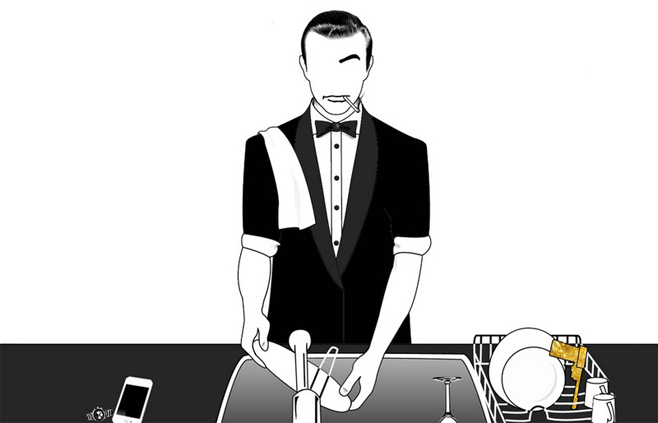 You can get more of Stefan’s words, and his photography, at Bear Witness Pictures. Illustrations by Chrissy Imperiale.

A Planet Where Apes are Animated on Men?