It’s time for the Academy to take the next step in evolution.

On Tuesday, the results of voting by the more than 5,700 movie industry insiders who make up the Academy of Motion Picture Arts and Sciences will be in. There will be five nominees for the Best Supporting Actor Oscar, and by all accounts Andy Serkis will not be among them for his critically lauded turn in Rise of the Planet of the Apes.

In early December, back when the envelopes were first being sent to voters, 20th Century Fox took out a full-page ad in the Hollywood trades with the headline, “The Time is Now.” The ad features side-by-side shots of Serkis in his mo-cap gear and the post-animated Caesar striking the same facial expression. Included was a pull quote from Richard Corliss, the Time magazine critic: “Serkis gives a performance so nuanced and powerful it may challenge the Academy to give an Oscar to an actor who is never seen in the film.”

And therein lies the problem. 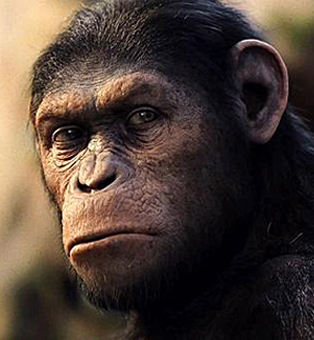 Caesar looks like the handiwork of computer animators but moves like a real chimp. Unless they’ve had the privilege of spending two days on the set of Rise of the Planet of the Apes and watching Serkis in action, it’s hard for voters to gauge how much the man who breathed life into Gollum and King Kong brings to the performance.

However, seeing him on the set – loping around on arm extensions with those ridiculous markers pasted all over his face and the wetsuit-like outfit he wears – you understand that he isn’t just monkeying around. Before the cameras started rolling, he watched hours and hours of videotapes of chimpanzees in the wild and mapped out Caesar’s backstory in his head.

“When we’re going about researching apes and so on, you’re not just looking for movement,” Serkis told reporters during the 2010 set visit. “This isn’t motion capture; we’re not just capturing motion. You can put dots on an ape and let him run wild in a studio and you’d get some great motion, but this is about performance. It’s about making acting choices about where your character is at any step of the journey.”

No offense to James Franco, who proved in 127 Hours that he could act with one arm tied behind his back (rimshot). But between takes on the set of Rise, Franco, the actor with the film’s top billing, would find a patch of Vancouver grass in which to sit and read. Serkis, meanwhile, was almost always stretching and practicing like an Olympic athlete.

Franco himself has nothing but praise for his co-star in the form-fitting blue and gray unitard. “The imagination just kind of takes over, like you meet someone and the next day they are playing your mother,” he said on the set. “You kind of roll with it if the scene is working. Andy was so good with the chimp behavior that it was actually pretty easy to fall into that kind of relationship.”

Filming it is anything but easy for a performance capture artist like Serkis. The dozens of markers on him are picked up by the ring of cameras that line the “volume” – a room in which most of the acting is done – and translated into a 3D model of his body as he moves. That skeletal shape can be converted in the post-production animation process into just about anything that’s roughly human-shaped. Serkis didn’t just play Caesar in the film – he and his fellow performance capture actors also filmed several of the background apes for the captivity and bridge scenes.

Let’s see Christopher Plummer, Albert Brooks, Jonah Hill or any of the other probable Best Supporting Actor nominees do that.

Ask Jamie Bell, the star of the recent The Adventures of Tintin, how physically demanding performance capture can be.

“It’s physical enough that I threw out a rib and had two misaligned vertebrae making the movie, which obviously is something a little more than voice work,” he told Unwinnable.

How did he injure himself? Chasing a tennis ball that would later become an animated cat rampaging through Tintin’s apartment. 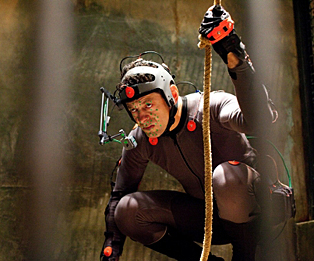 “It’s not even that big of a deal, chasing a cat,” he said. “I remember the next day I woke up and I was like, yeah, I can’t breathe. Something’s wrong. Every time I take a deep breath I’m in great pain. So then I had to call in a chiropractor. He just put his hands on my back and felt around and was like, ‘Oh yeah, there’s a rib out and there are some misaligned vertebrae.’

Serkis, Bell’s costar on Tintin,is a little less apt to get injured, largely because he’s been doing this pretty steadily since The Lord of the Rings: The Two Towers a decade ago. The technology has advanced in leaps and bounds since.

“We’re engaging and finding moments which are real and just happening as you’re acting with someone else, basically. I think that’s the big realization across the board – that the whole industry is responding to the performance capture,” says Serkis. “It’s no longer this kind of strange, freakish activity that happens somewhere else; it’s absolutely part of the parcel of moviemaking now and is being accepted in that regard.”

The time should’ve been now.

Get your stinkin’ paws off Serkis’ Oscar, you damn dirty Christopher Plummer.

Motion Capture, Rise of the Planet of the Apes

I Double Dog Dare You To Go See Rise Of The Planet Of The Apes!

The Second Coming of GoldenEye