Buying a first issue of a new series can be a lot like gambling. Usually, you get a 50/50 chance of picking up a real stinker. The Activity, however, reads like Brian De Palma’s Mission Impossible. Nathan Edmondson (Olympus) pens the tale of an elite squad of military and civilian personnel, each with his or her own special talent. While their task still remains a secret, I enjoyed the spy-thriller feel Edmondson crafts and the uneasy resolution with which he leaves readers.

The Activity opens with our heroes causing a mild panic in a restaurant in Mexico City to extract some bearded dude. They turn him over to the Mexican authorities, then return home for their next assignment. We’re told that the group recently lost one of its team members. To replace this person, the group picks a soldier, Sergeant Leslie Ryan, to be the fifth member of the crew. They run an easy operation (destroying some files in an office) to indoctrinate their newest member. The scene seems to serve a dual purpose: show how the team operates, and give some background on its purpose. The issue ends with Ryan, three months prior, talking to a secretive person about, I assume, being part of the team.

While the issue isn’t a great #1, it offers enough to keep readers intrigued. Who is the dead team member? Who was Leslie talking to at the end of the issue? Why do the characters have very strange nicknames (like “Bookstore,” “Speak-Easy,” and “Switchfoot”)? What exactly does the title have to do with the story? The end of the issue offers a teaser to readers: “The activity brings you warfare without warning.”

I’m not sure what to make of this. It’s a neat slogan, but it does little to really elucidate the more cryptic aspects of the series. I like Mitch Gerads’ rough art. It gives the story an unsettling flavor, which helps highlight the danger in which these people find themselves. One of the caveats of spy stories seems to be a mole, and it looks like The Activity has that as well, but the quick flash at the end of the story is enigmatic enough that it’s hard to jump to conclusions early on.

If you’re a fan of the spy genre, I’d recommend The Activity. It’s got all the pieces necessary to make for a great thriller, and Edmondson’s writing never feels forced or cumbersome. This can be hard, I think, when delving into the spy arena. Think of all the crappy Bond films.

The Activity, luckily, seems to have a lot more going for it than a martini-drinking lead man. 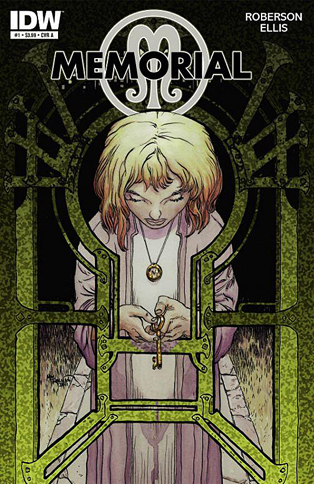 See my above interview about the 50/50 of new comics? Memorial is the other half of the equation. Maybe I had a hard time getting into a story about an amnesiac lead character, or maybe it had to do with the soldier statues, talking cats and mythological silliness of the title. Whatever it was, Memorial won’t be making my pull list.

The issue starts with a woman waking up at a hospital (she’s outside in the traffic circle) without any memory of her past. The only clue to her existence is an etched “M” on a necklace hung around her neck. After this introduction, readers are transported to a world where “Bellow,” a literal boy puppet, and “Hook, the Metal Man” (a half-metal-type guy in an expensive suit) talk with what can only be described as Dr. Claw from Inspector Gadget (he even sits in a stone chair hidden from view, much like the real Dr. Claw).

Meanwhile, Em goes on to live a normal existence, until she wanders into an eclectic shop owned by a Teddy Roosevelt ripoff who spouts nonsense phrases like, “Confound it all!” Once there, Em discovers a key that she must have. The shop owner gives it to her and she walks out the door to find an army of statues attacking her. The old man draws a sword and fends off the villains while she escapes back the way she came. Upon meeting a talking cat (at the conclusion of the story), she opens the door again to find herself standing on a beach.

I left quite a bit of story out because Memorial suffers from a lack of a coherent narrative. It bounces around so much that I felt lost while trying to read it, and coupled with the fact that the book takes many fantastical leaps in its story, without a clear basis for its purpose, Memorial clips along without the usual continuity normally found in comics.

Initially, I was very intrigued by Memorial (I love amnesia stories). When a character wakes up at the beginning of the story, half the fun is in finding out who the character is and why he or she has no memory of the past. Memorial asks too much of its readers. They are to first accept the character of Em, then move onto a world populated by statues that come to life, a living puppet man, a talking cat and a guy who looks like the Bond villain, Jaws. It’s too much to ask from the introductory audience. Maybe easing readers in would have been a better tactic.

From its overly silly plot to its overly fantastical characters, Memorial reads more like a Saturday morning cartoon than a serious comic. Not that I’m saying Chris Roberson intended for this be serious, but I bet he intended for the book to be interesting. While Memorial has a lot going for it (in terms of its imaginary world), the story feels a bit too forced to be effective. If instead he had slowly introduced the readers rather than tossing them right in, maybe the issue would have worked better.

I don’t feel a need to find out the mystery behind Em’s past or to know about the puppet or the metal man. I’ll stick to Scott Snyder’s Batman. That I can wrap my head around. 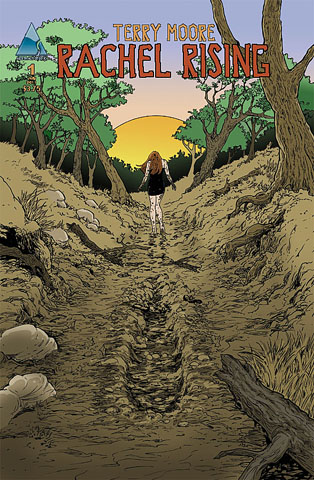 Bannen’s Book of the Week: Terry Moore is fast becoming my new favorite artist. His pencil and ink work in Rachel Rising should be celebrated, and his story – about a woman who returned from the dead after being killed by her boyfriend – has so much intrigue, I don’t know how people couldn’t like it. Issue #4 ratchets up the intensity as half the issue is spent on diagnosing Rachel’s problem, while the other half returns to the site where Rachel was buried. More disturbing things are going on there, and the final page adds a whole new level to an already detailed and captivating story.

In the previous issue, Rachel fell off a building and smashed into a parked car. Her aunt and cousin witnessed the death, and they now go to claim the body. What they find, however, is that Rachel is quite alive and seemingly uninjured. Rachel’s Aunt Johnny gives readers the clearest explanation of Rachel’s “issue.” Her pulse is down to six beats per minute, she breathes very shallowly and while she should be dead, she is barely hanging on to life.

The girl with whom Rachel fell was scooped up by a weird-looking dude who carries her body to the same spot Rachel was initially buried. Upon stuffing the body back into the ground (after a snake crawls through the corpse’s open mouth), the man encounters a little girl who asks his help burying another body. After he does, she smashes him in the head with a rock, then encounters a woman whom we saw in issue #1. The girl tells the woman she’ll never need her again. In the final panel, the girl stands alone in the moonlit field, the woman gone.

The simplicity of the art makes for an engaging read. Because Moore eschews color, the visuals rely on simple black and white shadows and shading. This doesn’t mean that Terry Moore can’t draw. On the contrary, his landscapes are beautiful and eerie. When he draws the creek bed where Rachel initially comes back to life, he puts odd curls into the trees and devotes most of the pages to black, both in shading and color. The result is unsettling. Additionally, his character faces are phenomenal. Moore has a way of depicting character emotions – vacant eyes, scrunched-up noses, general fear – that makes me wish I could draw. In fact, I think Moore may be responsible for inspiring many budding artists who read Rachel Rising.

He’s also an adept author. The story builds nicely, which makes it even more captivating. The banter between the characters – particularly Aunt Johnny, Jet and Rachel – result in the best moments of the comic. While dealing with aspects like murder and zombism, Moore still manages to throw in a fair amount of humor.

What makes Rachel Rising such a good read is the fact that it’s well-rounded as an issue. It has both great art and great storytelling, and I can’t praise Terry Moore enough. After reading this series, I’m enough of a Moore fan to go out and read his other works (like Strangers in Paradise). If you’re new to Terry Moore, like me, I implore you to pick up a copy of Rachel Rising and to get involved in the series. This is the kind of writing that people speak about for years to come.

Brian Bannen will get you next time, Gadget. NEXT TIME! (Find out how on Twitter @Oaser).