For the most part, 2011 felt like a B-side at the multiplex. Ticket sales were down compared to last year and there isn’t a potential Academy Award favorite that could hold a candle to either The King’s Speech or The Social Network. The superheroes that leaped onto the screen in a single bound – no offense to fans of Green Lantern and Thor – were more like sidekicks compared to the likes of Batman and Spider-Man. The year looks even worse when compared to next year, with Christopher Nolan’s The Dark Knight Rises, Marvel’s The Avengers, Ridley Scott’s Prometheus, the next James Bond, a return to Middle Earth and much more on the horizon.

Just when a geek could lose all hope, a number of movies arrived to surprise us. Most of the top ten that made our list weren’t big-budget sequels about robots in disguise, but great stories that made the popcorn taste better. J.J. Abrams’s Super 8 made us nostalgic for the grainy Spielberg ’70s with its government cover-ups and secret alien invasions. Ryan Gosling went zero to sixty from pretty boy to badass in Drive. Captain America threw his mighty shield. Harry Potter went out with one last magic trick for the ages.

By the times the end credits rolled after The Girl With the Dragon Tattoo last week, we realized maybe this year had some charm of its own after all. 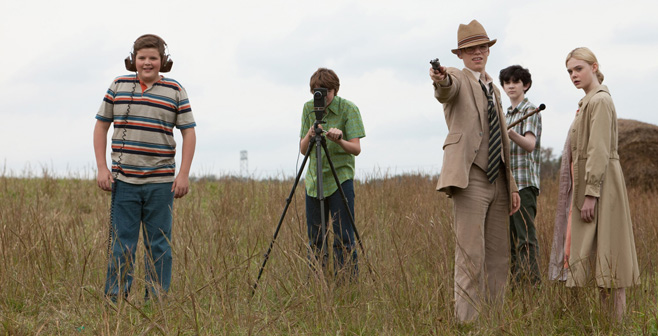 Super 8 focuses on a group of five friends, a girl and a visitor from outer space. While making a super 8mm film for Ohio’s state film festival, Joe Lamb, Charles Kaznyk, Alice Dainard and the rest of the 13-year-old crew witness a secret government train derail – a train carrying a mysterious creature. The kids are not cute, politically correct and frustratingly naive like so many young heroes of contemporary summer cinema. These kids are clever and inappropriate.

What’s strange about Super 8 is that it’s J.J. Abrams’ love letter to Steven Spielberg – his co-producer on the film. Somehow, Spielberg’s Little Rascals meet The Thing From Another World formula mutates into a blend of E.T. and Alien. The film may be unapologetic nostalgia with an ending that’s about as visually subtle as a kitten trapped in a meat grinder, but it’s still a lot of fun.

Super 8‘s idealistic picture of 1979 is something that could only come out of Hollywood. It’s a nostalgic blend of formula and emotion with expansive sets, bright colors and the family dog – the perfect distillation of the past that the best of Hollywood’s summer movies can give us. It’s no wonder Team Unwinnable loved the flick.

The Alley of Swords Award: 13 Assassins

It is hard for me to believe that director Takashi Miike, best known as a purveyor of gruesome and disturbing horror flicks, was capable of creating a movie as perfect as 13 Assassins. It isn’t just a damn fine jidaigeki movie, but a great film – stripped down to its essentials and honed sharp as a samurai sword. It stands shoulder to shoulder with the best of Akira Kurosawa’s work.

And if you don’t care about well-crafted filmmaking or the proud tradition of Japanese sword play movies, you can focus on the fact that the entire second half of the movie is one enormous bloody and incredibly satisfying battle scene – more than 45 solid minutes of nonstop action. Every frame is splattered with enough blood to resemble a Jackson Pollock painting.

The Frog and the Scorpion Award: Drive

Drive is one of those rare contemporary American films that completely relies on what is actually there to tell its story. There aren’t any flashy pyrotechnics or gigantic CGI Senate proceedings cluttering up the story. Director Nicolas Winding Refn relies on his actors, the strength of his script and, most importantly, his frame to narrate his tale.

A blend of noir and samurai genres, Refn tells the story of Ryan Gosling’s enigmatic driver as he gets caught up in a heist that endangers the woman he loves and her son. Gosling’s character arc is reminiscent of other samurai translations like Le Samouraï and A Fistful of Dollars.  Stylistically, the film feels like a mix of Wild At Heart and Vanishing Point.

The final exceptional touch is the film’s soundtrack. It adds a near pitch-perfect addition to the film’s mood. A mix of ’80s electronic ambiance and a score influenced by John Carpenter and Angelo Badalamenti, the Drive soundtrack accompanies the film’s haunting visuals.

Drive is a classic story set to a ’70s crime thriller’s pace. It’s refreshingly simple and challenges the viewer just enough so that it lingers long after the theater’s lights go up.

The Page 596 Award: Harry Potter and the Deathly Hallows, Part 2

“Words are, in my not-so-humble opinion, our most inexhaustible source of magic,” the spirit of Professor Dumbledore tells Harry Potter in a strange afterlife as the hero of author J.K. Rowling’s epic series nears his final confrontation with Lord Voldemort. “Capable of both inflicting injury, and remedying it.”

But there aren’t enough words that can be crammed into one blurb about why Harry Potter and the Deathly Hallows, Part 2 (preferably in 3-D and in IMAX) was a great capper to a very good franchise. “Payoff” would be a start for all the subplots and hints dropped in the previous seven movies; “nostalgia” for leaving behind the characters that we cheered from our movie theater seats for a decade; “heart-breaking,” as in the sad origin story of Snape. “Rousing,” “thrilling,” “big,” “emotional,” “inspiring’ “funny” and “shocking” also deserve a place in the ledger.

Most of all, as far as us muggles are concerned, the grand goodbye to Hogwarts School of Witchcraft and Wizardry was “magical.”

Whether you’re a liberal or a conservative, want to Occupy Wall Street or cling to your one percent, it was hard to leave the multiplex after Captain America: The First Avenger and not feel a little more patriotic.

Who’ll hang a noose on the goose-stepping goose from Berlin? Why, Chris Evans, that’s who, as the former Human Torch proved worthy of carrying the most famous shield in comics. A worthy hero needed a worthy adversary, and boy, did he get one in Hugo Weaving’s Red Skull, who looked the part as evil personified.

Setting the action during World War II was a master stroke for Marvel Studios – for as great as the movie itself was (a fact that came as a surprise to most of Team Unwinnable), the last four minutes may have trumped the first two hours. Borrowing the now-classic Stan Lee/Jack Kirby storyline from Avengers #4, Steve Rogers finds himself a man out of time in modern-day Times Square. Cue the nail-biting wait for The Avengers to assemble in May 2012. If only we could whittle away the time in frozen suspended animation until then.

The That Should Have Sucked but Didn’t Award: X-Men: First Class

It had all the hallmarks of an epic disaster in the making. Fox’s mutant franchise was coming off the disappointing X-Men: Last Stand and director Matthew Vaughn jumped aboard late, finishing filming just months before his movie’s early June release date. It was a period piece set during the Cuban missile crisis. Hugh Jackman’s Wolverine, the breakout star of the first three X-Men, wasn’t in any of the trailers.

Then a funny thing happened on the way to the multiplex. The movie was actually good, really good. James McAvoy channeled Patrick Stewart as Professor X and Michael Fassbender showed his own mutant gift to bend all conventions and make the villain a hero for which the audience could cheer.

Perhaps most importantly, the movie did what a good prequel should do (take note, George Lucas!): be true to the characters that we fell in love with in the first place, fit into the mythology like a jigsaw puzzle piece and yet still find a way to surprise us.

The E.T. Phone Home – Wait, Didn’t We Already Give This Out? Award: Attack the Block

Attack the Block‘s tagline, Inner City Vs. Outer Space, sums up the premise. Set in the present day, in London’s South End, director Joe Cornish tells the story of what happens when a group of young teenage hoodlums wind up defending their neighborhood from an alien invasion.

What makes Attack the Block work is its application of the alien invasion formula to today’s real-world inner city. The characters are fleshed out through clever dialogue and intense action. The pace never lets up. After the first act, the characters spend the rest of the movie fending off and running from the aliens. Yet these kids crack wise the whole time and it doesn’t feel forced. “It’s not goofy or gaggy, it’s just teenagers being teenagers,” Cornish said of the film.

Attack the Block is nostalgia done differently. Here is a film set in the present day with kids being kids. There are no Dawn of the Dead posters or Aurora model kits, but the movie has loads of spirit, making it one of the best genre films of the year.

The Land of Ice and Snow Award: The Girl with the Dragon Tattoo

It’s a shame that after a disastrous $13 million opening weekend for David Fincher’s adaptation of The Girl with the Dragon Tattoo, we likely will never get the chance to see his final two installments of Stieg Larsson’s epic trilogy. We live in a world as cold and bleak as the snow-swept Vanger estates on Hedeby Island, where much of the movie’s action takes place. Fincher painted a masterpiece in blue, gray and black and yet few cast their eyes on it to appreciate it.

If there were any justice, Rooney Mara would get an Oscar for her turn as Lisbeth Salander, the 26-year-old, whose physical transformation is breathtaking, never mind all of the media concentration on the gaudy piercings and controversial (and very graphic) rape scene.

If it’s any consolation to Larsson fans, the actress who previously played Salander in the more successful Swedish movie adaptation fared slightly better at the box office this holiday season, starring in Sherlock Holmes: A Game of Shadows. 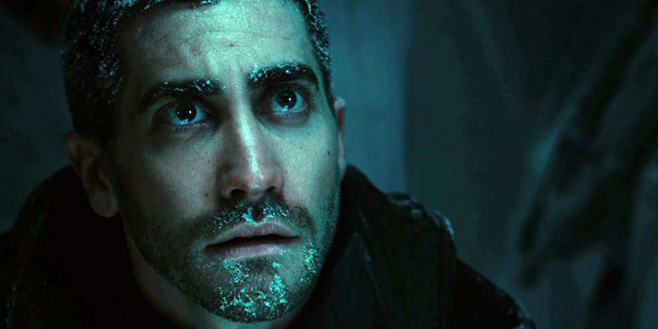 This much we can tell you about Source Code: the taut thriller stars Jake Gyllenhaal as a soldier attached to a secret government project that propels him into a stranger’s body on board a Chicago commuter train that’s set to explode in eight minutes – and sends him back again and again until he can piece together who set the bomb. We can also reveal that director Duncan Jones’ sophomore effort is even better than his first, 2009’s Moon, proving that David Bowie’s son is a force to be reckoned with in the sci-fi genre.

Anything else we spill about the year’s biggest and most pleasant cinematic surprise could unfold into the butterfly effect, complicating your viewing experience if you haven’t seen it already.

Troll Hunter is one of those rare examples of a found footage film that actually works. Though I can’t say I cared for any of the characters in particular, the movie alternated well between the intense and the hysterical. The setup prepares you for a horror movie, but I was pleasantly surprised to get a weird fantasy flick in its place.

Fellow Unwinnable staffer Dave Trainer turned me onto the movie early in 2011 and I couldn’t help but show everyone I knew. I am and always will be a sucker for Scandinavian troll lore (see Maelstrom in Epcot) and this is a perfect example as to why. Though not as intense as Cloverfield, Troll Hunter is unique and will not disappoint; it is definitely worth watching in 2012 if you missed it this year.

The Best Videogames of 2011