I’ve been avoiding writing about this series for several reasons. First, I wanted to like it. Second, George Pérez – the man who crafted the idea of the crossover – writes it, and I’d feel guilty criticizing him. And lastly, I’m rooting for DC’s reboot. So while I appreciate Pérez for his iconic work Crisis on Infinite Earths, Superman is a wordy book that offers a weak mystery and a narrative voice that hearkens back to the 1980s.

I had hopes for Superman #3 based on the opening page where Clark is seen putting flowers on his father’s grave. There’s an emotion evoked that makes him an immediately likable character. A narrative box above him gives a brief (new) history of the character, and over the next few pages, Pérez catches readers up on what they’ve missed. 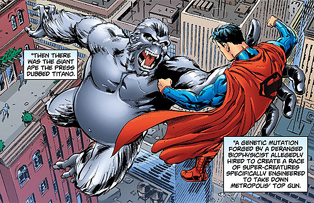 After this, we find out the face behind the voice. Some guy named McCoy is attempting to write a piece about Superman being a menace (I hear echoes of every Spider-Man comic featuring J. Jonah Jameson). Next, Supes is pulled from his cemetery visit to fight some swirling ice queen. After he blasts her with his heat vision, she disappears and meets up with several other mysterious beings.

I’m an avid reader, but getting through this comic was an ordeal. Each page is littered with a cumbersome amount of thought boxes, and reading through them felt like a chore. Pérez has too much introspection, going back to the days where the hero’s thought bubbles bordered on exposition and narration. For example, when Clark gets near the frost woman, she speaks in a Kryptonian-type language. Clark’s thoughts read, “Krypton again. All three aliens saying the same thing. But that’s a mystery for later.”

Why even bother? Clark’s thoughts don’t move the plot; they only clutter the page. Action sequences require readers to move their eyes quickly across a page in order to get a sense of time. By putting eleven thought boxes on a page, Superman’s speedy flight feels more like a Sunday drive with a grandparent. The same thing occurred with McCoy’s broadcast in the beginning of the comic. It brings the comic to a halt. This type of writing may have worked for Pérez in Crisis, but here it only creates a sterile, slow-moving product.

I’ve stuck by Superman for three issues, but I may put this comic aside until a new writer takes over. I’m not happy with anything I’ve read, and I doubt the solution to the problem will be as earth-shattering as it’s presented. I feel bad for Nicola Scott, Trevor Scott, Brian Buccellato, Brett Smith and Blond. These artists put a hell of a lot of effort into making the comic visually stimulating, but the art feels secondary to the narration. On the first read-through, I was so focused on getting through the damn comic that I didn’t take the time to appreciate the visuals.

Sorry, gang. Eschew some of the words and I’ll be more than happy to admire the art. 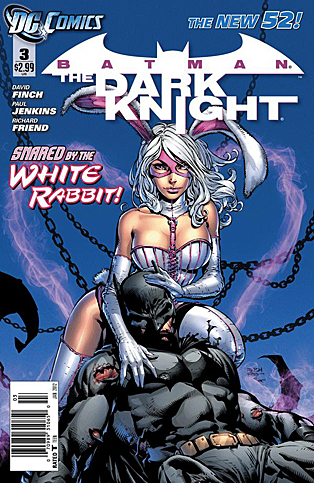 The Dark Knight is an OK book. I don’t find it particularly engaging, nor is it breaking new ground in the Batman world. But, my God, Richard Friend and Jeromy Cox should be lauded for their art in this book because while the story continues to be pretty average (with a few fun moments tossed in), the visuals have me hooked. I will continue to buy this book as long as these men are still in charge of drawing it.

We open where we left off – with Batman fighting a drugged-up Joker. Finch and Jenkins give us some of Batman’s detective skills in this issue, as he first figures out that the Joker isn’t really who he says he is. After a pretty violent fight with a villain who has the ability to mimic other people, Bruce meets the White Rabbit – a girl who dresses like a bunny and makes sexual advances towards our hero. Saved just in time by the Flash, Bruce and Barry go looking for the person behind the toxin that Bruce’s enemies keep injecting. Even though it traces back to Poison Ivy, we’re left with a pretty cryptic final page and a missing plant queen.

The issue is the same as all the others: not great. It feels like a videogame tie-in more than ever as it heavily echoes Arkham Asylum. A few shining moments exist where we get to see Batman be a badass, but for the most part, the issue doesn’t offer anything interesting regarding a “new” Batman.

I am, however, still enamored with David Finch’s Batman, and the times when he appears are the best in the issue. The filler moments with Bruce and his new love interest – the saucy Jai – read like bad romantic comedy dialogue. The dinner scene feels out of place, like Jenkins and Finch thought, “Oh, shit. We gotta remind people about Jai!” Finch’s drawings of Bruce still make him look like an emaciated child, but at least he looks cool as Batman.

If not for the visuals, I would condemn this book. But I’m drawn to the art. David Finch is no Gary Frank (a personal fave of mine), but he gets the job done. I want to find out the mystery of the white rabbit, and I want to see more of Batman fighting his villains (and if more JLA characters show up, that’d be a plus), but I wouldn’t go so far as recommending this book. It’s fun to look at, but that’s about it. 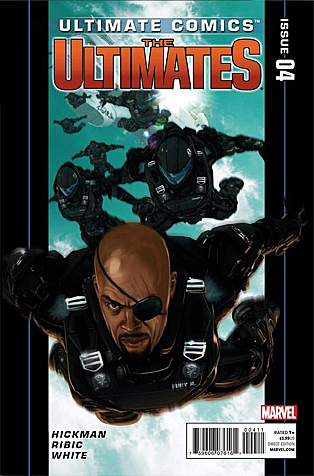 Bannen’s Book of the Week: I love what Jonathan Hickman is doing with the Ultimate Universe, and in The Ultimates, he introduced a new group of baddies that live within a dome and have their own superhero squad. After Captain Britain went in and never returned, Thor took it upon himself to bring him back. Thor eventually escapes but with a message for Nick Fury, and read no further if you don’t want this spoiled for you because it’s a pretty cool reveal and offers a lot for the future of the Ultimates.

The issue opens with Thor entering the “Dome” and making his way to Jamie Braddock – the new Captain Britain. After releasing Jamie from his shackles, Thor encounters the leader of the Dome, a mysterious man who wears a silver headpiece that covers the entire top of his head. Even though he tries to destroy this stranger, Thor gets his ass handed to him by some being called First Knife. The mysterious man shows Thor his face and asks him to deliver a message back to Nick Fury. Beaten and bloody, Thor has a vision of his father and all his friends in Valhalla. They give him the strength to return to Nick and share the message. In the end, two big secrets are revealed.

First, Thor did not see his father. It was Loki controlling him. And second, the mysterious man who controls the Dome is Reed Richards, who was last seen after Ultimate Doom when he was banished to some alternate dimension (but only after his face was disfigured by Sue Storm).

Well, Reed is back and nuttier than squirrel shit.

Jonathan Hickman does a great job of leading into the end of the issue, and even though I guessed who the character was (Thor cried out, “YOU!” when the villain revealed his face), I still had no idea about Loki’s role in the whole thing. The setup is pretty cool, and I’m looking forward to seeing how it will play out in the rest of the series.

The other shining star in this is Esad Ribic. His pencils are beautifully rendered, his characters lifelike in their emoting and painful to look at in defeat. Dean White must have done some of the coloring work with pencils because the issue doesn’t look overproduced. If anything, White does a great job of complementing Ribic’s art, adding the perfect amount of detail in every panel.

The Ultimate Universe just seems populated with good writers, and Marvel knows how to bring in talent. Jonathan Hickman’s writing is awesome, and the series so far has been exceeding my expectations. I can’t wait to see how the current arc ends and what other surprises Hickman has in store for us.

Read this series. Or at least buy it to look at the pictures. Everything about this comic is worth the money.

Brian Bannen prefers his peanut butter to be nuttier than… well – you get the idea. Check him out on Twitter at @Oaser.