The Legend of Zelda: Skyward Sword is my first attempt at a Zelda game since The Adventure of Link. So yes, I missed out on A Link to the Past, arguably the best game in the series if my friends are to be believed. The 3D revolution brought on by Ocarina of Time and Majora’s Mask? The cel-shaded glory of The Wind Waker? Skipped all that, too. I did buy Twilight Princess, but I admit I did so solely for far more nefarious purposes. So Skyward Sword is a complete sea change for me – one that, frankly, hurts the series more than helps. 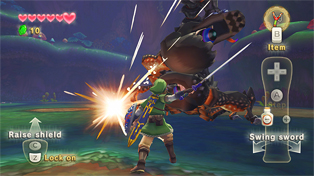 What made the Zelda games must-haves for me was the combination of adventure and platforming. The same ideas are present in Skyward Sword, and certainly movement is fluid. Combat, on the other hand, leaves a bit to be desired. Precision striking, required to kill many enemies, is hit or miss (pardon the pun). The instinct when playing a sword fighting game with motion controls is to take broader strokes with the controller, and when the game requires some differentiation between a horizontal and a diagonal slash, those broader strokes are, unfortunately, open to interpretation by the controller and the game. Likewise, even shorter, more controlled movements are not always perceived correctly. While there are very few instances where this is a problem, one of those instances is a training mission while another is an early boss battle. Certainly, both prove frustrating.

Like many modern adventure games, there is plenty of time filler in the form of fetch quests. It’s to be expected, and to criticize the game for including them is silly. But the flaw is not giving the player much in the way of excitement between fetch quests. There’s very little that makes me want to go back to the surface world to continue.

The story follows the traditional archetype: Zelda’s lost, Link has to find her and kill baddies. The story itself isn’t compelling enough to drive it along and the game ends up as an exercise in tedium. Case in point: Much of the movement from Skyloft (Link’s home) to the surface world is accomplished by flying. Passing through nondescript skyscapes and floating islands (home to more fetch quests) takes a long time and comes off as little more than a tech demo for Wii MotionPlus. Yeah, we get it, Nintendo. Wii MotionPlus is great. But we learned that two years ago when Wii Sports Resort came out. Enough wowing us with the hardware!

Where the game shines, though, is visual presentation. It may be, by far, the best looking Wii game yet. Distant objects, instead of simply blurring their way out of existence, become unfocused to the point where they look more like a French impressionist painting. It may have been done as a concession to the Wii’s lack of graphical oomph, but it works exceptionally well. I’d also be remiss if I didn’t mention Koji Kondo’s score, which is appropriately majestic, and fans of Kondo’s work would be well advised to get the limited edition bundle if only for the soundtrack disc, which highlights various musical motifs from the last 25 years of Zelda games.

The end result? An experience that is visually stimulating but artistically lacking and feels like it goes on way too long. In other words, the videogame equivalent of a Kiss concert.

@UnwinnableDonB wants to rock and roll all night, but not battle Octoroks every day.