Activision’s hype machine for Call of Duty: Modern Warfare 3 has been in full effect for the better part of the last two months and, with this week’s release, it’s gone into overdrive. Case in point: if this past weekend’s NFL broadcasts were any indication, we’re going to be seeing an awful lot of that Sam Worthington/Jonah Hill commercial. Of course, Callofdutymania extends across sports. We learned this back in June when we visited the New York Islanders at their 2011 Draft Party. But while the focus then was on EA’s NHL series, even then players were looking forward to COD:MW3.

So when Dan Imperiale and I returned to the Nassau Coliseum, we knew one thing that would be on their minds.

As soon as we mentioned the game to Kyle Okposo, he piped up, “November 8th!” with some intensity.

“Most of the guys already have the date set in the calendar,” said Isles forward Matt Martin, who wasted no time in talking smack about teammate Blake Comeau (“He’s not very good.”). Martin figured that a few of the guys will “pile into one car and go to GameStop” once the release occurs, but with the Isles having lost in Boston right before the midnight release, one would hope that Beantown’s gamer community didn’t give them a hard time. 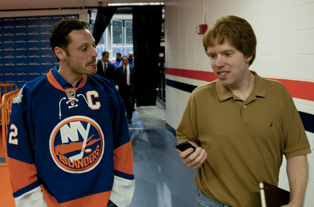 Players talking smack to each other seems to be a common theme. In addition to Martin chirping at Comeau (who left before we could get a response from him), Matt Moulson had some choice words for linemate (and old friend) John Tavares, saying that once he gets MW3, “I’ll probably play a few private games with Johnny to get my confidence up.” Tavares, the first overall pick in the 2009 NHL Entry Draft, was quick to defend himself: “It’s funny when guys like Kyle or [Michael] Grabner are chirping me. I’m not that bad, but they like getting on me.”

2011 first round pick Ryan Strome knows that he’s fallen in with a gamer locker room, and while he didn’t make the big club out of his first NHL training camp (the Islanders returned him to his OHL team in Niagara), he’s ready to step up and take the veterans out in electronic form. “I’ve already gotten a few of their gamer tags,” said Strome. “We get pretty intense in Niagara, and apparently the guys here do, too, so I’m excited!” This week on Twitter the seeds were planted for a shootout with Grabner and Moulson.

For the most part the players seem happy to move away from Treyarch’s Call of Duty: Black Ops. Most players, such as Okposo, admit to preferring MW2. He was pretty specific as to why: “I’ve always liked the Infinity Ward games better than Treyarch’s.” Many other players, including Martin and Strome, expressed similar preferences. Tavares, on the other hand, pointed out that while “the other guys are ready to move on […] I’m not sick of Black Ops yet.”

Not everyone in the locker room identified themselves as a gamer. Mark Eaton admitted to owning an Atari 2600 and an NES when he was younger, but times have changed. Said the veteran defenseman, “I don’t have time for it. I’m married with two kids.” When prompted, Eaton was quick to recall his ideal lineup for Nintendo’s Ice Hockey: “Two skinny guys, a medium guy and a fat guy.” And he also expressed a fondness for Mike Tyson’s Punch-Out.

Sorry, Mark, but once a gamer, always a gamer.

Don thinks he could give Tavares a run for his money in MW3. Challenges accepted via Twitter @UnwinnableDonB.

Eye of the Beerholder – Episode 2: Roll for Initiative
Previous Post