So how was my trip to NYCC 2011? How was my trip? Well, it was kind of like being strapped to the outside of the space shuttle as it orbits the planet. You know, without the hypothermia and rapid asphyxiation due to the deoxygenated atmosphere. So, in other words, really good!

Yes, I know that was two weeks ago. What do you mean I’m late? No, no, all this time I was just creating mystery. Oooooh, spooky editorial journalism mystery!!

When we last left our intrepid costuming heroine, the ensemble had yet to be assembled. Flash to 7 p.m. the night before the Con and I was almost panic-stricken. After going to school, taking the bus home and cooking dinner, I was mere hours away from the Javits Center with a lot of construction to go. I had ordered the pieces that comprised the body of my costume online. All of the details, the pieces that really made Barda who she was, had yet to be completed. I had to spray paint boots red, finish the headpiece and complete the detailing on my gold disco bra. Now, my hand sewing is a bit slow, but I reasoned an extra hour spent there versus an hour spent wrestling with the bobbins and tension of the sewing machine would cause me a lot less stress. I soldiered on slowly and with much accidental stabbing.

Barda’s helmet (headpiece, cranium warmer or whatever you like to call it) is a bit baffling. Drawn by Kirby, her originator, it looks like Harry Osborn’s hair translated into the top of a trashcan. Either that or something from Juggernaut’s new line of ladies’ accessories. Others draw it to resemble the crown of an Egyptian pharaoh; a gold band rings the face and graduates into abstract horns at the top. Based on my limited knowledge of hat making I decided to go with the latter and purchased one-inch-thick foam as my base. I cut my basic shape and covered it in gold fabric. Unfortunately, this simple task involved using orange spray upholstery foam that shot out in a sticky Spidey’s-web jet. The stuff stank, contained acetone that ate at my skin and was impossible to remove. After the first go I learned my lesson. After a 15-minute hand-scrubbing session I employed rubber dishwashing gloves. They still stuck, but were easier to clean than my acetone-irritated hands. Next, I stretched out a midnight blue remnant of charmeuse fabric and cut it into a semicircle. OK, so it wasn’t exactly that easy. When I craft I am very, very much self-taught, which means my conception of how to construct patterns is often lacking. I cut a crude shape out of newspaper (the poor crafter‘s pattern medium), pinned it to the fabric and cut. From there I equidistantly laid out a blue and gold ribbon along the hood to create its stripes. I hand-sewed the ribbon with stitches every few inches to attach them but maximize the use of what time I had left. I was happy enough with the outcome that I turned my foam anchoring piece upside down and quickly stitched it to my hood. The area at which I attached the two was basically the headband and could not be seen from the outside. Magic happens when what you’re making just happens to hide the flaws of your work. O, what sweet relief of my craft-related stress. 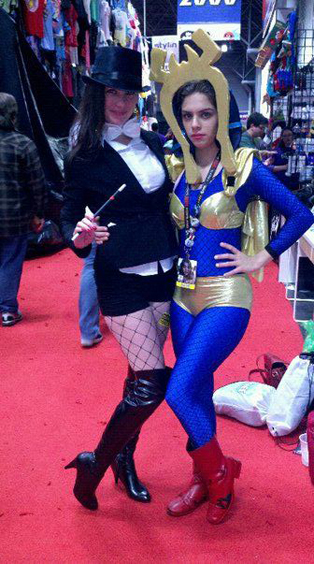 After finding out that my grand petal-shaped appliques on the gold bra looked terrible, I gathered the remainder of my gold fabric and hatched a plan. I cut the fabric in two equal parts, grabbed the center of each and let the rest fall to form a draped column. As midnight approached I sewed these over my mistakes, creating a long draped triangle over each shoulder. It added drama and was an easy fix even if it did mean I was slinging them back into position over my shoulders all the next day, à la Cher and her ’70s hair cape. Finally, at 2 a.m., I did a quick run of the whole outfit and collapsed into bed.

The next morning I ran around frantically, pulling on my spandex and gathering my things. My friend Emily arrived and Zatanna and Barda headed to N.Y. First, we had to stop at our respective banks for some cash and get gas. Reactions ranged from shy to judgmental to shock bordering on fear. I think most assumed we were extra early for Halloween. Traffic was light and we parked at a garage several blocks from the convention center and hoofed it the rest of the way. Even in this bustling metropolis, people seemed surprised at our appearance. Three guys sitting on a stoop asked to take our picture. Consider this situational weirdness: once inside the confines of the convention, nerds relish being asked for a photo op. Outside of one I’d be inclined to think the opportunity might be used to drag me into an alleyway. We declined and proceeded onward.

The light rain and heavy wind made our labored steps seem a Herculean farce as we struggled to walk but were impeded by giant headpieces flopping in the breeze. We were comforted by the sight of some fellow cosplayers as we neared, even though they were just paid to give us shitty fliers. Once inside, we got our lanyards and I stressed to Emily that even though we see flaws in our costumes, people seem to only see the time and effort a person puts in. Not thirty seconds later Batgirl and Catwoman ran up to us and asked for a group shot. AND they actually knew who I was dressed as. That had been my only worry. From there the Con was a blur. We inspected every stall in Artist’s Alley and saw every manner of work: the intricate, the inane, the smutty. At the booth of artist Echo Chernik, whose work blends the worlds of Art Nouveau god Alphonse Mucha and the creatures of H.P. Lovecraft, I suddenly heard a man screaming, “OH HALE NO! BIG BARDA?! OH HALE!” He ran up to me and I was completely taken aback as he and the artist from the next booth fawned over an uncomfortable Amazon warrior for a few moments. Now, I love making costumes and wearing them but as far as I’m concerned the project is what matters, not me being in the spandex. The attention, while sweet, was very strange. It’s par for the course at any decent con but, as I remarked to another artist, it was a lot like being lauded for everything you had been teased for as a kid. In essence that’s what cons are all about and the reason why I think they’ve become so very popular in recent years: people gathering to celebrating a shared love we rarely acknowledge in our everyday lives. We have to remember that as we get older that we are the ones who choose who we are, what we believe in and what we love. Those are the things we need to cherish and share, no matter who disagrees.

I didn’t see any panels or meet anyone who was famous for their looks at Comic Con. I did spend a great day with a friend, meet a plethora of excited nerds and got to talk to Rob Longo of Vixens of Virtue, Vixens of Vice. All in all, it was one of those days in your life when the preparation is warranted by the payoff. To my very nerdy humanist soul it was a life-affirming lesson that there are geeks like me out there. We’re excited and we’re ready to squeeze everything we can take out of this life.