To anyone who’s seen Akira or Evangelion, the idea of Japan building a backup Tokyo is nothing new. It’s even fair to say, after the massive firebombing campaign of WWII, that the current Tokyo is, in fact, Tokyo-2. So it should only come as mildly surprising that Japanese lawmakers have proposed a backup Tokyo (Tokyo-3) to be built and presumably left vacant until disaster strikes.

According to The Telegraph, Japan’s Integrated Resort, Tourism, Business and Backup City (IRTBBC) or the National Emergency Management International City (NEMIC) will root itself on the grounds of the largely defunct Itami Airport in Osaka to the southwest.

Ideally, lawmakers would like to see the IRTBBC/NEMIC fully prepped for around 50,000 refugees of a battered Tokyo-2, with jobs in place for some 200,000 to include residents from the Osaka area. Last I checked there were close to 13 million people living in Tokyo-2, so I’m assuming that lawmakers are banking on massive casualties and planning only to invite boys and girls aged 12-15, since that appears in anime to be the age when individuals realize their destiny and save the world (or at least Tokyo-3).

That all sounds well and good, but the truly important questions still loom large: Will the buildings have the ability to retract underground? Also, what do lawmakers plan to do if an earthquake destroys Neo-Tokyo before Tokyo-2? Check the maps below to see that the proposed site of the IRTBBC/NEMIC is at the southern end of the Nigata-Kobe Tectonic Zone. Among the many large quakes along the NKTZ, you may recall the M7.2 that occurred in Kobe (right next to Osaka!) in 1995. I hope those empty buildings can do more than retract. 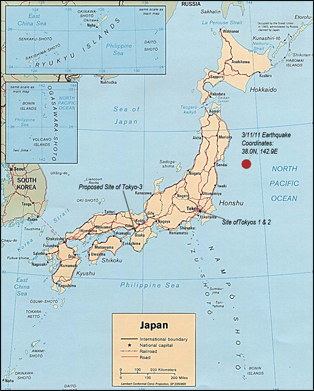 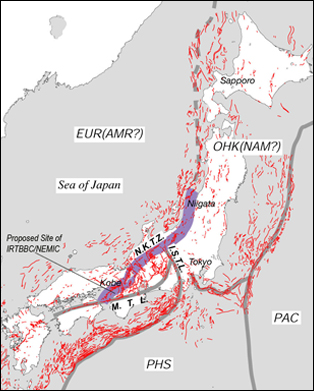