I got in for free – Sunday only – and I hadn’t really read comic books in years. Really, I only went because Dave Gibbons would be signing for the Watchmen movie release. After five hours on the floor, I hopped the ferry back to Weehawken. 2009 was really just the tip.

New York Comic Con 2011 was my first time – my real first time. I bought a three-day pass, waited on ridiculously long queues and spent most of my time tracking down artists and writers to sign my growing collection of comics. I went to the ATM more times than I care to mention. Action figures were purchased, T-shirts were bought, impulse buys flew by in greenback blurs. For a Comic Con virgin, NYCC 2011 was gentle, if not a bit expensive. 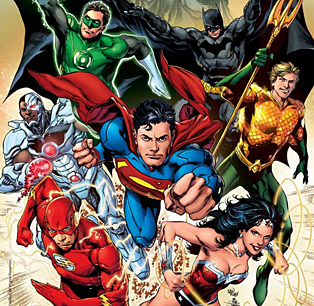 What was it that spurred me to come back? My catalyst was DC Comics New 52. Dan Didio and Co.’s reboot allowed me to step away from the insanity that is 40 years of comic book mythology and start fresh. I started reading comics in the ’90s (Starlog in Ridgewood, anyone?), but quickly lost interest, buried under hundreds of titles that my mother’s wallet couldn’t keep up with (this being the era of Marvel’s failed “2099” experiment and “The Death of Superman”). In the years that followed, I dabbled in the occasional trade paperback, but comics just couldn’t reel me back in. Then DC announced they’d be starting 52 titles from issue #1 and set the hook. Years of backed-up geekery, long dormant, bubbled to the surface. I jumped on the New 52 bandwagon.

Fanboys and die-hards were quick to dismiss it, but as I learned at NYCC last weekend, DC isn’t suffering. Their booth was crawling with people wanting their first printings signed, and I enjoyed waiting in line, chatting with comic book fans, rekindling that nerd gene so deeply repressed. I ignored Marvel entirely, focusing all my efforts on my backpack of DC. Between signings I learned what a “brony” is, got a picture with Tom Morello, sat under a gigantic inflatable Jake from Adventure Time, watched a kid dressed as Link play the new Zelda game (very meta) and saw naughty cosplay pictures after a scantily clad Lara Croft ID’d me.

Next year will be different. One year after DC’s experiment, we’ll see who survived and what will be left of them. I might dive into Marvel again after the schism. Image, IDW, Vertigo and Dark Horse have put up some awesome series (old and new) that I’m foaming at the mouth to read. Is cosplay in the cards for NYCC 2012? Baby steps, Timothy, baby steps; I’m getting back to where I belong.