The show begins with the guttural “huhhuhuh” and “heheheh,” the title card comes up and the all-too-familiar theme song kicks in. Beavis and Butt-Head are back! I’m happy to report that while there are some cosmetic changes, there is also the familiar delivery of laugh-inducing shenanigans and moronic yet insightful criticism from our two favorite cartoon residents of Highland, Texas. 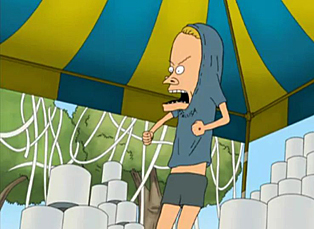 MTV is a very different place from when Beavis and Butt-Head went off the air in 1997. One of the big differences is the fact that music videos are no longer the bread and butter of the network, which was obvious from the commercials that aired before and during this season premiere. Reality TV is the name of the game, as well as teen movies and any other kind of window into the zeitgeist of young Hollywood and show business. In many ways, the guys seem like strangers in a strange land, but then again somebody needs to comment on how strange this land has become.

Beavis and Butt-Head have essentially picked up where they left off in 1997. They’re still sporting AC/DC and Metallica shirts, they’re still in a class taught by Mr. Van Driessen and they still have a couple of cartoon adventures per episode that are interrupted by the all-too-welcome TV watching with commentary. Other supporting characters that popped up in this episode include Coach Buzzcut and Stewart, still proudly rocking his Winger shirt! Sure, the bulk of the episodes are now animated in HD, but much of the video commentary segments still use the same stock animation from the old series, because if it ain’t broke…

In the first segment, entitled “Werewolves of Highland,” the boys are out at the movies watching the latest Twilight debacle. The theater is full of enraptured ladies, so the motivation of Beavis and Butt-Head being there is somewhat implied (probably something to do with trying to score). In one of their more astute observations, they wonder why all the women in the theater are so into this movie. In a classic plot development of Beavis and Butt-Head episodes gone by, they realize that maybe they need to be bitten by something undead so they can get chicks and score. They find a hairy homeless man who passes enough for a werewolf and go from there!

In the meantime, the episode cuts to them watching an MGMT video (focusing on the fire in the video mainly) and a wonderful commentary on the idiocracy of Jersey Shore. This is a new addition to 21st century Beavis and Butt-Head, and it’s fucking hilarious hearing Mike Judge making fun of Snooki and company through his characters (Butt-Head, adopting an Italian accent: “You think she’s a slut. It’s good to know, now let’s get back to making a-pizza”). Sure, it seems like it’s flogging a dead horse, but to be honest, the fact that Beavis and Butt-Head come off as more intelligent than the cast of Jersey Shore is telling, to say the least. 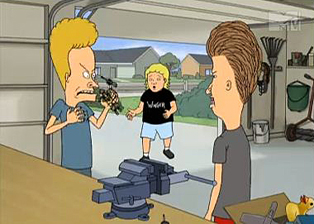 It’s great to have this series back and also big of MTV to finally give Mike Judge top billing in the title screen (it’s now Mike Judge’s Beavis and Butt-Head). Judge has always been a sharp observer of society and pop culture, and now that he has a bunch of shows and movies under his belt, the observations via Beavis and Butt-Head seem even sharper. When Family Guy and Futurama can be resurrected from the grave of cancellation, why not give Beavis and Butt-Head a couple of more rounds? As long as there are things that suck (and these days there are many), there should always be two dumbasses to comment on it.

Beavis and Butt-Head airs Thursdays at 10 p.m. on MTV.