In 2099, mad scientist Walker Sloan (voiced by Val Kilmer) decides to go back in time and create the company he works for, Alchemax, years earlier than its initial founding. Miguel O’Hara, the Spider-Man of 2099 (Christopher Daniel Barnes), overhears this and attempts to stop Sloan. He fails, and this leads to history being rewritten.

Sloan proceeds to employ Doctor Octopus, Anti-Venom and the Black Cat of 2099 to further his goals. Thanks to all the chronal chaos, Spidey 2099 is able to communicate with Peter Parker, the present day’s Friendly Neighborhood Spider-Man (Josh Keaton). Together, they must prevent Peter Parker’s death, restore the timeline and of course, save Mary Jane.

Full disclosure: The last Spider-Man game I played through was Spider-Man for the PlayStation. It was the first time I felt like I was playing as Spider-Man and not a generic Bad Dudes character. Sure, the game had its limitations, but it was for the original PlayStation. I dabbled with Spider-Man 2 for PS2 and while the open world aspect of the game was interesting, it was pretty damn repetitive and didn’t grab me the same way the original did. Unfortunately, Edge of Time never even approaches what was good about either of those games. 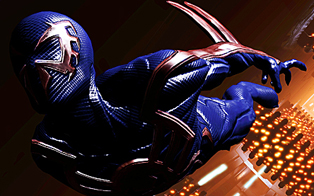 The game has a fun story, but the gameplay just can’t keep up. One of the most iconic images of old web head is of him web-slinging around New York City. That’s a pretty important part of the character, and the same is true of his 2099 counterpart. So it’s only natural to assume that at least one Spider-Man would venture outside the Alchemax building after the game’s first act, right?

Nope. Spider-Man and Spider-Man 2099 both stay in the same building across two different times, making web-slinging a chore at best and frustrating at worst. Most of the time, I would double jump over security guards and use Spidey’s webbing to gunk up their weapons.

On a few levels, players can web-sling in big rooms. That’s pretty disappointing, though, considering that Spidey could web-sling around a sizable part of the city in the PlayStation game.

There are just too many enclosed spaces for a Spider-Man videogame. The developers should have at least given Spidey Batman’s zip line from Arkham Asylum.

Another power that isn’t anywhere near as fun as it should be is wall crawling. Neither Spider-Man wall crawls so much as they crawl through a lot of air vents. The enclosed spaces, combined with the camera, make for some frustrating wall (and vent) crawling. Whenever the camera changes perspective, so do the controls and thus, so does Spider-Man’s direction. I can’t tell you how many times both Spider-Men crawled in circles because the camera switched angles for no apparent reason, other than to let me know that the camera does move in the game.

Edge of Time does have a very bright spot, though. With dialogue written by comic book veteran (and Spider-Man 2099 co-creator) Peter David, the two Spider-Men have a lot of clever banter throughout the game. Keaton and Barnes portray both Spideys with aplomb. Indeed, David, Keaton and Barnes were the only reason I kept going after beating up my 200th security guard.

Want to beat up a bunch of security guards and security drones instead of, oh, I don’t know, actual criminals? Play Spider-Man: Edge of Time. There’s a lot of that going on. In lieu of taking down thugs, Spider-Man (no, two Spider-Men), beat up a bunch of guys who have honest jobs. The security guards at Alchemax probably took the job because it has major medical and dental. They’re just guys doing their jobs, but Spidey’s gotta pummel them.

Spider-Man: Edge of Time feels like a quick cash grab. It’s a new Spider-Man videogame to have on the shelves just in time for the holiday season. It’s like those Jughead digests you see at the supermarket, or Arctic Destro – it’s there because someone will eventually buy it based on its name alone.

Rating: One out of Five Pies
(a word about our ratings)

Ian really likes Spider-Man. Follow him on Twitter @IanGonzales as he catches up on Spider-Island. Spider-Man: Edge of Time, from Activision, is available on PlayStation 3, Wii and Xbox 360.