Last summer, DC Comics released a weekly anthology called Wednesday Comics and I loved every bit of it. Printed on broadsheet like the comics section in the Sunday paper, each page was an installment in a different story by a different all-star creative team. The oversize canvas gave the artists room to put together some eye-popping visuals (Ryan Sook’s Kamandi in the style of Prince Valiant and the bizarre, purple world of Paul Pope’s Strange Adventures stand out to me in particular) and the experience of holding the newspaper was at once something new and something deeply nostalgic.

It was one best new ideas to hit comics in a long while and would have been amazing if it was distributed beyond the local comic shop. DC missed an incredible opportunity to re-introduce their icons the general public at the newsstands.

Now they’ll try to get John Q. Public at the bookstore with the massive and beautiful hardcover collection. While you loose the tactile experience of reading a newspaper (as well as the ease – unless it is parked on the coffee table, the book is pretty damn awkward), you gain the fantastic print quality. 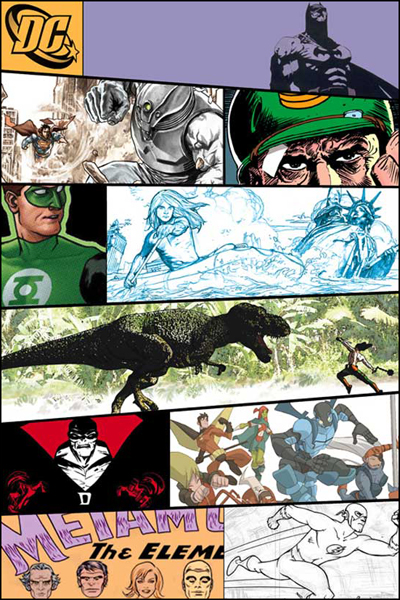 Those who that say comics are a writer’s medium have some pretty serious evidence to the contrary in Wednesday Comics. The original issues were great, but you can print on the best newsprint in the world and your ink is still going to get muddy. In the hardcover collection, fine details, like the tiny panels in Ben Caldwell’s Wonder Woman, open up and become something inviting instead of being a puzzle to decipher. The art work is staggeringly crisp and vivid, making Wednesday Comics well worth the investment, even if it is the second time around.

(Full disclosure: Unlike most of my videogames, I paid real American dollars for my copy of the Wednesday Comics hardcover collection, so when I say its that awesome, it really is that awesome.)

In Other Comic News