Top Cow’s “Pilot Season” has returned and so has Echoes scribe Joshua Hale Fialkov. His latest incarnation, The Test, has the same peculiar feel that Echoes did, but The Test eschews the violence (for now).

The story seems more concerned with building a Lost-type mystery that deals with a series of enigmatic characters thrown together in a situation that asks them to repopulate the earth, all while living beneath a glass containment dome. It is this creepy feel that makes The Test a great read and the beginning of a pretty interesting series. 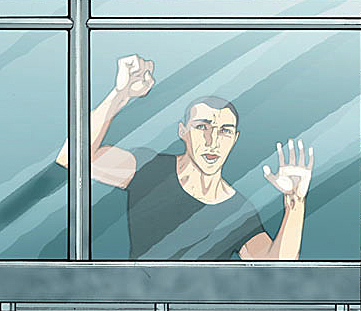 The nice thing about The Test is that we’re as clueless as the characters. They all have amnesia and wake up to find they are trapped with ten other people, in a dome, under the watchful eye of a computerized guide who seems to be hiding a not-so-secret insanity (if she’s even real). The issue ends with the main character, a man who thinks his name is David, staring up in the empty, but watchful gaze of his captor.

Additionally, this man who may or may not be a doctor comes across a rotting – but still very alive – body of a woman, covered in maggots. At first I thought zombies, but in a recent interview Fialkov said the story is “survival horror” – it doesn’t deal with the wolfman, zombies, vampires or Frankenstein’s monster. For me, this makes the story even creepier. Zombies seem like the easy out, but the author himself acknowledges that there are none.

So the next question becomes who would want to let a person rot, be eaten by maggots and left as a calling card for a group of ten strangers trapped under a survival dome?

Since this book is part of Top Cow’s pilot season, it has to win before it’s made into an ongoing series. So is there enough here to make it a continuously interesting read? Definitely, yes.

The Test has a feeling of dread hanging over it. Being trapped is scary. Being trapped with strangers and robbed of your memories and thrown into a questionable living space is friggin’ terrifying.

I would very much like to see The Test win so I can find out more about what happens to the characters. What’s beyond the dome? What’s up with the crazy-eyed watcher chick? What’s with the rotting body? Much like Lost, The Test could keep fans invested with the doling out of – and solution to – rich, intriguing mysteries. But if this series ends with them in some non-denominational purgatory, I’ll be spitting fire.

Read The Test. Make it the next big thing over at Top Cow. 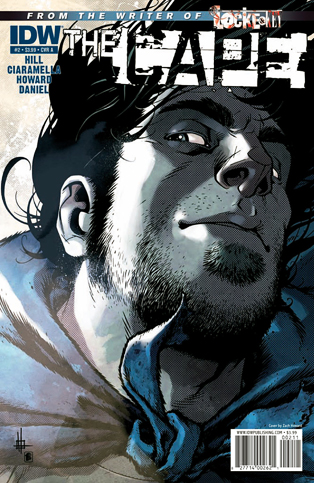 For those of you unfamiliar with The Cape, it’s a story about a man who suddenly has the ability to fly, and much like every villain in comics, he chooses to use his power for bad. The Cape has all the elements of a good action story – violence, swearing, a badass villain and bricks being thrown into people’s faces.

Eric has typical jealous-brother syndrome. He’s angry that his brother Nicky is such an academic superstar (he goes to Harvard and becomes a very successful something or other). While the first issue deals with this conflict pretty well, the second issue doesn’t have the same logic. I think what really bothers me is that Eric attacks his own mother, and I can’t figure out why.

A lot of this book is predicated upon the idea that Eric is just a “bad guy,” but there has to be a reason for the bad guy’s badness. In any superhero story, the villain is defined in opposition to the hero. Think of the major villains in comics. Lex Luthor? The opposite of Superman. The Joker? The antithesis of Batman? Spider-Man’s villains? People who have been given great power but lack the responsibility that comes with it. Eric? He’s just a jealous brother.

For me, that’s not enough.

So what’s to like about The Cape? Zach Howard’s art, for one. His pencils, coupled with Nelson Daniel’s inks and colors, make for a visually engaging read. Howard packs on the grit when he needs to (and most of the issue is grit) but also deftly conveys emotions.

The Cape has a dark story. And it isn’t a bad story. But it doesn’t offer much to readers besides “What happens when a bad guy is given bad powers?” We’ve seen this before.

I also think the problem with The Cape is that it lacks any sense. There’s one scene in particular where Eric floats above a squadron of police officers. As he flies away, a brick smashes into the face of a police officer. Why? I don’t know.

Kick-Ass is violent, but there’s logic to that kind of violence. The Cape has no logic. The premise is that a dickhead kid gets powers and continues to act like a dickhead kid. There’s not much more than that.

This is what makes The Cape such a cryptic and inconsistent read. 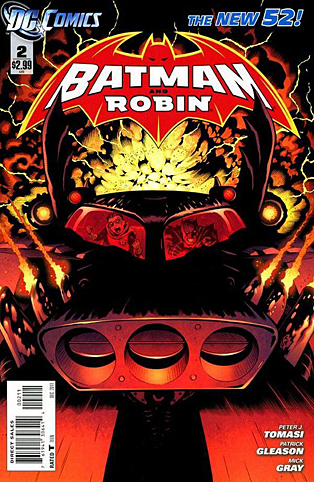 Bannen’s Book of the Week: I bought this comic because of the cover. Damian looks absolutely thrilled to be riding shotgun with Batman as they tear-ass away from some sort of massive explosion. Batman and Robin succeeds, but not in its action; the story has a lot of heart and finds a greater role for one of the best characters in comics: Alfred.

The issue deals mostly with Bruce and Damian, and shows a confused Bruce Wayne looking for ways to connect to his (trained killer) son, Damian. Much like the Nolan Batman series, Alfred plays a greater role as a mentor and a guide for Bruce. Peter Tomasi does a phenomenal job of creating a realistic and heartfelt conversation between Bruce and the man who raised him like a father.

Much of the issue relies on dialogue, but the dialogue is balanced and effective. At no point did I feel weighed down by the words. In fact, I loved reading the interactions between Bruce and Damian and Bruce and Alfred (99 percent of the issue is concerned with these).

More important, Damian is nuts. I was lukewarm to the idea of Bruce having a son, but Damian has become an indispensable member of the Batman cast. And in this issue, Damian snatches a bat out of the air, crushes it in his hand, then examines the carcass for a few seconds before tossing it into the vast caverns of the Batcave.

Tonally, it’s a terrifying scene, and it helps to create more of a tension between Bruce’s attempts at “humanizing” Damian and his conflict with his upbringing. The story is classic nature versus nurture, yet I feel that nature will win.

Damian is dangerous. And Peter Tomasi knows how to make him a powder keg.

A great story and great art equal a great comic. When Batman and Robin was restarted, I didn’t see how DC was going to make the story a more creative read. Clearly, Tomasi is trying – very hard – to make it a serious conflict. The Batman doesn’t kill. But what happens when his son is raised by a woman who taught him that human life is meaningless?

That, friends, is the real heart of Batman and Robin, and it’s the reason you should be reading this comic.

Batman and Robin, New 52, The Cape, The Test