This past April, a small-budget independent vampire film was released in a (very) limited number of theaters and was quietly ushered off to the land of DVD and Blu-ray.

Like many independent films, Stake Land snuck in under the radar and many of you may have missed it (I certainly did). Luckily, I happened upon a short magazine article recently, immediately watched the film and I’m here now, Dear Reader, to share the joy with you.

New York-based production company Glass Eye Pix and director Jim Mickle have blessed horror fans with something we just don’t get much of anymore: a damn good horror movie.

The plot follows vampire killer “Mister” (played by Nick Damici) and his younger companion, Martin (Connor Paolo). Mister rescues Martin as his family is being killed by vampires, and the two assume the inevitable master/apprentice roles forced on them by circumstance. It’s Martin’s solemn voice-over that guides us through parts of their journey.

The United States has been decimated by a vampire plague that reduces its victims to raging wild animals – all traces of humanity are gone and the vampires exist only as (really cool) killing machines.

During their travels, Mister and Martin are also joined by pregnant Belle (Halloween 4 and 5’s Danielle Harris) and post-rape nun “Sister” (played by Kelly McGillis, who bears quite a strong resemblance to Lee Marvin in the film).

For die-hard practical effects fans (like myself), the vampire makeup design is outstanding, featuring an abundance of top-notch prosthetics, fangs, blood and gore. And while some shots are particularly gruesome (as you’ll see in the opening barn scene), nothing feels gratuitous – everything in the film is just right. 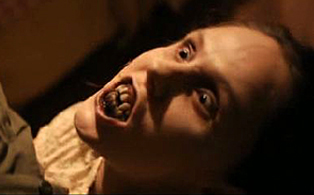 For a horror movie about brutal, animalistic vampires, Stake Land is surprisingly elegant. The lighting and colors in every scene are extraordinary and from a cinematically visual perspective, the film is simply beautiful to watch. Further, director Mickle’s blend of characterization, horror and action is near perfect, with no one element overriding or washing out the others.