Described as “kinetic chess” by UFC legend Randy Couture, the sport of mixed martial arts galvanizes all different styles of unarmed fighting into one cohesive sport. These styles range from stand-up disciplines, such as boxing and Muay Thai, to ground disciplines like wrestling and Brazilian Jiu Jitsu.

Combining all of these diverse and unique styles into one game that does each style justice must be incredibly hard. It’s hard enough to design a great boxing game, so to also be able to incorporate an entire wrestling game and to perform the task with every discipline seamlessly integrated must be exceedingly difficult.

Nonetheless, Supremacy MMA attempts a novel approach to this feat. The game is similar to a typical ’90s-style fighting game. Oh, the ’90s, a time before first-person shooters ruled the market; a simpler time when 2D fighting games were all the craze. The same Golden Age in gaming that brought us Shaq Fu and Eternal Champions. And though it does have a third dimension, Supremacy MMA is roughly on par with these titles.

I kind of laughed to myself and thought that since the game has no announcers, I’m surprised the developers didn’t go with an old-fashioned synthesized voice that says a barely discernible FIGHT to start off each bout.

The story mode is comprised of moving still shots with minimal voice-over. Every fighter’s backstory seems to be made up of the same formulaic “double tragedy,” leading into a “this is why I fight” story arc. It’s almost as if the game is steeped in the same mindset of those people who view the sport as barbaric.

The stereotypical fighters of Supremacy seem to have no other choice but to fight, although, in reality, there are many professional fighters who are college-educated and fairly intelligent and love the sport for the purity of its competition. This game just brands them as stereotypical pit fighters who fight in prisons, seedy underground fight clubs and sets from random NIN videos.

After becoming frustrated with the story mode, I changed things up, played the Femme Fatales mode and got excited about doing some ass-kicking. The first thing I noticed was that my choices for female fighters were limited to two. OK, I thought – maybe I’ll

just unlock more as I go through. So I fought a match and I won. All right. That’s awesome. I was getting ready for my second fight, and it was a rematch with the same opponent. I made short work of her again and…. that’s it. Story mode was over.

I was shocked that they even included Femme Fatales in the menu. Worse than that, the game doesn’t allow you to pit a female fighter against a male fighter. I mean, even Chun-Li has equal opportunity to fight whomever she likes. I bet in real life that Cristiane “Cyborg” Santos, the current Strikeforce women’s featherweight champ, would easily destroy any of the fighters in this game. 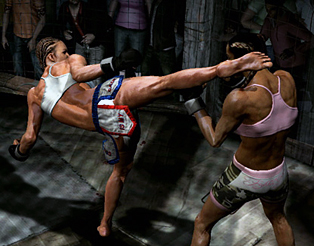 So besides all my subjective griping on the essential lameness and lack of story in the title, there is one large problem with the game: collision. It is the making or breaking point of any fighting game, but Supremacy MMA, instead of creating awesome collision effects and simulating real brutality, opts to use an artificial sweetener and simply jostles the screen. Every single punch, kick or hit moves the screen left and right, shaking it with epileptic fervor, which is probably something the game’s publisher will learn about once the seizure lawsuits start rolling in.

Although Supremacy MMA does have an extra dimension over ’90s-style 2D fighters, it proves to actually have less depth. In fact, I probably would have preferred to have been a Judo-chopping robot.

Rating: One out of Five Pies
(a word about our ratings)

I’d rather be playing Eternal Champions @GeorgeCollazo. Supremacy MMA, from Kung Fu Factory, is available for the Xbox 360 and PS3.