It’s hard to believe that the Super Nintendo Entertainment System (aka the SNES) turned 20 years old last week. While I was a dedicated O.G. Nintendo player initially, I admit to having traded in most of my games to FuncoLand when the new system hit the scene (more on that in a second). I spent the better part of the ‘90s playing SNES and Genesis, but the majority of fond (and not so fond) memories are for the SNES. It was the superior of the two systems technologically, sometimes knocking it out of the park and into the stratosphere, thought other times failing abysmally. These are my memories. 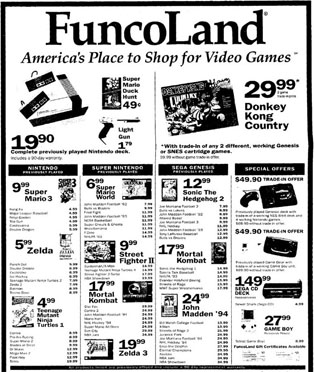 1. Trading All of My NES Games to FuncoLand: For the younger readers out there, FuncoLand was the first major videogame chain store in Bergen County (where I grew up). You could trade in old game systems and cartridges for new ones. When the SNES hit the scene, kids far and wide basically dumped their NES games into the FuncoLand inventory.

I remember going with my dad and waiting on line forever as the kids in front of me were getting ripped off royally for the first (and definitely not last) time of their lives. To waste away the time on this bread line there was a FuncoLand catalog you could peruse, and it had a listing for every NES game at the time and how much it was worth. I started my SNES collection there, acquiring Contra III and Final Fight for the 25 NES games I traded in (they didn’t accept my banged-up NES console).

Over the next 20 years, many different stores would rise up, and then fold or be bought by GameStop. FuncoLand was one of those stores that was swallowed up, and now GameStop is doing all of the ripping off these days. It’s amazing because my dad (and probably many other parents 20 years ago) was saying that this business model was an opportunistic racket created to fleece kids, and most likely wouldn’t last. Let the good times roll!

2. Choosing Poorly: Since new SNES games usually cost about $60-$65 a pop, there were often serious droughts where I had to make games last. After a year or so on the market the toy stores in the area started to throw a few bones out there, but they were often bones made of shit. I guess I still had much to learn after my Friday the 13th and Wrath of the Black Manta purchasing disasters with the NES: that sometimes choosing wisely will 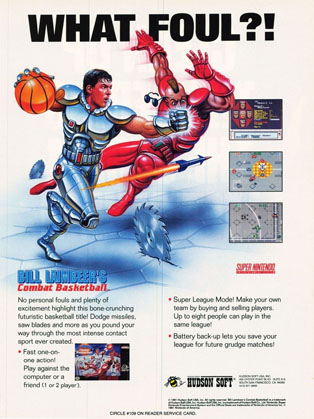 lead to a game that will be fun for a year, as opposed to a game for $20-$30 that’s groan-inducing within an hour. My two biggest cheapo mistakes were Bill Laimbeer’s Combat Basketball and Final Fantasy Mystic Quest.

The first was a combination of Smash TV and Double Dribble, except with horrible gameplay and rules that somehow complicated the simple concept of basketball and explosions to a ridiculous degree.

3. Soundtrack Awesomeness: One major plus to the SNES was that it had a superior sound card to the Genesis, so if the game designers actually gave a shit, they could throw a kickass score behind their games. Two of my all-time favorite soundtracks are the F-Zero and Donkey Kong Country soundtracks. Decades later, parts of those infectious scores will still pop up in my brain, especially the mine shaft level from DKC and the score from the Port Town racetrack in F-Zero.

4. Accepting the Suckiness of Pilotwings: I admit to logging many hours with this game, as it was one of the first three games released for the SNES and one of the early entries in my SNES game collection that was pretty simple to learn. A tech demo for the system, Pilotwings showed off the much-ballyhooed Mode 7 graphics engine that Nintendo was so proud of. Essentially a scaling effect that could recreate the appearance of spiraling downward (like from the heavens to the earth), Nintendo utilized Mode 7 all over Pilotwings, and even in F-Zero and Super Mario World (it’s also used in the Enix classic ActRaiser). Looking at the effect now is funny because it essentially causes the gameplayer to come crashing down into a field of blurry pixelation, and crashing in the most horrible way is what most Pilotwings players did who were bored with waiting for their parachute dude to slowly and accurately touch down onto a field. Many a brave SNES extreme sports avatar was killed intentionally by people playing Pilotwings. The bonus level where you drop bombs all over the island was pretty cool, though.

5. Playing Super Metroid While on Summer Vacation: My parents used to be fond of taking vacations down in Long Beach Island, New Jersey in the ‘90s, oftentimes sharing a house rental with other extended family members. One year, on the first night there, I was playing basketball with my cousins while wearing flip flops, which is a dumb, dumb idea. One attempted layup 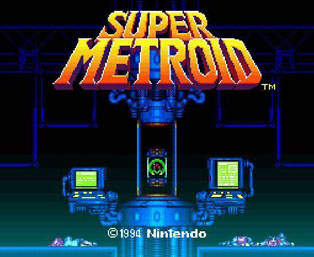 and a sprained ankle later and I was spending the rest of that week in the living room of the beach house playing Super Metroid. Thank the gods that the SNES console was compact enough to pack, because I would have probably gone nuts that week if I hadn’t thought of bringing it in my duffle bag. Even though I spent little time on the beach, it was rewarding when my one cousin saw how far I was getting and eventually didn’t want to go out to the beach either, which led to the two of us getting to Mother Brain and beating her. That summer week was a shoreside Nintendo Fun Club for recluses.

6. The Super Scope 6: One of the most ridiculous light guns ever, the Super Scope 6 was a giant bazooka thing that worked with maybe 2 or 3 games. I guess Nintendo wanted to change things up from the practical and awesome design of the NES Zapper and went with this monstrosity. A childhood friend of mine had it, and I remember there being a game that came with it where one level was basically Whack-A-Mole with the Super Scope. I assume many Super Scopes were quickly banished to the house storage area purgatory to live out the rest of their days with R.O.B. and the Power Glove.

7. Epic Conquests: Two games I am most proud of beating are The Legend of Zelda: A Link to the Past (the greatest Zelda game, in my opinion) and The Secret of Mana. Both were more on the RPG/adventure tip, while also being action-packed and engrossing. There have been few endings of games that I have loved more since beating either of those, and none since have ever had the feeling that one gets when completing an epic novel. Endings that are actually rewarding for the hours punched in – what a concept!

8. Touching Fuzzy, and Getting Dizzy: It’s a level in Super Mario World 2: Yoshi’s Island. A pretty bizarre game to begin with, featuring Baby Mario being hauled around by a stern but sensible Yoshi, this psychedelic level focuses on these spiky floaty guys that when touched would cause Yoshi to hallucinate. I was 15 when this came out, so it was quite a joy to be playing a Nintendo game that catered to my age level.

Unlike many NES consoles there are still a number of working SNES consoles out there, including my own. After writing this, I think I will dig it out of the box it’s in from my last move and take it for a spin. Thanks for the memories and happy belated birthday, Super Nintendo!