When I interviewed John Carmack at E3 2011, I was immediately impressed by the ease with which he spoke, rapidly but intelligently, about all manner of complex programming conundrums. Considering this was one of the brains behind id Software and its classic games like Doom, Quake and the forthcoming Rage (not to mention my personal fave, Commander Keen), this should come as no surprise.

I went in with a list of fifteen questions, but barely had the chance to ask five, though he managed to answer all of them over the course of a staggering 4,000+ words. The one I found most interesting was, unfortunately, one I had to cut. The one about the rockets.

Since 2000, Carmack’s rocketry hobby has taken the form of Armadillo Aerospace, a startup based in Mesquite, Texas, founded with the goal of building a manned suborbital spacecraft as well as one capable of actual orbital spaceflight. That’s some hobby:

“Historically, over the past ten years, I’ve taken half of Tuesday and all of Saturday to be working on the rocket projects. It has grown – we have eight full-time employees in a big hangar and it has been a little bit sad for me to let it get beyond my direct control. It was always the most fun for a long time when I was the chief CNC milling guy, I was the guy who wrote the G-code and I would cut the injectors and all of that. Now, the full-time guys do that and a year has gone by without me writing code for the mill.

“That saddens me, but I didn’t want to hold the project back to the limit of what I could contribute. It’s kind of funny how it worked out – after id Software got acquired by ZeniMax Media, people thought since I wasn’t the executive I’d have more time to pursue my own tasks, but it has worked out the opposite. I want to make sure that ZeniMax gets the value for their acquisition, that they don’t feel that they were sold a bill of goods or something.

“But the team is going out this week [the first week of June] to White Sands Missile Range to fly one of the vehicles on the NASA contract. We legitimized the company when we started doing contract work for NASA. We were flying people with the Rocket Racing League for the better part of eight years and it was this quirky hobby of mine that I did outside of the game development, but we got to the point where we had an operating profit one year. The contract was a marginal thing, though, and in the last year, I said, ‘Stop chasing contracts! We need to fly these vehicles at altitude!’

“I’m so afraid of the trap that so many potentially innovative little companies get in, especially when you are in the government sphere of influence. It is bizarre. People come from the consumer side of things, where everything is all about satisfying the need and delivering value and cost effectiveness, but with the

government you get a contract because they think it’s your turn to get a contract and because somebody wants to get something out of you. But none of them build the things. I know of companies that have been doing the government contracts thing for 20 years and they didn’t make any progress towards what they wanted to do.

“It was nice to get multi-hundred-thousand dollar checks that almost covered our expenses, but it wasn’t getting us where we need to go. So the orders now are to build the rockets, crash them as much as necessary, get it done and get it up there, because when we finally reach the end goal, that’s where the real market is going to be. I don’t want to be stuck in some low trough here. We can keep our heads above water doing contracts for NASA, the air force and DARPA, but we want to be up there with a product and say, ‘OK, it is on the shelf. We fly to space every week. Come bring your payload or hop on board.’

“I’m probably going to throw another million dollars of my personal money at the project before it winds up getting to that point where it can actually break out. I may have had an operating profit one year but everybody still says I’ll never make my money back. I want to show people that its possible to open up new doors but, in the end, business is important. Someone that just goes off on a personal crusade, it’s going to live or die with their interest. When something gets to the point where it is economically meaningful – you may be the pioneer with all the arrows in your back, but if you really want to change something and make something important happen, then you need to go do it.

“And if the gold rush happens after you, well, you have still accomplished what was really important to you.” 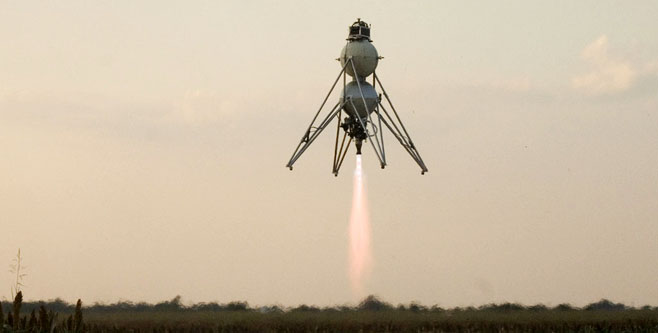