Those of you who grew up playing videogames in the mid-to-late ’80s might be familiar with the literary oeuvre of author Jeff Rovin. His How to Win at Nintendo Games books were pretty common at one time, the sort of thing you’d see at K-Mart alongside novelizations of Castlevania 2. They were cheap paperback books that covered forgettable NES games like Amagon and City Connection. Each chapter focused on a single game and provided a brief walkthrough and a review of the game, which was usually pretty charitable. If I recall correctly, he may have even given high marks to the infamous Deadly Towers. Anyway, the most notable thing about these publications is that they are all text. No screenshots, no maps – nothing. Just prose, and lots of it. 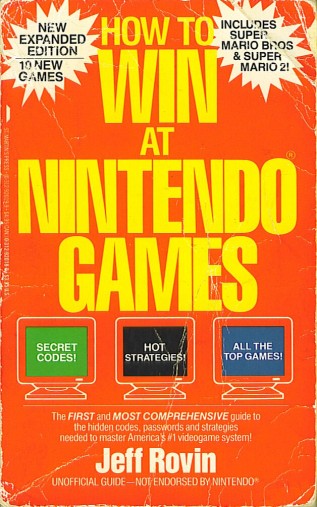 I figured he only was able to get away with this in the early days of 8-bit gaming, when there weren’t that many full color magazines dedicated to videogames, but a search on Amazon revealed that he actually wrote a book titled How to Win at Super Nintendo Games, published in 1992! I really had no choice but to order it – after all, August 2011 marks Super Nintendo’s 20th birthday! This book is actually a highly appropriate reference for a nostalgia piece about Super Nintendo, as it focuses on the first wave of SNES offerings, a robust batch of games that included ActRaiser, F-Zero, U.N. Squadron, Castlevania IV and of course A Link To The Past and Super Mario World. That first year of SNES releases was pretty solid!

Then again, there were some utterly forgettable games from that era, like a crappy cash-in based on Home Alone and also Ultraman, a lackluster fighting game based on a property most American kids hadn’t even heard of. Those games get decent coverage here as well! But no game is covered as thoroughly as Super Mario World, with a chapter that sprawls 50 pages of text! How is this even possible? For comparison, A Link To The Past only gets eight pages.

When it comes to walkthroughs and game guides, a picture is worth several thousand paragraphs of “Go down, right, up after the columns, right, up, left, up, right, and up: open another Treasure Chest here for 100 Gold” (from the chapter on Lagoon). At times, Rovin’s sentences sound like excerpts from a bizarre Zen koan: “Go ahead in the room where the lights come and go”; “Leap the ledges, avoiding the various specters trying to kill you”; “There’s roast beef over that trap door.” But what are you gonna do? I can’t imagine trying to write about the rinse-and-repeat process of playing a typical 2D platformer or space shooter. Sometimes even Rovin has to throw up his hands. At one point in his chapter on the mindless street brawler Final Fight, he comes right out and writes, “No special tactics here: either you’ve got the strength to beat ‘em or you haven’t.” For the horizontal-scrolling shooter Darius Twin he advises players to “Stay to the far left, sweeping up and down

and shooting away,” which is pretty much the only tactical advice you could ever offer someone who’s playing a horizontal-scrolling shooter (and yet he manages to elaborate on this for five pages!).

Rovin certainly believed in structure! Each game’s chapter is broken down into eight sections: Type (and within this category there seems to be a limited range of classifications – Castlevania IV is a “Monster shoot-’em up”); Objective; Heroes; Enemies (for Hal’s Hole-in-One Golf he mentions “terrain and wind”); Menu (seriously? Who gives a shit?); Scoring; Strategies (generally this is a walkthrough of at least the first few levels of the game) and a ratings section with letter grades for Challenge, Graphics, Sound Effects and Simulation (Super Mario World nets an “A” here, and Rovin claims you will “feel like you’re doing everything Mario’s doing, especially swimming”).

But as anal as he might’ve seemed, Rovin could still kick up his heels and indulge in some fanciful prose on occasion. The villain in ActRaiser apparently chased away a benevolent deity in the game’s backstory, thus “enabling wickedness to girdle the globe.” Elsewhere, Rovin boldly asserts that the vehicles in F-Zero “can do everything but recite poetry.” He also indulges in obscure references: somewhere deep in that Super Mario World chapter, Koopa shells are said to resemble long-dead comedian Ernie Kovacs (what?), and he compares one of the enemies in Drakkhen to the id monster in the 1956 film Forbidden Planet. That’s giving your readership a lot of credit, Jeff!

…the most notable thing about these publications is that they are all text. No screenshots, no maps – nothing. Just prose, and lots of it.

Quixotically, Rovin also gives the people who write game manuals a great deal of credit, and he shakes his finger at game publisher Asmik for sloppy editing in the manual for an obscure top-down shooter called D-Force:

“A word to Asmik: there are lots of typos in the instruction booklet – ulimate, dinasaurs, loosing instead of losing, etc. One reader, Chris Kern, took us to task for criticizing game manufacturers for typos while we make some ourselves in our books. That’s true. Out of 60,000 words, we blow one or two. We try not to, but it happens. Unfortunately, too many game companies don’t even make the effort. To miss three or more words out of a few hundred simply isn’t acceptable. It’s unprofessional and it gives ammunition to antivideogame factions that feel the games are bad for us!”

Enjoy that new asshole, Chris Kern! That’s what you get for writing a bitchy letter to the good folks behind the How to Win at Nintendo Games book series. But if it makes you feel any better, know that Rovin et al. were hopelessly misguided – the most exquisitely well-written manual wouldn’t have thrown the “antivideogame factions” off the scent of the forthcoming Mortal Kombat.

I suppose you could argue that Rovin was sort of a trailblazer. In the usenet era and beyond, many FAQs and walkthroughs for RPGs and other complex games have taken the form of plain text files, with the occasional ASCII map. But I highly doubt that any of the walkthrough authors who’ve come since are quite as thorough as Rovin. In his section on the “Ruins” level of Super R-Type, Rovin helpfully tells us that “if you watch this level through red and green 3-D glasses, the objects really pop off the Ruins background.” I was almost going to bust on Rovin for being bored enough to try such a thing, but then I realized that I’m probably in no position to criticize, having just read and reviewed a book about Super Nintendo games from 19 years ago. Here’s to idiotic endeavors!

Rise of the Existential Crisis: How One Woman Nearly Never Finished a Book Review