You may never find a more wretched hive of scum and villainy than Mos Eisley spaceport, but San Diego Comic-Con must run a close second.

Sure, if you’re a die-hard fan of anything remotely geeky, there’s nothing as exciting as spending four days moving from one line to another to see two minutes of exclusive footage from a movie coming out next summer that will be leaked on the Internet ten minutes later or to get an autograph from the guy who once lettered an issue of Nick Fury and the Howling Commandos in the ’70s. If you love comics, anime, sci-fi blockbusters, zombies, vampires that look like Robert Pattinson but don’t actually do any biting, robots, Cowboys and/or Aliens, ironic pop culture T-shirts and college-age women in inappropriately tight costumes, then this is the center of the universe.

But trying to cover the event as a journalist is something else entirely – sometimes all the fun is squeezed out by uncooperative publicists, ridiculously scheduled events that completely overlap and roundtables overcrowded with reporters who ask even dumber questions than mine. What follows is my diary from my San Diego Comic-Con 2011 misadventures. Read on if you dare…

By 10 a.m. on Thursday, my first full day, I’ve found myself on three lines – starting with one ridiculously long one for a Starbucks coffee, an hour and a half one for my press badge – the third time’s the charm, though, as I line up with my ticket to a very special screening of Captain America: The First Avenger at a local multiplex a few blocks from the convention center. It’s a day before the movie hits theaters across the country and Chris Evans is here to introduce the film.

To go, I had to blow off a Twilight press conference, which somehow gives the event a whole extra level of awesome.

After the young ladies of the San Diego State Dance Team, decked out in their star-spangled USO dresses, do their obligatory Forties-style dance, Chris Evans runs down the aisle flanked by bouncers that look like super soldiers. Seeing so many fans going nuts over

his presence, Evans looks nervous and in desperate need of his shield. 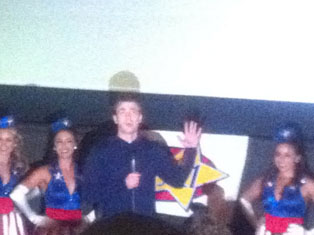 “I love this movie,” he says. “I really think we’ve got something special here. It’s everything a superhero movie should be.” Then adding bizarrely, “I don’t always like my movies.”

I sure like this one, and by the end with the – spoiler alert – teaser trailer for next year’s Avengers, I find myself as pumped up as the whooping psychopaths sitting next to me. Well, maybe not the 40-something-year-old in the inappropriately tight spandex Captain America costume who hit on the USO girls half his age earlier.

The afternoon is a lot less enjoyable – marked by a succession of short press conferences for Fox’s In Time with Justin Timberlake, Prometheus with Charlize Theron and Rise of the Planet of the Apes with Andy Serkis.

Originally, I was supposed to interview Timberlake one-on-one for a New York Daily News article, but over the previous few days it imploded in one of the first of many disappointments I had over the weekend. By the press conference, I got exactly one question in.

And as he answered, all I could think about is that I couldn’t tell who was prettier, him or co-star Amanda Seyfried.

Where in the World is Carmen? San Diego! Day 3