Something happened the other day that reminded me, yet again, that I have to make some serious changes in my life.

It wasn’t anything grave or near-fatal or anything like that, thank God, but it was enough to drive home the point that I need to shape up – now.

It seems to go against everything this column stands for – or sits on the couch hour after hour for – but in the spirit of “The Rookie of the Year” I’ve decided to turn my weight loss into a game, with countless hours of playing time and boss levels that take place in Italian restaurants, summer barbecues and my very own kitchen.

It may not be “next-gen” but it’s not exactly old-school either. I carry around a newfangled gaming device called an iPhone everywhere I go, after all, and it’s packed with location-based social networking/videogame hybrids like Foursquare and TapCity, in which I now “own” Yankee Stadium and tend to it like a farm whenever I’m in the Bronx.

I’ve decided to take one such app, called Lose It!, and see if it can help me turn my life around. Or at least turn me from a bulging offensive lineman into a slightly sleeker offensive lineman. 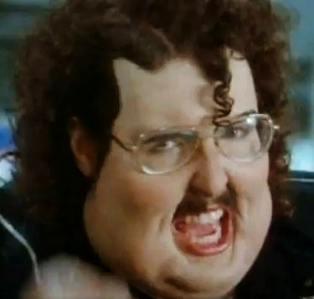 Lose It!, which I reviewed many moons ago for the New York Daily News, helps you keep a running tab on your caloric intake, setting daily and weekly goals based on your starting weight (I’d give you mine, but Unwinnable has me on a strict character count). Every time you ingest something, you add it using their sizable database or your own customizations, and it lets you know how much more food you can stuff your face with for the rest of the day before you’ve gone

and started acting like a pig again, you worthless
tub of lard.

It also tracks fat, carbs and all that good stuff, generates email reports and Excel spreadsheets and probably has a bunch of other features I’ll never use.

I’ve dabbled in it once before and it worked, keeping me honest and grounded. But now I’ve added my own feature I think makes it even better:

I’ve accepted it as a daily challenge to stay under my limits, and instead of looking at it as a “diet,” I’m thinking of it as a set of achievements to unlock.

Now if you came here, like you do every other Monday, expecting to hear me opine on my Xbox, don’t despair. I credit one particular Xbox game – Fable 2 – as the source of my inspiration.

Here’s a game where you choose tasks – good and evil, noble and selfish – and make choices that affect everything from your renown to your rugged good looks.

It may take some effort to become a master blacksmith or a champion woodchopper – let’s face it, it can become a chore after awhile – but the money you earn starts to add up, and soon you own a nice house and the local tavern and can afford slick new clothes and a stylish haircut. You can even lose unneeded weight by eschewing pies and other treats that replenish your health but double your gut. And if you can manage to keep from falling in battle, you’ll avoid getting scarred for life.

The better you are – the richer, the handsomer, the purer – the more the ladies in town swoon when you walk by, and the more they lament the lack of a ring on their finger.

Even the men crush on you.

At first it was a thrill. I loved being treated like a rock star, even if it was only through my avatar.

But it wasn’t long before I began asking myself, why am I dedicating more time to finding and impressing a virtual wife than I am to making myself attractive to the opposite sex in the real world?

The answer is simple: In Fable 2, it’s easy and fun.

Matt Marrone bought himself a wifi-enabled scale that talks to your smartphone and can even post your weigh-ins directly to Twitter. As soon as he works up the nerve, you’ll be able to follow his progress @thebigm.