Dan Slott is to Spider-Man what Geoff Johns is to Green Lantern. He writes incredibly epic stories, balances both character and plot and ends his issues with grand climaxes. Plus, this is a situation where Slott has crafted a lengthy, intertwined plot, so if readers haven’t been following the series, they’ll be lost. But those readers who have—well, we’re getting some rewards for our patience.


A long while ago, Slott introduced Mr. Negative and Anti-Venom, as well as updating characters like Mysterio, Dr. Octopus, Rhino, Sandman, Electro, and Shocker. Plus, he gave Spidey a new girlfriend, married Aunt May to J. Jonah Jameson’s father and killed Jonah Jr.’s wife—the last of which serves as the focus of the current story arc.

All of these pieces are crashing together and leading to “Spider-Island,” a series which is reported to be about all of New York City (heroes and villains included) getting spider powers (including “spider-sense”—the one ability Spider-Man has lost) and his attempts to deal with that. These are grand plans, but ones I feel confident Slott can pull off.

The cover of the issue is a bit misleading as The Wraith only appears in a few pages. This issue is mostly about Brock and Peter, once again trying to resolve their differences. This time, however, Eddie’s right. For fans following the series, this is a battle long in the making. And since we’re still two issues away from “Spider-Island,” it’s a conflict that won’t be

resolved immediately. But when it is? I, for one, look forward to seeing what Peter does when he realizes that the man he views as a saint, humanitarian and philanthropist is actually a supervillain.

The shit is going to bathe the fan. 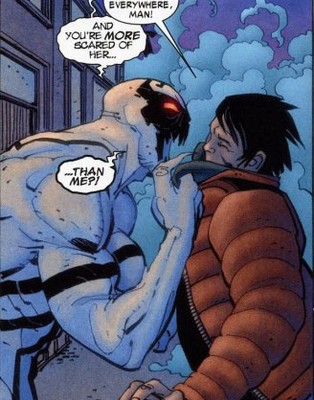 A Zombie Walk To Remember