Someone has a lot of balls.

There is a character death in this issue that trumps any other character death in a long while. For spoilers-sake, I won’t reveal who goes down. But if you’re a GL fan, you’ll know that it’s the guy who no one thought could be killed. That’s the kind of cajones Tony Bedard is walking around with right now.

For those unfamiliar with the current story line, the guardian Krona (the Oan responsible for DC’s multiverse) is back again, and this time he’s captured all the constructs (physical manifestations of each ring’s power). He imprisoned Parallax in the Green Lantern battery, therefore reestablishing the impurity Geoff Johns first introduced in his Green Lantern: Rebirth series. What this does is infect every person wearing a Green Lantern ring, and then turn them against each other.

He’s basically going to destroy the corps from the inside out. But Jon Stewart, the battle hardened heart of the Green Lantern Corps, figures out a way to cut down on the number of Green Lanterns receiving the impurity. And, shockingly, he carries through with it.

Tyler Kirkham should be credited for his impressive pencils in this issue. I’m always in awe of the artists of Green Lantern, and Kirkham has a much more difficult job than usual. Tony Bedard does a nice job of highlighting Jon’s ability to make the difficult decisions that will best serve the Corps, and as always, Kyle provides the voice of reason. Jon and Kyle aren’t as much fun to watch as Hal and Guy, but their seriousness goes far to build the tension Bedard creates in this issue. 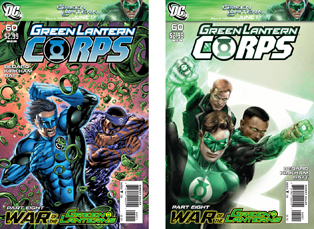 I’m constantly impressed with Green Lantern, in all its forms. They’ve chosen the best writers, and the chemistry between them is palpable. I may dote a little too much on Geoff Johns, but the man knows how to write compelling stories. As proven by Tony Bedard, all the people involved in Green Lantern deserve accolades for their consistently outstanding work.