I’ll start by saying that I’m not a fan of history altering stories.

It’s like the Cosmic Cube — it grants its user unlimited power, yet each time the villain obtains the Cube, he or she squanders it and gets his ass get kicked (see any Captain America story involving the cosmic cube). Similarly, history altering stories allow a villain to go back in time and change someone’s past. If you have the ability to completely destroy someone, why not kill them at birth? It makes the future a lot easier. 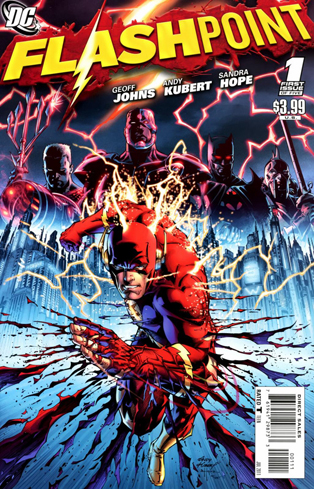 Besides, Geoff Johns has already done this once before in Teen Titans. In the story, the Titans go into an alternate future and confront older, darker versions of themselves (for example, Tim Drake has become Batman and now carries around a pair of .45’s).

Flashpoint involves Professor Zoom going back in time and changing something about Barry’s past. In Flash: Rebirth, Barry’s story was rewritten to make the death of his mother occur at the hands of Eobard Thawne. Thawne is also obsessed with destroying Barry Allen’s life (for a multitude of reasons) and this plays in to the larger Flash mythos.

I can’t say why, but I find Flashpoint to be uninteresting. I’m a Geoff Johns fan. I love almost everything he’s written, how he’s resurrecting DC’s silver age (see Brightest Day), and that he’s going to give Aquaman the Green Lantern/Flash treatment (maybe he’ll make Arthur Curry interesting).

Flashpoint, however, offers readers a glimpse into an altered timeline, but the purposes of the story still elude me. There are cool moments, however, specifically the final page of Flashpoint where Barry figures out the identity of the “new” Batman.

It’s hard not to compare this to Johns’ other big work, Green Lantern. I saw the need for “The Sinestro Corps War” in Green Lantern. I also bought wholly into Blackest Night, and how it was going to affect Hal. Most recently, “War of the Green Lanterns” is occurring in Green Lantern, and Johns has made it clear that the purpose of the story is to show Hal that he doesn’t need to do everything on his own (his relationships with his contemporaries is very poor right now).

As for how Flashpoint will affect Barry Allen? I’m not sure. I don’t see a goal here, other than to tell a story. But to make a production out of this (as any comic book marketing team will do) means that more of an emphasis is put on the story. What I’m getting at is that this could have worked as an arc within the regular Flash comic. There’s no need for all this ornamentation.

In the end, I hope Geoff Johns gives us a reason to care because right now, Flashpoint does not overwhelm me.

Spider-Man Did Turn Off Some of the Dark – Part 2