Act Two of Spider-Man: Turn Off the Dark, which previously began with the cringe-worthy Villain Beauty Pageant now begins with Green Goblin transforming several of his own scientists into the Sinister Six. Insert comic fan outrage. Unfortunately, the extremely silly costumes were exactly the same. I get it, they spent a lot of money and have to use them, but Carnage looked like he came in a box of Count Chocula. 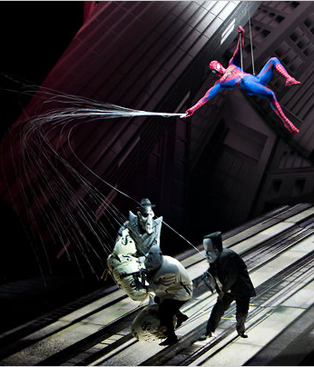 The opening song had yet another self-referential in-joke, but this one was sheer brilliance. As Goblin is singing about his new appearance and powers, he actually sings and I quote directly, “I’m a $65 circus tragedy…” Those of us that caught it, laughed hysterically.

What followed was a lot of scenes of the Six creating chaos – in the case of Swiss Miss prancing about as Priscilla, Queen of New York, beheading the Statue of

Liberty – and we were treated to many new scenes of Spidey wise-cracking and swinging around capturing baddies with silly string. Once again, my hat comes off to the really talented stunt guys, who were risking life and limb for this production.

During the capturing-the-bad-guys montage there was the new addition of having him appear in the audience, which was pretty neat.

And then you see one of the stunt guys sitting in an aisle seat reading a comic book in full costume and waving or the light would shift to another Spider-Man shooting webbing into the orchestra seats from the balcony.  Very cute. Kids liked this part.

Carnage looked like he came in a box of Count Chocula.

Unfortunately, the weird semi-erotic floating in bed scene with Arachne and Peter is still in the show, but at least this time she isn’t hitting on him! Peter gets annoyed and, not wanting to lose her, proposes to Mary Jane. He gives up being Spidey (giving his costume to J. Jonah Jameson as proof that Spider-Man has officially retired.) The Green Goblin, of course, wants to lure Spider-Man out of retirement and the plot moves to its climax.

The confrontation scene is almost exactly as it was in the first production. The major change is that Reeve Carney, bless him, actually got into the harness and swung around. You have to give him enormous credit here. First of all, those rigs don’t have a great track record. Second, he is not a stunt man. One of the big complaints about the first show was that Spider-Man (read: Carney) never actually swung around. This has been rectified and I applaud him for going full throttle on this one.

Spider-Man Turn Off The Dark