On May 6th, Kenneth Branagh brought the Mighty Thor of Marvel Comics fame to the big screen. On its face, the movie looks like a surefire success. Chris Hemsworth, a relative unknown, stars in the title role and is surrounded by such top shelf talent as Natalie Portman, Stellan Skaarsgard and Sir Anthony Hopkins. Critical response to the movie has been overwhelmingly positive and while Thor brought in less money its opening weekend than Fast Five ($86.2 million), the movie’s take at the box office ($65.7 million) wasn’t anything to sneeze at.

Unwinnable contributor Chuck Moran put in $11 of that $65.7 million and he thinks it was worth every penny. Kevin Dreyfuss, co-writer of the forthcoming movie Knights of Badassdom, begs to differ and has challenged Mr. Moran to a verbal duel to prove it. Two men shall enter, but only one shall leave the victor – and with that man will go the fate of Thor, Asgard and the entire World Tree. Verily!

Chuck Moran: This is more than likely the first introduction to Thor for most of the public. I am guessing that, aside from the occasional metal head, Norse mythology is not at the forefront of the average movie goers mind.

I have never actually thought of Thor as a major character, but I do think, given the success of Iron Man, Thor has grown into something marketable. Yes, they changed up the back story a little bit and strayed from the comics, where Thor takes over the life of a mortal man, Dr. Donald Blake. They simply took that out some of what might be troubling for audiences to believe and went with what is solid and righteous. 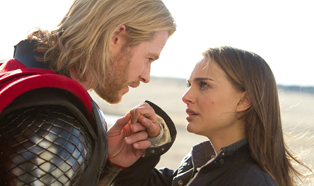 The overly-complex story was taken out of Thor and the only things the viewer needed to do and accept is the fact that Thor and the rest of the Asgardians are gods and Thor has somehow been banished. Director Kenneth Branagh doesn’t care about mortals, because that is not what he is making a movie about. He is making a movie about gods. Viking Gods. I never once doubted Thor, his hammer and his handsome looks.

In the name of science and magic, I accept Thor as Mighty!

Kevin Dreyfuss: Let me start by saying that while I am a big comic book hound I am not a huge Thor fan specifically (even though my great-uncle Paul Reinman inked him for years for Marvel). I didn’t walk into the movie with very high expectations. I guess I just wanted something fun, overblown, violent, something not-lame. And let me be even clearer – lame is not awful, lame is not a giant farting turkey. Lame is just…lame.

Lame acting (the lovely Ms. Portman earns the honorary Michael Caine Phoning-it-in Award); lame, blurry 3D effects for Asgard, which tries to outdo Avatar in stealing from Roger Dean Yes album covers from the 70s; a lame story that can barely summon the energy to go through its perfunctory paces.

I was going to save my crushing blow for the end, but I might as well open with it – my wife loved it. And she did so for two reasons, the left and right pecs of Mr. Chris Hemsworth.

Yes, Chuck, I’m accusing you of loving this film for the beefcake alone. Prove me wrong.

I’m accusing you of loving this film for the beefcake alone. Prove me wrong.

Chis Hemsworth is very handsome and has super charisma. He has charisma with a coffee cup! He sold me when he was George Kirk in the first eleven minutes of the latest Star Trek movie. Thor is a great square peg in ye round hole. This movie reminded me of Starman, and out of place guy, and cute girls helping him. Except there was more fighting in Thor. Even Renee Russo hit someone with a sword.

I thought the effects were great. Asgard was right out Jack Kirby’s artwork. They were even able to squeeze in his silly hat in the beginning of the movie. At one point, Thor refers to Bifröst as “the rainbow bridge.” I think I am OK with that. The United Colors of Benetton sets off to help Thor get back to Asgard – sure, I can get behind that too.

My only complaint is the lack of Scandinavian Viking metal.

If girls and can like a movie about the God of Thunder, rather than a movie about effeminate vampires and werewolves, even better!

K.D.: Hey! You don’t get to close and argument by just yelling out “Final thoughts!” I’m not done! I have more to say!

I’d like to talk more about the structure and the world. The more I think about it, the SMALLER the movie seems. It felt like we were bouncing around 3 different locations over and over and over again, no better than an I Love Lucy episode. For a movie that spanned planets and dimensions, it sure felt claustrophobic.

And as for the 3D, I am always getting slammed by my writing partner for being a shill for it. And he’s right, I love it. And shit, this movie has a guy who flings around a magical hammer. So why did I never feel like it was slapping me in the face (in a good way)?

C.M.: Your writing partner is right – 3D it is a sham to drive up ticket prices and recoup losses due to piracy.

Kenneth Branagh made me feel like I was watching something like a science fiction period piece. He is no stranger to some classic storytelling; I think by using a limited set of locations he gave the audience more of a sense of theater and acting.

This was the most realistic portrayal of a Viking God I have ever seen. Not since The Dark Knight has a character been realized so fully. Robert Downy, Jr. does not count due to how easy how it is for him to play a smug asshole.

The lightheartedness of Thor to me is the same vibe I get with Conan the Barbarian. Punching horses, funny names, silly hats and costumes – all of that is in Thor in one way or another.

K.D.: Okay, now I know you are just saying things to rile me up. The Dark Knight? Iron Man? Conan, for Crom’s sake?!

Here’s the thing about camp. There is no halfway. It’s all in, it’s over the top, it’s beheadings and Rowdy Roddy Piper and meaningless full frontal nudity. Either go there or don’t. The only ones in the movie who seemed to get the tone for me were a thoroughly wasted Idris Elba and the loony but affecting Tom Hiddleston as Loki.

And fine, if you want to say this is the best Viking god portrayal you’ve ever seen. But what other Norse gods are in our comparison set? Ernest Borgnine in The Vikings? 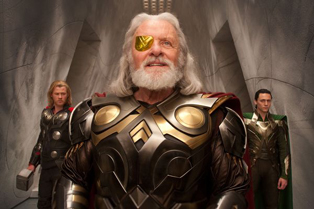 C.M.: Thor was great for all the right reasons, cool effects, fun characters and fighting. Considering that everyone these days seems to think they need to make everything Dark and Edgy, it is nice to just see a handsome man break a lot of stuff with a big hammer and watch cute girls swoon for him.

I don’t suspect a lot of people are going to run around as Thor this Halloween. If they do I’d be surprised. I hope they don’t. I don’t think I can take the public going through another zombie, pirate, ninja phase by adding Vikings to that mix.

On the side of Thor’s hammer, Mjolnir, says: “Whoever holds this hammer, if he be worthy, shall possess the power of Thor.” The mighty hammer has now been passed on to a new champion. From Vincent D’Onofrio’s interpretation in The Adventures in Babysitting and Eric Allan Kramer’s in the TV movie The Incredible Hulk Returns, the hammer of Thor now has a new home in the strong hands of Chris Hemsworth.

K.D.: Okay, that Adventures in Babysitting reference was a nice one. But it doesn’t obviate the fact that you are being far too charitable. We need to stop championing these comic book movies and judging them on faithfulness to the source and production values. We must simply demand they be better as movies.

Demand better, more expansive storytelling and characters as deep as the original books. And can someone demand an end to Stan Lee’s cameos? Oh, and as a pudgy-American, I demand less hunky shirtless actors playing these parts, thanks.

No, I stand by what I tweeted as soon as I left the theater, all full of Twizzlers and bile: “Thor thucked.”

In closing, and in the interest of friendship, I will agree with you on one key point: this movie needed much more Norwegian death metal.

Kenneth Branagh, We Would Have Words With Thee!