This Year’s Sakura-Con, a splendid little anime convention in Seattle, WA, was the first anime convention I’ve attended. I wasn’t entirely sure what to expect, but I had my camera, my Nalgene and my pride, so I thought I was ready for anything. I might not have planned accordingly. 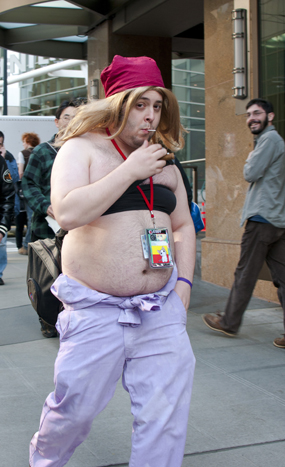 The first thing one realizes very quickly at an anime convention—especially if one only has gaming conventions to compare it to—is that anime conventions are positively inundated with cosplay. There are the ornate, flowing costumes designed by dedicated fans who’ve made their way around a con or two, and who know by now how to maximize both the form and function of their designs. Then there’s the rest of it. There’s the sad cosplay that makes a guy like me reconsider his career trajectory (Man-Faye, anyone?) and then, more sinisterly, there are the poorly conceived, enormously rendered outfits that double, if not triple, the girth of their wearers in a space that’s tight to begin with.

By Saturday afternoon I began to feel left out, and I resorted to joking that I was cosplaying as Saiga from Speed Grapher. The only problem was that I knew nothing of Speed Grapher other than that its protagonist, Saiga, was a war photographer. On Sunday someone was kind enough to explain to me that Saiga suffers from a fetish that causes him to become erect when taking exciting shots. Ah, well.

To keep my spirits up, and to help keep the image of Man-Faye from haunting me, I sought some deeper insights into the world of Otaku and the fluid crossing over between Japanese and American culture. For this fix I needed look no further than the several fascinating panels hosted throughout the weekend by Roland Kelts. Mr. Kelts, whose book, Japanamerica, traces the development of artistic styles through the two nations’ storied interaction, is somewhat of a sociologist. His panels ranged in topic from the apocalyptic obsessions of many anime and manga artists to a deep look into the non-binary, decentralized structuring of Japan’s cities and religions.

An anime convention, however, is not all brains and deep thought (though that is why I was there). There were also traditional tea ceremonies, haiku workshops, a huge exhibition floor, a very entertaining AMV contest and, of course, the nightlife. I made a point of avoiding the concerts themselves, but you couldn’t throw a stone in that convention center without hitting one of the members of Berryz Kobo. Those girls are cute and all, but with nine of them singing at once, is it too much to ask for a single harmony? 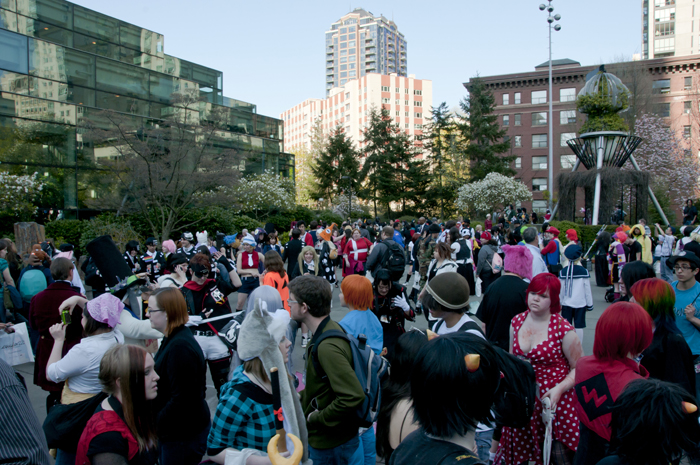 After the whirlwind of the first two days, Sunday was rather subdued. There were a limited number of panels, and, unlike the previous two days, throughout which events occurred around the clock, this day ended around 6 p.m. I was fortunate enough to start my day with a riveting examination of the cultural, religious and folkloric inspirations for Miyazaki’s Spirited Away. The presentation by Lady Librarian (a name you’ll come to know and love if you ever get to Sakura-Con) lasted around two hours, but could scarcely cover the amount of material Miyazaki infused into that masterpiece.

By Sunday’s end I had the keen sense that I wanted Sakura-con to go on forever. From NicoNico’s whiskey giveaway to Mr. Kelts’ endless insights to the throngs of happy people sharing a zest for what they love, the weekend surprised me as much as it left a permanent mark on my memory.