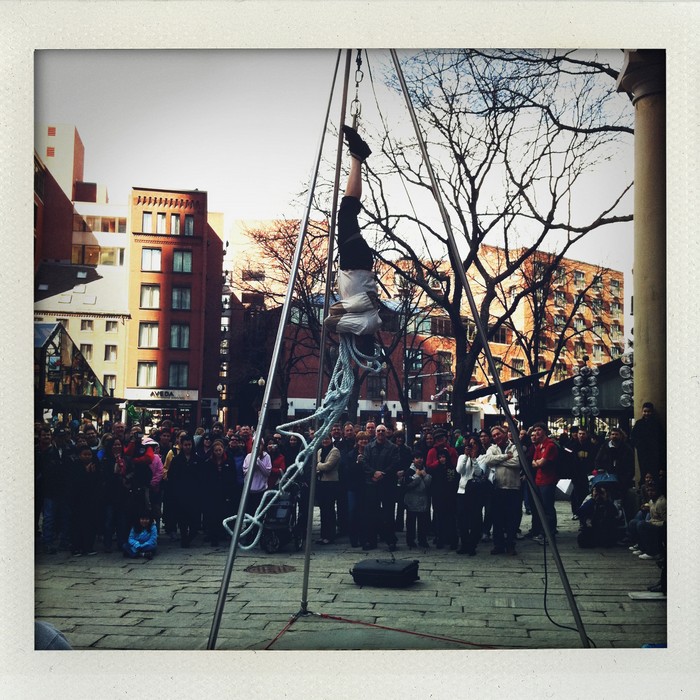 The sun shone on downtown Boston. It was around noon on March 12, 2011. Matt Marrone, Dave Trainer and I had just walked amongst the graves of American patriots and legends.  We were on our way to the greatest monument to capitalism, to the American Way, the quintessential symbol of our founding fathers’ singular dream – Faneuil Hall Marketplace.

The night prior, we’d gorged ourselves on pizza and booze.  Some hurt more than others.  However, Matt, Dave and I were in pretty good shape but we still needed a nice, outdoor walk before returning to PAX East.  We needed the air and the sun; something the Boston Convention Center had no intention of giving us.

Approaching the market, I saw three aluminum poles converging at a 90-degree angle.  In the center of the poles was a harness.  A crowd circled around it. I heard a voice emanating from its center.  The voice was speaking to a woman from Texas.

He wanted her to tie him up.

“We actually have a name for that,” Jason Gardner, A.K.A. Jason Escape told me. “It’s an acronym, L.I.M.O. It stands for large, impressive metallic object.”  He went on to tell me “people will stop, give me a second chance, listen to me, listen to what I have to say.”

It certainly got our attention.  Matt, Dave and I took a break from our quest for Boston memorabilia, macaroni & cheese concoctions and comics to listen to Jason and see just where this show was going.  We watched as he gathered a fairly large crowd around him in front of Quincy Market.  There was a slight breeze running through the city that day, but the crowd loomed around a man daring others to string him upside down in a straightjacket. The scene was reminiscent of what I imagine a Harry Houdini escape looked like.

Jason Gardner grew up just outside of New York City. His grandfather would take him to see the great magicians of the time like David Copperfield, Penn & Teller and Doug Henning.  Afterward, his grandfather would present him with a trick to learn, and Jason would do just that.

As he grew, Jason would go on to perform as a touring musician.  “Magic was always present as a performing option for me but it wasn’t until the 90s where I found myself with a lot of free time, being on tour with bands, traveling around the country and starting to rekindle my love for magic. Then I started out with the same things my grandfather was showing me, simple tricks, and that started to rekindle my love for [magic].”

The chill crept through Faneuil Hall as Jason engaged a man in the crowd.  Now he had two assistants.  He bantered with both of them and joked with the crowd. I looked around and the crowd was laughing and hanging on his every word the whole time. Jason Escape wasn’t even in a straightjacket yet and he already had the crowd on his side.

The people he chose from the crowd were no accident. “I pick a certain type of person. I have a certain description for the cast member I want to hire. These are cast members for me. I have a guy and a girl, an extra guy and a kid. Those are the people that I use in my show.”

Jason convinced the man and woman to lock him up tight in his regulation straight jacket. This was much more interesting than seafood macaroni and cheese. 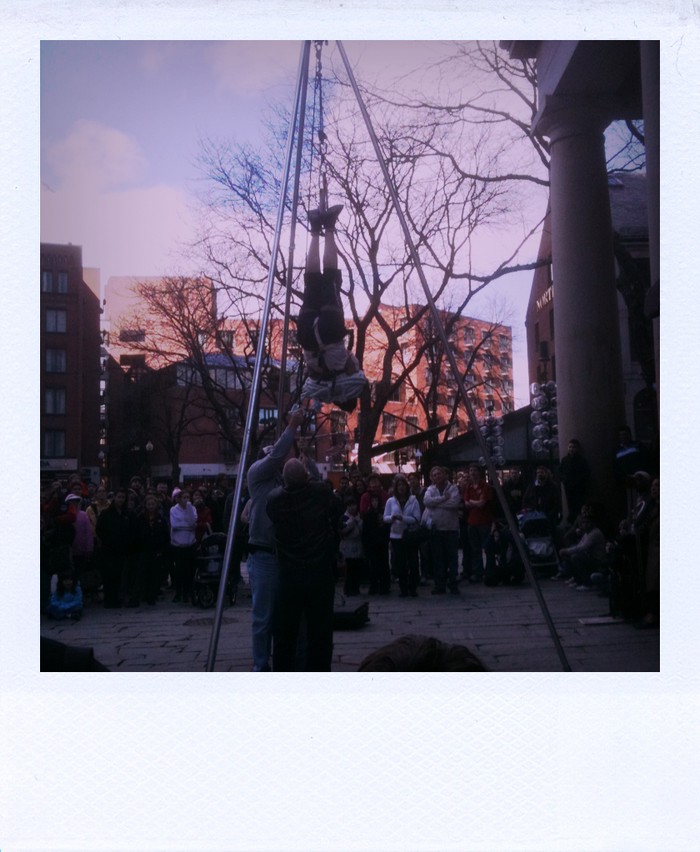 Unwinnable: Just how do you choose your audience?

Jason Escape: The woman, I usually want a married woman with kids because they’re the most relaxed, I find. They know it’s totally safe and I’m not hitting on them. They get it. I get it. It’s great.

The guy, I like to have a guy who looks a little bit metrosexual. I like that kind of vibe because it’s fun and I like those kinds of personality types. They work really well with me.  But that’s just my instinct. I go for people that have that kind of vibe.

The second guy, I look for a responsible guy because he’s going to help me go upside down. So that’s for the task at hand.

I generally look for a kid between 4 and 6 years old. Sometimes I go higher or younger. 4 to 6 year olds will react to the jokes that I have written for them.

When asked about the unpredictability of kids in a live show, Jason said, “I know performers who don’t use kids at all in their shows. It’s definitely more consistent. It’s easier not to, that’s for sure.  But the emotional return, if you get a good one, is great!”

The thing that got me was, here we were, taking a short break from PAX East, the biggest videogame convention on the East Coast, and this was more exciting than anything I saw on the convention floor. That’s not to say I didn’t love PAX, but this was a lot cooler than waiting in line for Mortal Kombat.

“Street theater is very direct. It’s between me and them, there’s nothing else. There’s no ticket, no contract, nothing. They didn’t buy it. They just stopped and watched.”  Jason takes advantage of the interactivity. He jokes with the audience and his volunteers. His act is one of the most enjoyable I’ve seen. 137 years after Harry Houdini’s birth, Jason is keeping the Master Mystifier’s legacy alive.

You can see Jason Escape perform at Faneuil Hall Marketplace Saturdays, drop him a line on Twitter via @jasonescape or visit him on the web at www.jasonescape.com.

You can follow Ian on Twitter via @iangonzales. He promises not to goof on long convention lines until Comic Con International.