Being in a gaming group is hard. Between work, school, kids, conflicting schedules (and sometimes lack of interest in the current edition of an RPG), it is often nigh-impossible to get your friends together and on the same page long enough to run an encounter or two, much less an ongoing campaign.

And for me, a guy who loves to play Dungeons & Dragons with his buddies, this is a bummer to say the least.

So as of late I have been looking for new outlets for tabletop adventuring and although I may have been at first apprehensive of playing a “board game” I decided to give Dungeons & Dragons: Wrath of Ashardalon a go.

I was more than surprised and immediately pleased with the result.

I would even go as far to say that calling Ashardalon a “board game” is almost insulting.

Candy Land is a board game. Wrath of Ashardalon is an exercise in brutality.

Wrath of Ashardalon is a nonstop shoot first and hope there is a later to ask questions game for 1-5 players in a dungeon that develops as you move your characters through it. There is no set “board” so no two adventures will ever be the same. Victory is attainable; however, the threat of defeat is always constant and breathing down your neck. This is a dungeon crawl in all its glory in which the environment is almost as deadly, if not even more, so than the Red Dragon Ashardalon itself.

The encounters unfold as you explore each tile in which monsters spawn and encounter cards are drawn, unleashing disastrous effects and conditions. Each player moves the monsters on their turn, so all the players will finally experience  the zeal of being a half-drunk with power Dungeon Master, attempting to lay waste to all who dare oppose them! Just keep in mind it is only yourself and your teammates you are hurting so I would suggest pulling punches if possible.

Everybody starts at first level and if you have gained enough experience killing monsters, you can level when you roll a Natural 20. You can also cash in your experience to disable traps or cancel encounters. This is, in some ways, more effective than one player leveling up. You unfortunately can’t use experience to cancel out the arrival of Ashardalon which can actually happen on the first turn if you don’t shuffle the encounter deck well enough. In all seriousness though, you should hope you summon Ashardalon within the first few cards because later in the game his arrival doesn’t bode well for anybody. You have at least got a fighting chance against him with a party at full HP. 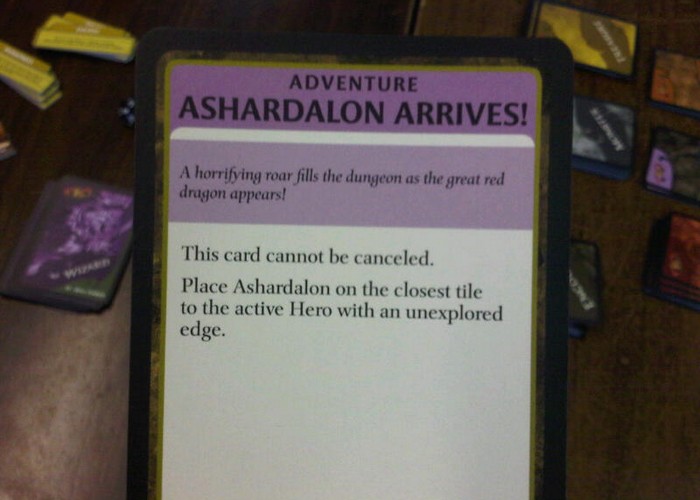 Wrath of Ashardalon comes with 42 miniatures and 13 sheets of Dungeon Tiles, which is great for quick encounters for veterans, or a first time DM looking to get his or her feet wet. The Heroes included are your typical adventuring party (Fighter/Rogue/Paladin/Cleric/Wizard) and the monsters are all the classics from your monster manual (Kobolds/Gibbering Mouthers/ Grells/Legion Devils etc.) plus some mini-bosses that I don’t want to spoil for you and of course Ashardalon.

This game is a perfect introduction to Fourth Edition Dungeons & Dragons with streamlined rules and pure combat. It may not be good for those who long for a deep involved role-playing experience but for anybody who wants a good old-fashioned smash and grab with their buddies on a Friday night this is the game for you.

Just do yourself a favor and READ THE GODDAMNED RULEBOOK! It will be really confusing and not at all fun if you choose not to. Above all else, always make sure you have a Cleric in your party. You’ll need him.

When he’s not wishing he had picked less flammable clothes before entering Ashardalon’s dungeon, he’s on Twitter lamenting the three beers he had before he did. Follow him at @johnmiserable.